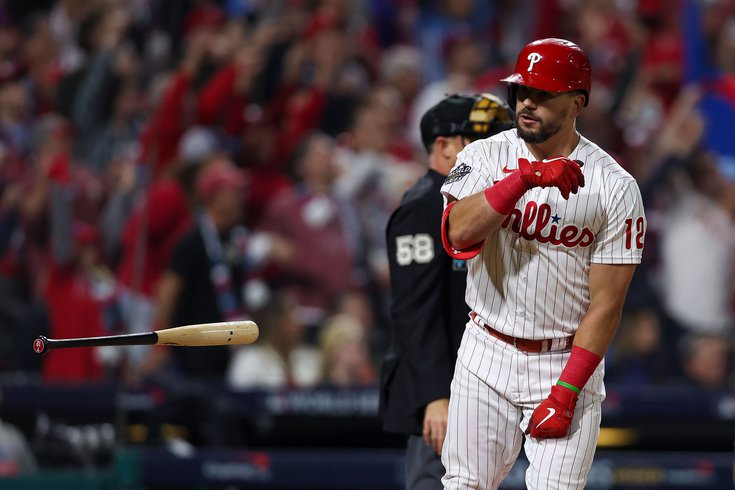 Every time it feels like we know the 2022 Phillies, they pull another rabbit out of their (straw) hat.

After a delay of a day, the World Series returned to Philadelphia and the Phils were ready. They mashed the ball early and often, deflating the Astros in a 7-0 cake walk to take the series lead once again (2-1).

With the Eagles 7-0, the Union about to compete for a championship, the Flyers and Sixers holding their own and the Phillies two games away from winning the freaking World Series — the unofficial capitol of sports right now is Philadelphia.

Before we do it all over again on Wednesday, here's a look back at the latest memorable chapter of this wild ride that just keeps on going:

• Bryce Harper set Citizens Bank Park on fire in the first inning. With one man on and two out, he did what he does — he went deep to right field as the Phillies struck first for the first time in this series. Getting this crowd riled up this early is definitely a brilliant move from a momentum standpoint.

Bryce Harper’s last 2 pitches have been 2 run HRs at CBP!

Pointed out by @JeffPassan

What else can we really say about Harper, the reigning NL MVP and NLCS MVP. The Phillies could have paid him $660 million and it would still be a bargain. He might be the reason this city hoists another title.

• A few minutes after the Bryce bomb to start the party, Alec Bohm flashed some rare power, with a line drive homer that just barely made it over Yordan Alvarez in left field. The 3-0 lead was a nice change from fighting tooth and nail to come back from multiple runs down (like they did in Games 1 and 2 in Houston).

Then, a few minutes after that, Brandon Marsh got in on the act, hitting his own line drive homer to right, shaking up the confidence of longtime Astros starter Lance McClullers. We'll spare you the embeds to stop your computer from crashing. But three homers in two innings will do the job.

• Okay, I know I said no more embeds but the Phillies' leadoff man is a human highlight reel. Schwarber's home run to center was a moonshot and it was absolutely beautiful. In the bottom of the fifth with everything already coming up Phillies, Marsh reached for a second time with a single to bring Schwarber and his bulging biceps to the plate. He let them do the work to get the Phils comfortably ahead 6-0 with the crowd in an absolute frenzy:

And then Rhys Hoskins went yard with his own solo shot. Hoskins has become kind of a home run or bust player this postseason but his home runs have been clutch. Very clutch. And as long as he's contributing in big ways his strike outs are okay.

Five home runs. Maybe save some for Game 4 guys?

• The Phillies got everything they could have wanted in Game 3 from Ranger Suarez, who was originally not slated to pitch this game but the extra day off allowed Rob Thomson to shuffle his rotation. Suarez pitched five scoreless innings, and while he was a little shaky at times, allowing two scoring chances for the Astros, he was able to keep the runs off the board.

Thomson has shown a ton of faith in his bullpen thus far in the playoffs so it comes as no surprise that he was lifted after five frames. The Phillies pen has sort of fallen into set roles — roles that float around a bit to be sure — and the move to keep Suarez in for just 76 pitches might be an attempt for Thomson to call on him as a lefty specialist later in the series before he potentially starts again in a Game 7.

• The Phils offense really saved the pitching staff, as they were able to rely on back of the staff guys like Nick Nelson and Kyle Gibson to seal the deal, preserving their top guys for the future. Yet another benefit of the Phillies big bats.

• There's a reason why Schwarber — a home run hitter with a low batting average — leads off. And there's a reason why rookie Bryson Stott is a prime candidate to do just that next season. Heading into Tuesday's Game 3, the duo had seen 30.7% of all of the pitches taken by the Phillies in the World Series (a total of 332). They tire out pitchers and they work the count and do a lot of things that don't show up in the box score. Of course, Schwarber drew a walk to start the game.

• The Astros left McCullers in the game long enough to give up five home runs to the Phillies and seven runs in total over 4.1 innings. He has been a very solid starter for one of the best teams in all of baseball over the last few seasons — but he was pretty roughed up Tuesday night. Houston manager Dusty Baker kind of hung him out to dry, not yanking him sooner to presumably rest his bullpen for future games. This is the World Series. Surrendering like that is a pretty pathetic message to send to your team, regardless of the tactical impact. The Phillies are thankful for the extra runs though.

• I don't even know if you'd consider it trying to get insurance runs up 7-0, but a single from Nick Castellanos, walk from Alec Bohm and wild pitch helped the Phils stage another scoring threat which would come up empty. It's always nice to keep that muscle fresh, as it won't always be homers and shutout innings as this series continues. But since it was a failed attempt to score and our bad section is lacking, we'll call them out for wasting runners at second and third.

• Jayson Stark wrote it better than me — but I want to pause to just acknowledge that I am covering a World Series game from Citizens Bank Park and it feels like I am floating in a sea of love and joy.

The Astros swung at 7 of them. It's what they do.

All 45,000 people in the ballpark stood, in a constant roar, for every pitch.

The atmosphere at Citizens Bank Park is amazing.

• The Phillies moved me from the main press box to the "auxiliary press" area, you probably saw it on TV out by the left field foul pole. I actually really liked being out with the fans — it was loud as hell — but I also kind of anticipated being in the box with the heat on. So yeah, outside in November in just a sweater and slacks. Smart move Evan. I'll have a jacket and gloves tomorrow. Apologies for any typos in this one by fingers are pretty nippy.