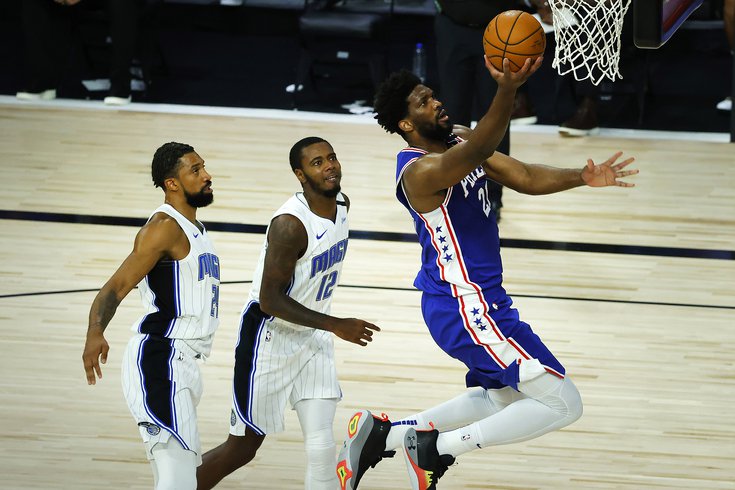 Joel Embiid answered the call in the Sixers first game after losing Ben Simmons to a knee injury.

Behind four 20+ point games, including a breakout performance from bench guard Alec Burks, the Sixers picked up a 108-101 win over the Orlando Magic in their first game without Ben Simmons.

• Through the first 24 minutes of the game on Friday night, Joel Embiid looked like he hardly wanted to be out on the floor. Nikola Vucevic wouldn't let him establish position any closer than about 18 feet out, and Philadelphia's offense looked how you might imagine within those constraints: disjointed and ineffective.

Though he almost certainly wasn't listening to Draymond Green and Charles Barkley at halftime, Embiid did what a lot of people shouting at the TV wanted him to do: stick his ass on the block and go to work.

The third quarter was the start of a second-half parade to the free-throw line for Embiid, who marched to the line eight times in the third quarter and kept coming for more in the final period. His engagement was up on the defensive end as well — we saw Embiid hedge a bit against Orlando pick-and-rolls, something they've historically avoided so he can focus on his No. 1 job, protecting the rim.

Once the big man started to pick it up, the rest of the Sixers followed his lead. They were sharper and more animated on defense, and rather than letting this turn into another miserable loss to an inferior team, they got this one across the finish line. That starts with the big man leading by example.

• If for some reason there was any lingering doubt about Alec Burks' place in the rotation, it should be gone now. Philadelphia struggled to create absolutely anything on offense in the first 24 minutes on Friday night, but luckily Burks has no problem finding (and taking) his own shots.

Burks had a run in the first half where he basically carried Philadelphia's offense, using screens from Embiid to create all the separation he needed for pull-up jumpers or shots at the rim. He capped it off with a four-point play canned over, who else, Markelle Fultz:

If I've said it once, I've said it 1,000 times: having players who can dribble and shoot is beneficial for a professional basketball team. Burks fits the bill, and is adept at using even small gaps in the defense to his personal advantage.

It wasn't all sunshine and rainbows for Burks, and you can still see the limitations he has as the primary creator. When Burks was tasked with doing anything as a creator beyond hunting his own shot or dumping it into the paint to Embiid, the offense got jumbled up again. That, and Orlando attacked him aggressively on the other end of the floor, the same way we have seen teams exploit guys like Furkan Korkmaz or Raul Neto.

But for a guy who should be playing a bench role, albeit a significant one on this team, the warts are easy to live with when he brings something to the table no one else does from the pine. The Sixers haven't had an instant offense guy off of the bench since Lou Williams left town. Having even one potent scorer off of the bench is a game-changer.

(An additional note here — though Brett Brown is often rightfully accosted when he doesn't make adjustments, he did the right thing on Friday night and rode Burks all night, including in crunch time in place of Shake Milton.)

• Burks' emergence threatens to give the Sixers several players who are threats to shoot pull-up jumpers, a basic plank of modern NBA offense that they have lacked for years. We can already see the difference it makes with Milton on the floor (and, in fairness, with a big in the pick-and-pop who can shoot):

Great cut from Harris vs Birch's stunt at Horford. When he goes to recover Harris is already gone. pic.twitter.com/6LtK2zS0yC

Small victories for Philly, but important in the grand scheme of things.

•  Tobias Harris' approach to the offensive glass was admirable. His shots weren't dropping, so instead of allowing himself to turn into a passenger in the game, Harris took matters into his own hands and put points on the board by any means necessary.

This has been the biggest difference, to my eye, between pre-quarantine and post-quarantine Harris. On too many nights since he arrived in Philadelphia, Harris has only been as valuable as his three-point shot. There's blame to spread around there, as he's capable of doing more than spacing the floor, but Harris also allowed himself to fade into the background too often for a guy with his talent.

He couldn't hit water from a boat on Friday night, but Harris was a positive contributor anyway. It's a huge development if it's here to stay.

• Despite the consternation over Al Horford getting a start on Friday night, Philadelphia's other big man had a good night at the office against Orlando. You know, outside of the usual gaggle of missed layups.

The two-big lineups have honestly not been a big issue for the Sixers as long as Ben Simmons isn't also on the floor. Horford has the savvy and the passing ability to find gaps in the defense to slide into as necessary, and though he's not known as a great rebounder, he did an excellent job creating second chances for the Sixers against Orlando.

I don't think the anger about him starting with Simmons out is all that worth it. Do I think Embiid would benefit from having additional guards on the floor instead? Of course. But these two can make it work without a complete non-shooter messing with floor spacing.

• TNT's Stan Van Gundy pointed it out on the broadcast, and he's absolutely right — Josh Richardson does not have the luxury to pass up open threes when they come to him. There were a few times where they were borderline. This one isn't close to acceptable:

It is way too tough to generate an open look from the corners in this league for this not to be a shot attempt from Richardson. pic.twitter.com/1W4p4yHto9

And it's not like Richardson is using the space he is afforded to go directly to the basket or to hunt an even more wide-open shot for a teammate. Most of the time, he's just dribbling aimlessly into traffic and throwing harmless layup attempts off of the backboard. There's no method to his madness, just madness. It's like watching a kid suck down Pixy Stix before expending a bunch of directionless energy.

I'm not sure if I blame Richardson exclusively here, because it's a point of emphasis that should have been made a long time ago. The coaching staff can't influence every single shot attempt, but they ought to have influenced his shot profile more by now.

• Milton wasn't as bad as he was in the first-game disaster against Indiana, but he probably had his worst defensive game of the bubble on Friday night. D.J. Augustin absolutely took his lunch money, and that is not the most reassuring sign as the playoffs draw closer.

As we wait for more news on Simmons' health, something to keep in mind is that Simmons' presence in the starting lineup allows the Sixers to hide Milton on defense somewhat, covering whoever the least dangerous player on the opponent is. That's not necessarily true regardless of who starts in Simmons' absence. Horford is limited in who he'll defend straight up, and if the Sixers go to someone like Burks or Furkan Korkmaz, you're then introducing other weak links in the chain who could be exploited by teams that hunt matchups.

(Thybulle would help mitigate this concern, but he adds to some of their creative problems, I think.)

There isn't a perfect solution, and Milton is going to have to get better in a hurry, or at least leverage what he has better. Though he lacks top-end athleticism, he's long enough to effectively contest shots, so his discipline needs to be on point.

• I honestly respect Stan Van Gundy spending most of the broadcast trying to give Sixers ownership a pitch on how he would hold Embiid accountable. It was an unspoken pitch, and one I might just be imagining in my head, but it sure seems like he has a lot of thoughts on the big man and what is best for him.

I mean seriously, the man even praised Philadelphia's virtual fans in the final minute of the game.