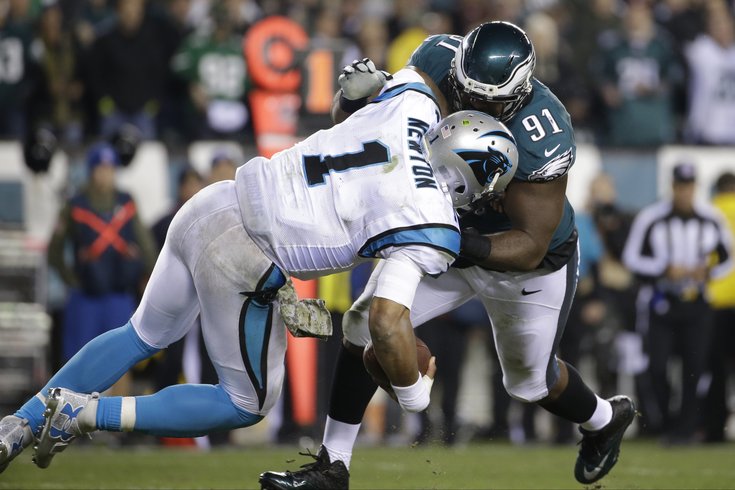 Fletcher Cox with one of the Eagles nine sacks of Cam Newton during last season's 45-21 win.

When you think back on the best games from the Eagles defense a year ago, the 27-0 blackout win over the Giants is likely the first that comes to mind. And while that was an impressive performance -- they forced three turnovers and held New York to just 254 total yards -- it may not have been their most dominating outing of the season.

That's because a few weeks later, the team had another primetime matchup, this time against the Carolina Panthers, in which the defense (and special teams) stole the show. In that game, a 45-21 win for the Birds, the team scored 35 unanswered points and led 45-7 before Carolina added two garbage time touchdowns from Kelvin Benjamin to avoid total embarrassment.

By the time the dust had settled, the Eagles defense had recorded nine (NINE!) sacks against tough-to-bring-down Cam Newton and had forced a season-high five turnovers, including four (3 INT, FUM) by the former Heisman winner. It was so bad for the Panthers that Bradley Fletcher (remember him?) took one of Cam's three interceptions 34 yards for a touchdown. The other interceptions belonged to a pair of fellow former Eagles, Nate Allen and Cary Williams.

And if that wasn't enough, Darren Sproles returned a punt 65-yards for a touchdown.

It was an awful day for the Panthers, one that may have been impacted by the fact that Newton was not even close to 100 percent. Not only was he dealing with a left ankle that was surgically repaired in the offseason, but he was also fighting through a right foot injury, one that may have been the result of overcompensating for his ankle.

That certainly played a role in the 6-6, 260 quarterback being sacked more than any other game in his career. He was limping noticeably throughout that game, and not just because of all the pressure from the Eagles front seven.

This season, that's likely not going to be the case.

"I think Cam [Newton], last year, was different," head coach Chip Kelly said Thursday of his team's success against the Panthers QB last season. "Cam was coming off an ankle surgery and wasn't really running. They weren't really running him that much. He's playing different this year, so -- I've said it before -- I don't think a lot of the things we did last year are really what we're going to be doing this year."

The Panthers never found their rhythm in 2014. Their loss to the Eagles came during a 1-8-1 stretch for Carolina, who somehow still wound up in the playoffs with a 7-8-1 record, thanks in large part to an absolute horrendous NFC South. And despite the fact that they won a playoff game -- they beat a Ryan Lindley-led Cardinals team -- they were nothing close to the team they were a year earlier, when the failed to win a postseason game even though they finished the regular season with the second-best record in the NFC (12-4).

Much of the reason for their success has been the health of Newton, who has thrown for eight touchdowns, rushed for three more and has only turned the ball over five times (4 INT, FUM). Furthermore, he's only been sacked ten times -- one more than in last year's meeting with the Eagles -- through his team's first five games. Carolina is also first in the NFL in turnover ratio and sixth in points scored this season.

None of this, however, is lost on the Eagles. And they expect a healthy dose of ground-and-pound from a physical Panthers offense.

"They lead the league in rush attempts and the challenge there is, they're going to try pound you," Kelly said Thursday. "And they've got a back in Jonathan [Stewart] who is a big, physical, downhill running back. And then you have a quarterback -- you know, it's different than other zone-read type teams you face where it's a quick, agile quarterback that's going to break outside. Cam [Newton] can pound you too, because he's got to be the biggest quarterback in the league from that standpoint rushing -- him and Roethlisberger, but [the Steelers] don't run Ben. [The Panthers] run Cam. So I think they're just going to try to wear you down, pound you a little bit. I think their offensive line is built that way; I think their running game is built that way. So it's if we can stand in there and go toe-to-toe with them that's going to be the challenge for us."

But as the Seahawks learned on Sunday, Carolina can beat you through the air as well, something Davis was quick to point out.

"You know, Cam is really -- it does jump out at you, the progression he has made over his career, and this year he's really running the offense at a high rate right now," he said Wednesday. "You're going to get your runs from him, which is unique to the NFL; you're going to get about eight to ten runs from him that you have to prepare for. But probably more impressively, is how he has kind of settled into the passing game; he's not making mistakes; he's taking what you give him, and he's moving the ball a little bit. He did a great job on the last drive at Seattle."

But Davis believes his defense is well prepared to handle a dual-threat like Newton, largely due to what they saw in training camp practicing against, presumably, Tim Tebow.

"One thing about Cam is you can spy him and run with him, but then can you tackle him? Because he's so good."

"Yeah, the bonus that we have is what we practiced against all off-season," Davis said. "So the read option, the triple option, all the different variations of the run game that they have, we at least, as a defense, work on it and have the conversations in the off-season. Now, we haven't had it in six weeks, so we have to dust those conversations off and focus on it. But, it helps us in the sense that it's not brand new to us like a lot of NFL teams I've been with all said we hit ‘this’ offense and it's a brand new conversation that you didn't have in the off-season. So at least we've had it in the off-season."

As for how Davis plans on containing Newton Sunday night, he'll likely try something similar to what seemed to work so well last year. Connor Barwin, who was responsible for 3.5 of the Eagles nine sacks in their Week 10 win a year ago, spent the majority of the game spying Newton. And you can expect to see more of the same this time around.

"I think no matter what percentage he is, you spy [Newton]," Davis said. "Well, you move in and out of it. You can't just sit in a three-man rush all day and spy him, you want to go four and fives. You just have to be real disciplined that you're blitzing as a group and people are in the spots that they're supposed to be in because even the blitzes are designed to have a nice little pocket that we keep him in.

"But he's such a playmaker, you have to plan on keeping him in there, but the athleticism kicks in and it's about a bunch of effort trying to get him and taking good angles. He's going to make his plays. Athletes like that make their plays, and we have to keep it to a minimum."

Barwin's success in that role last year makes him the most likely candidate to do that again this season. If Mychal Kendricks is healthy, you may also see him mixed in against the Panthers and perhaps a few looks at Jordan Hicks. However, Davis believes Barwin is perfectly suited for the task of spying Newton.

"One thing about Cam is you can spy him and run with him, but then can you tackle him?" Davis added. "Because he's so good. So Connor has got a good mix of size, speed and athleticism, and is a good match-up. So we did spy him last year with Connor, and it was because of how big he is."

A year later, and Newton is just as big. Only this time, he's healthy.

And that means the Eagles will have their work cut out for them.