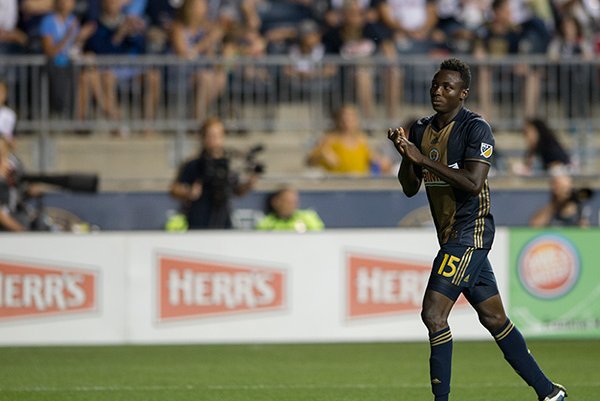 Josh Yaro was sent off in the 53rd minute of the Union's 2-2 draw with Atlanta United.

In typical knee-jerk Philadelphia reaction, the popular thought right now is that Josh Yaro should sit his butt on the bench for the remainder of the 2017 season.

That's a natural response when a second-year defender makes his fourth mistake in his fourth start, costing his team three points for the second time in seven days.

You wonder, however, how many of those people calling for Yaro's benching were earlier clamoring for Keegan Rosenberry to see the field after losing his job to Ray Gaddis and sitting on the pine for more than four months.

"Why is Gaddis playing?!"

It's a weird time for Union youth development, with great strides being made at the academy level while first team youngsters are seemingly mired in sophomore slumps.

This season Yaro has scored an own-goal, conceded a 95th-minute penalty, earned a 54th-minute red card, and scrubbed a clearance leading to an eventual game-winner.

But manager Jim Curtin has his player's back, and twice this week doubled down on giving him more playing time.

"Listen, Josh is a center back who hasn't even had 20 starts in MLS," Curtin said Wednesday at his midweek press conference. "That's a little bit over half of a full season. He's early into his career. Have there been mistakes? Absolutely, but at the same time we've also seen good games. We've seen good work in training. He hasn't had consistent reps because of injuries, so a lot of variables go into it. He's still a guy I believe in and obviously has the physical tools to play in MLS, that is for sure. He's towards the top of that in MLS as far as speed, athleticism, and reading the game. It's now about finalizing those pieces of decision making in and around the box, which is, for a center back a critical tool."

That quote mirrors what was said after Saturday's 2-2 draw, a game in which Yaro was sent off for hauling down Josef Martinez as the last man back, a situation known in our sport as "DOGSO," or denial of a goal-scoring opportunity.

I asked Curtin post-game if the Union can afford to keep Yaro in the starting lineup, considering the errors.

"You have to," Curtin said. "He's a good young player and, again, with young players there's always going to be a learning curve, so he has to continue to go out on the field. We believe in him. He's a guy who is a young center back and still, he's devastated right now, of course. He feels like he's let the team down and that's a hard thing to go through. We all feel for him, but we are a team that will stick together and, again, the group, I can't fault any of their effort because no matter who's on the field, no matter how difficult the situation, the travel, the tough loss against Toronto, these guys roll up their sleeves and they give everything. Again, it was a tough night, but yeah, Josh will continue to play. He's a young player that we believe in and a guy that will only learn and get better from these kinds of moments, as difficult as they are."

Josh Yaro sent off for a DOGSO pic.twitter.com/tzAZ8QIF80

For what it's worth, Yaro, who is suspended for next week's game in Minnesota, will play Thursday with Bethlehem Steel in Orlando. That should be another 90-minute shift to go along with the 173 he's already played in USL this season.

That complements the 369 minutes he's logged for the first team in a season that was stunted from the start due to a winter shoulder injury that kept him out four months.

He suffered two concussions, two shoulder injuries, and an MCL sprain in an eight-month span that began last spring. That resulted in spotty stretches where he did not start more than two games in a row after May 25th of last year.

That's a statistic worth repeating:

Josh Yaro has not started more than two games in a row since last May.

Going from there, he only started 12 of the Union's next 49 games, putting together a couple of back-to-back appearances in the game day XI before going right back to the bench. Part of that was due to Curtin's use of Ken Tribbett last year, but the injuries were also a huge issue.

More than anything, he needs consistency, not an extended benching ala Rosenberry. You can't find out how good a young player is if he's sitting on his rear end.

Plus, he's probably part of a four-deep center back corps that does not include current starter Oguchi Onyewu. "Gooch," who has been very good this season, is 35 years old and nearing the end of his career. The future of the Union CB position is some combination of Jack Elliott, Josh Yaro, Richie Marquez, and Auston Trusty, four players who are younger than 26.

It's a waste of minutes in September and October if Onyewu is on the field in lieu of Yaro. No disrespect to Onyewu; it just is what it is, and he understands that.

Plus, you're looking at valuable experimentation time for possible combinations. Elliott, for instance, plays LCB when paired with Yaro, but plays RCB with Onyewu. Can Elliott successfully pass the ball on the left at the same high level he does on the right?

You have the potential for one of the best CB passing pairs in MLS, guys who can do things like this:

Furthermore, is Rosenberry better when partnered with Yaro or Elliott?

Does Giliano Wijnaldum have more chemistry with Onyewu or the other center backs?

Those are the situations you're trying to figure out right now, instead of kicking the can down the road and into next season.

"How can you justify putting him on the field when he's made critical errors?"

And my response is:

"Well, the Union aren't making the playoffs anyway, so let's get the youngsters out there."

We can't decide whether or not Josh Yaro has a future if he's sitting on his ass. But if it turns out he's not the answer moving forward, at least we're coming to that realization sooner, rather than later.