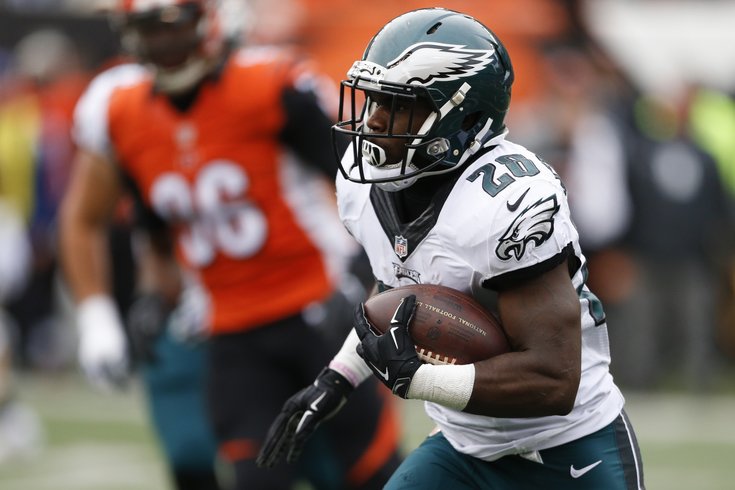 You may as well give Ryan Mathews' carries to Wendell Smallwood.

The Philadelphia Eagles aren't officially eliminated from playoff contention just yet, but they are certainly more than on their way. FootballOutsiders.com gives the Eagles a 5.5 percent chance of making the playoffs, while FiveThirtyEight.com gives them a two percent chance. That's better than Lloyd Christmas' chances with Mary Swanson in Dumb and Dumber, but obviously not good.

If When the Eagles' playoff chances go from slim to none, Doug Pederson acknowledged that it would probably make sense to play some of the younger guys to get a closer look at them.

"I think you can definitely go down that route," said Pederson. "You can go down that path. Isaac [Seumalo], a couple weeks ago against Green Bay, played the entire game. That was great experience. He is playing sort of that tight end position for us, and he's done an exceptional job there. I think you can make a case or an argument for playing those guys and getting them some play time these last couple of weeks."

Many of the Eagles' young players have been forced into action already this season as it is, but here are the playing time moves that might make sense:

Seumalo has already started one game this season at RG when Brandon Brooks was hospitalized with an illness, and he played well enough that you would have enough faith that he won't get Carson Wentz killed.

However, there is a short window of opportunity to get Seumalo another start, as Lane Johnson will be returning from his suspension Week 16. When he does, Johnson will likely move immediately back into his RT spot, which will mean that Allen Barbre will once again be back at LG. While it makes sense to me to replace Wisniewski with Seumalo, I would not replace Barbre, as Barbre has had a very good season playing multiple positions and deserves to play out the string.

Mathews' career with the Eagles could be coming to a close soon, as the Eagles can save $4 million against the cap if they cut or trade him this offseason. That feels like a no-brainer. Since Smallwood has more of a future with the team than Mathews, you may as well let the young guy get some reps.

Because, well, why not? If Smith doesn't play well, it's not as if that'd be much of a change from McKelvin, so you may as well see how Smith responds to a big opportunity.

It doesn't really matter how you get Burton on the field more, or who loses snaps to make that happen, but Burton is long overdue for a much bigger role in an offense devoid of players who, you know, make plays.

Curry doesn't exactly deserve a significant promotion after turning in a 1.5-sack, zero forced fumble performance this season after signing a highly lucrative deal this past offseason. However, Barwin is likely to be a cap casualty this upcoming offseason, while Curry is going to be on the roster for the foreseeable future. You may as well give Curry a chance as a full-time player in regular season games to get a better evaluation of what you have in him, which somehow remains something of a mystery.