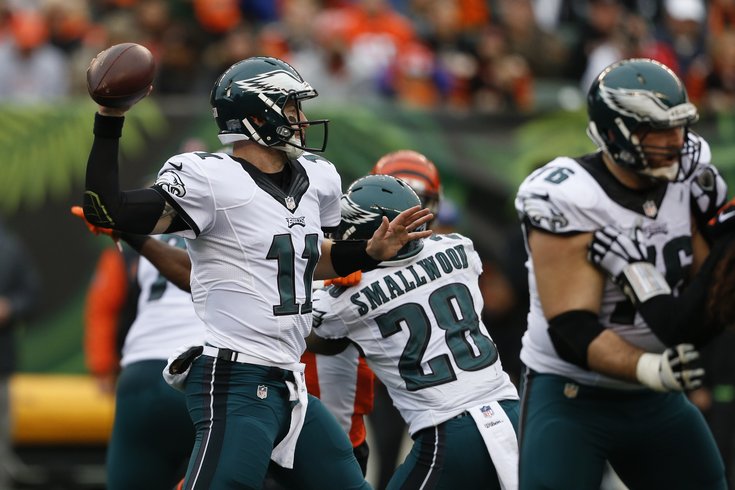 Carson Wentz's play has fallen off, although to be fair his arm is probably tired from the 800 (estimated) passes he has thrown so far this season.

The Philadelphia Eagles are three-quarters of the way through their first season under Doug Pederson and are now a disappointing 5-7 after a 3-0 start. Let's grade the Eagles' third-quarter performances individually, starting with the offense.

The key number in the graph above to note is Wentz's 177 pass attempts, an absurd number that is far too high. Wentz is on pace to have the second-highest pass attempts by a rookie in NFL history:

Here's what we wrote about Wentz in our NFC Hierarchy/Obituary:

The Eagles' wide receivers are the worst in the NFL, the cornerbacks can't cover, their right tackle got pinched for the second time for PEDs and the offensive line has had to be juggled all season to account for that, the defensive line forgot how to rush the passer, their linebacker got arrested twice for "dumbass" offenses, their running backs can't just hold onto the football when they have the lead late in games, the tight end literally jumps out of the way of blocks, and the rookie quarterback coming from an FCS school in North Dakota is being asked to put all the above mess on his shoulders and win games.

Wentz's play has fallen off as the season has progressed. However, it's fair to note that his offensive line has lost players, he has lost key skill position players along the way on a team that didn't have much to begin with, and now the defense is playing like crap, which doesn't help. A rookie quarterback is simply never going to overcome the hand Wentz has been dealt this season.

MORE ON THE EAGLES: Week 14 NFL picks | Jordan Matthews, Ryan Mathews likely to play on Sunday | Pederson not throwing in towel even though Eagles all but done | Is Carson Wentz struggling because the Eagles stink, or do the Eagles stink because of Carson Wentz? | All-22 view of the Zach Ertz olé block looks even worse

Mathews actually had two good games over the last quarter of the season. He went for 19-109-2 against the Falcons and was off to a good start against the Seahawks (7 for 31) before he got hurt.

Unfortunately, as usual, Mathews missed two games. Normally, we wouldn't penalize for injury, but when it's been perhaps the biggest theme of one's career, it's perhaps a little too hard to forgive.

Sproles has only carried the ball 14 times over the last four games. The damage he has done has mainly been in the passing game, where he has caught 20 passes for 146 yards and no TDs. After a stellar second quarter, Sproles has been quieter during the third quarter.

Smallwood's third quarter numbers: 43 carries for 174 yards (4.0 YPC), 5 catches, 41 yards, 0 TD. With Mathews out the last two-plus games, Smallwood has gotten more opportunities, although one could argue the Eagles ran less because they were without their starting running back. Smallwood has shown that he can be a contributor in this offense going forward, but I don't believe that he made the most of his opportunities with Mathews out.

Barner can't get on the field for some reason, even though he has looked good whenever he has gotten opportunities. He did have a 61-yard kick return against the Bengals. Sooooo... B?

During the third quarter, Matthews had 15 catches for 179 yards and no TDs in three games. That's underwhelming production from the Birds' best receiver.

Win or lose, it seems as though Agholor is a goat almost every week, and not the cool version of "GOAT." Against the Seahawks, Agholor ruined a 57-yard touchdown to Zach Ertz when he did not line up on the line of scrimmage. The Eagles were called for an illegal formation penalty, which negated the touchdown, eventually leading to a punt. On the very next possession, Agholor dropped what should have been an easy catch that probably would have been good for about 30 or so yards.

It's one thing if you're not making plays. It's another thing if you're dropping passes and actively messing up opportunities. It's a whole other level when you can't even line up properly.

Agholor was benched, came back, and the general consensus was that he was MUCH IMPROVED after a 4-catch, 26-yard performance, lol.

With 15 catches for 165 yards and 1 TD, Green-Beckham has statistically been the Eagles most productive receiver over the last quarter of the season, sadly. The bright side is that Green-Beckham has legitimately improved the last three games.

In his first NFL action against the Giants, Treggs caught two passes for 69 yards (including a 58-yard bomb). He has one catch since.

I don't care what Ertz's numbers are. In the last five games, Ertz has slid...

And then produced the lowlight of the season (in my opinion) on this olé block:

In fairness, he did play through cramps:

Ertz: "That one play has come under a lot of scrutiny, but... I cramped up during the game and still went out there and battled.each play."

Celek has two catches over the last four games and only seven all season, but we'll bump him up a letter grade for having the restraint not to punch Ertz in the face after his "playing through cramps" comment.

Whenever the Eagles have given Burton chances to make plays, he has. The Eagles' staff should consider using Burton more than they are, whether that means fewer snaps for Agholor, Ertz, Treggs, or really anyone, frankly.

Peters remains a very, very good LT, even if he isn't the elite player he used to be. The Eagles really need Peters to play one last season in 2017.

Barbre has really proven to be a valuable asset this season. He has played well as a starter at LG and has held his own after being asked to kick out to RT. Plus he did this to Clay Matthews:

It's clear that Kelce really struggles against bigger interior defensive linemen and has for a while. However, that has been offset in the past by Kelce getting out into space and making impressive blocks on the run. During the first half of the season, the Eagles weren't even getting that out of Kelce. Over the last four games, however, he has played much better, especially against the Seahawks, when he had an outstanding game.

Brooks has been OK. He's done a nice job in pass protection but has not gotten push in the run game that you would expect of a man his size. Brooks unexpectedly missed the Eagles' game against the Packers due to an illness.

Johnson's absence has significantly limited what the Eagles can run offensively.

Vaitai had a rough initiation to the NFL in his first few games vs. the Redskins, Vikings, and Cowboys, but has played better more recently. Ideally, Jason Peters will play one more year, which would allow Vaitai to continue to develop behind the scenes.

Wisniewski has been a quality reserve for the Birds this year.

Seumalo got one start against the Packers when Brooks was hospitalized the day of the game. I've only casually watched the offensive line in that game without specifically zeroing in on Seumalo, but both Doug Pederson and Frank Reich both noted that he was up and down.

With so many other glaring issues on the team the last quarter, Sturgis was quietly shaky, connecting on 5 of 8 field goal attempts.