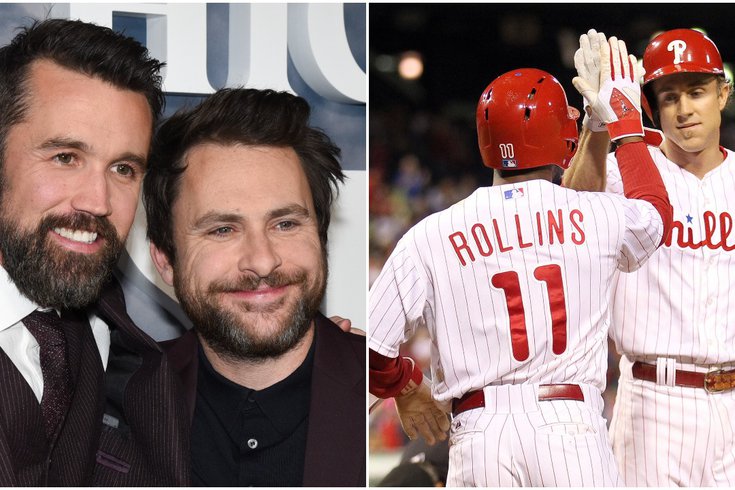 Rob McElhenney, Charlie Day, Chase Utley and Jimmy Rollins recently all got together. McElhenney shared a photo of their golf outing on his Twitter account.

Rob McElhenney finally got to have a catch with his self-proclaimed hero Chase Utley two years ago at Citizens Bank Park, and now the actor has a round of golf with the former Phillies second baseman under his belt, too.

In a scene that could easily be mistaken for an "It's Always Sunny in Philadelphia" episode, McElhenney, Utley, Charlie Day and former Phillies shortstop Jimmy Rollins recently played 18 holes together, McElhenney shared on his Twitter account.

"That's a whole lotta Philly in one photo. Minus the background," McElhenney wrote. "Go Phillies!!," he added.

That’s a whole lotta Philly in one photo. Minus the background. Go @Phillies!! pic.twitter.com/aeW6VcJr6Z

McElhenney, who plays Mac on the show, and Day, who stars as Charlie Kelly, playing a round of golf with Philly sports superstars could be a believable "Always Sunny" storyline. The other three members of "The Gang" were nowhere to be found, but that's typical of the show.

Many "Always Sunny" episodes features two members of "The Gang" doing something obnoxious, while the other three are up to something else equally ridiculous. If Dennis, Sweet Dee and Frank Reynolds weren't on the golf course, one can only imagine what that trio would be up to.

Over the course of the show's 14 seasons, the Phillies have been featured in a number of "Always Sunny'' episodes. One episode during the show's fifth season dealt with problems "The Gang" encountered during Game 5 of the 2008 World Series, when the Phillies clinched their second title in franchise history.

But maybe the most well-known Phillies storyline came the following season, when McElhenney's character wrote a love letter to the six-time All-Star Utley and asks him to have a catch.

Utley and former Phillies first baseman Ryan Howard appear later in the episode at a charity benefit and hang out with a very drunk Dennis, played by Glenn Howerton, and Charlie.

Utley responded to Mac's love letter in 2013, and the two shared a hug and finally had their catch together at Citizens Bank Park in 2019 when Utley threw out a ceremonial first pitch to the "Always Sunny'' creator. Both McElhenney and Utley live in Los Angeles and remain good friends.

McElhenney and Day's round of golf with Utley and Rollins comes as speculation swirls as to when the show's 15th season will debut. Season 15 has already been delayed due to the COVID-19 pandemic.

McElhenney, Day and Howerton spent much of the pandemic writing scripts for the forthcoming season, which is expected to deal directly with the public health crisis and other political themes.

In recent months, some of the show's stars have teased photos for the upcoming season, including the Philly native McElhenney standing outside of the Paddy's Pub set.

"It's Always Sunny in Philadelphia" has already been renewed for four more seasons on FXX, which will give the show at least 18 seasons and make it the longest-running live-action comedy series in U.S. television history.