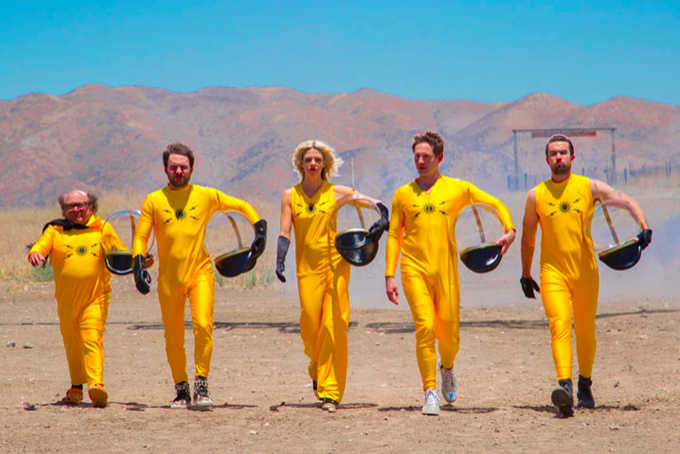 "It's Always Sunny in Philadelphia" co-creator Rob McElhenney is writing episodes for the show's 15th season, making the most of his quarantine time during the coronavirus pandemic.

As people around the world binge television at astronomical levels, there's an uncomfortable reality to the fact that production on new shows and movies had largely ground to a halt.

"It's Always Sunny in Philadelphia" creator Rob McElhenney was among the first to advocate loudly for studios to continue paying staff who have been laid off as a result of the coronavirus pandemic. It's not clear whether he's been able to move forward on his initial plan to resume production for his Apple TV series, "Mythic Quest: Raven's Banquet."

What we do know is that McElhenney is taking his time at home to work on new episodes for season 15 of "It's Always Sunny in Philadelphia."

Am I writing in heaven? Nah this is quarantine. But it kinda feels like heaven today. I’m feeling especially grateful. You watch our shows, which provides us great rewards. I promise to honor that support by taking this time to write a whole lot more of those shows so that we can keep you laughing. I think we can all agree that when this is over, what the world will need most, are more dick jokes. I’m happy to oblige. 💪 💪 💪 💪 🍆 🍆 🍆 🍆 @alwayssunnyfxx @mythicquest

"I think we can all agree that when this is over, what the world will need most, are more d*** jokes," McElhenney said. "I’m happy to oblige."

In a comment on the post, McElhenney's wife and "Always Sunny" co-star Kaitlin Olson replied, "Go fold some laundry."

The 15th season of "It's Always Sunny in Philadelphia" will make the series the longest-running live-action sitcom in American television history. It's probably a good thing that McElhenney, Charlie Day and Glenn Howerton are writing it while collectively out of their minds.

McElhenney and Olson recently raised more than $100,000 for the hunger relief nonprofit Philabundance to assist in the Philadelphia region's response to COVID-19.

It's hard to predict when "It's Always Sunny in Philadelphia" will be able to return, but it's refreshing to see that McElhenney is feeling inspired to get the ball rolling.