Watch: Chase Utley threw a first pitch to Rob McElhenney — er, Mac — and then they hugged 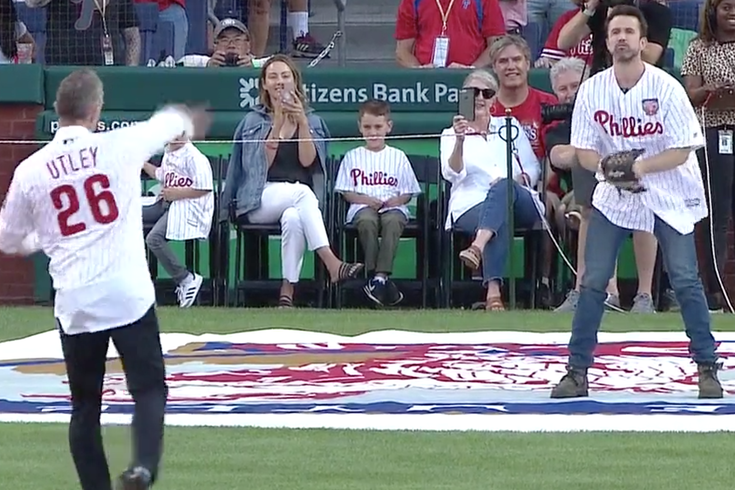 Fulfilling an "It's Always Sunny in Philadelphia" prophecy, Rob McElhenney and Phillies legend Chase Utley have a catch.

It was Chase Utley Night at the Phillies' Friday evening matchup with the Marlins, a proper sendoff to a storied career.

In true Philadelphia fashion, Utley said goodbye with an insular, silly inside joke about the city's favorite television show, "It's Always Sunny in Philadelphia", by throwing a pitch to actor and show creator Rob McElhenney.

No, we're not kidding. Mac and Chase finally had a catch:

The hug after the pitch-and-catch was a very nice touch from the pair, who couldn't have been playing more into the assembled fans' collective emotions if they'd tried.

MORE: The Sixers are getting a quality kid in Washington's Matisse Thybulle

In case someone you've made it this far into the story and you still don't know the history behind Chase Utley and Rob McElhenney's great romance, here's the first video you need to watch:

Pretty self-explanatory and hilarious, right? Right. Good. We're all on the same page so far. That episode aired in December of 2010.

Now, moving on to the second video you'll need to watch:

There are multiple layers to this!

As you can see, this fantastic moment was nearly a decade in the making, complete with twists and turns. It's basically the most Philly way for Chase Utley to acknowledge the fans before he rides back to Los Angeles -- where, interestingly enough, Always Sunny is working on its latest season, and where Utley and McElhenney semi-regularly hang out.

This city, its sports teams, and its people are all so weird.