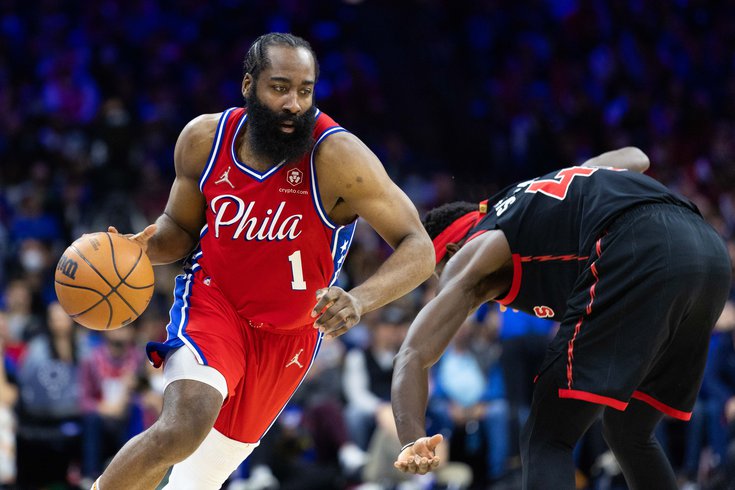 James Harden will opt out of the final year of his contract and become an unrestricted free agent this summer, a source confirmed to PhillyVoice on Wednesday. The expectation is that Harden will come to terms on a new contract with the Sixers when free agency opens, potentially clearing a path for the Sixers to make an impactful addition to the roster.

Harden's decision to forego the final year of his contract is an interesting one, and reading the tea leaves a bit here, the simplest explanation is the most likely one. In his final presser of the season, Harden left the door open for numerous possibilities this summer, offering a quote that's even more relevant now than it was then.

"I'll be here," Harden said in May when asked about whether he'd be opting into the final year of his deal. "Whatever makes this team, whatever allows this team to continue to grow and get better and do the things necessary to win and compete at the highest level."

The next step unfolds on multiple fronts, with the two most pressing questions as follows:

Given that it was essentially taken for granted that Harden would pick up the option and claim his $47 million and change, I will not make any assumptions on what the next deal is going to look like until I have the exact numbers in front of me. Unless otherwise noted, the numbers I'll use below are strictly hypothetical to help explain how the Sixers are impacted.

As explained in our story from Wednesday morning, if Harden were to sign a three-year deal at a rate of $40 million per year, that would dent his 2022-23 cap hit by $7,366,760 compared to what he would have made by simply opting in. In that theoretical scenario, the Sixers would have a total team sheet of $144,322,905 for their roster of 13 players heading into free agency. A Harden pay cut of that size would provide them with enough room to sign a player to the full, non-taxpayer mid-level exception (estimate: $10.5 million), though additional player movement would likely be necessary in order for the Sixers to finalize a 15-man roster, as use of the non-taxpayer mid-level exception would put them under the restraints of the hard cap.

Another wrinkle to keep in mind: depending on how much of a discount relative to his option Harden takes, the Sixers may also have access to the bi-annual exception, which ESPN's Brian Windhorst floated as a possibility on Wednesday. The BAE can be used once every two seasons to sign a player for up to two years at a number above the minimum level while they are operating as an over-the-cap team. The BAE is estimated to be worth around $4.1 million based on current cap projections, a number that would allow the Sixers to have access to a slightly stronger pool of players than they would if they filled out the roster with minimum-salary players. And if they are hard-capping themselves by using the non-taxpayer MLE, there's no real downside to using the BAE this summer, outside of the fact that it brings them closer to the apron than a minimum deal. Expect some further financial wiggling and roster shaking if they go this route.

In the event that they free up access to the bigger mid-level contact via Harden's opt out, all those rumors about their interest in free-agent forward P.J. Tucker start making a lot more sense. Paying a 37-year-old in the neighborhood of $10 million per year over three years would be a steep price to pay, but the money is not especially relevant outside of what they lose in flexibility as a hard cap team. The only real difference between giving a free agent (Tucker or otherwise) the full mid-level or a portion of it is the amount of money they would have left over to potentially sign someone else or absorb in a trade, whether that comes right now or later in the season.

All of this assumes, of course, that Harden is going to return to Philadelphia in the first place. Throughout the season, Harden expressed his desire to be here long-term on several different occasions, telling the media he was happy here and that this was where he wanted to be all along. There are hardly any threats to sign Harden away outright this offseason, at least not teams with any realistic chance to make a potential run for a title next season. So while we do have to wait for him to put pen to paper, all signs up to this point have pointed in the Sixers' direction, and this latest move points to Harden's willingness to work with the team to further flesh out the roster.

"For me personally, it's been a long year. But since I've been here, it's been great. We just tried to build something so fast," Harden said during his exit interview in May. "We tried to build a championship contender team so fast, which I still think we are, we're just missing a few pieces."

Philadelphia's success next season will hinge heavily on where Harden is at physically with the offseason to work on his body and game, and how much of a difference a full year of chemistry building makes. The good news for the Sixers is that in spite of how new they were as a group, Harden managed to lift up their offense and make players better on that end starting with the very first game he played in a Sixers uniform. Harden's chemistry with Joel Embiid in the pick-and-roll, ability to create open threes for teammates, and occasional bursts of scoring gave them a shot in the arm on that end of the floor, where they showed the capability to simply outscore teams at their best.

Building on that formula is going to require further sacrifice from the entire group, Harden included. The well-paid star needs to break from some of his habits in order to be the best version he can be for this team. Finding comfort as a catch-and-shoot option off of Joel Embiid should be a major priority for Harden heading into next season, the Sixers needing him to be part of a group that capitalizes on the doubles Embiid commands in and around the paint. Defensive intensity was up and down for Harden during his first stint in Philadelphia, though the same could be said for the group as a whole, as the Sixers were severely short on two-way players as a group.

Nothing is more important than Harden simply reclaiming some of the burst and athleticism he appeared to be missing last season in the wake of hamstring problems that undercut the end of the 2020-21 season in Brooklyn. The optimist's view of Harden is that he has simply needed more time and offseason work in order to put his body back in the place it was prior to his Brooklyn tenure. There were times in Philadelphia where you saw glimpses of the Harden of old, primarily when the Sixers' schedule broke so that he had extra rest days. Rest or not, Harden's ability to consistently create separation will be monitored closely next season, and will tell us a lot (though not everything) about what they can expect out of him in the years to come.

(It should be noted, of course, that Harden's inability to get downhill to score or facilitate was often a product of teams attempting to wall him off and force other Sixers players to beat them. The evolution of Philadelphia's depth this offseason and beyond will play a part in how Harden looks, even if he does get back some juice with time to work.)

The puzzle pieces are starting to come together, but the full picture still isn't clear from where we sit today. Expect some early fireworks in free agency, and prepare for another year of The Beard.