What are the Sixers' financial options heading into free agency? 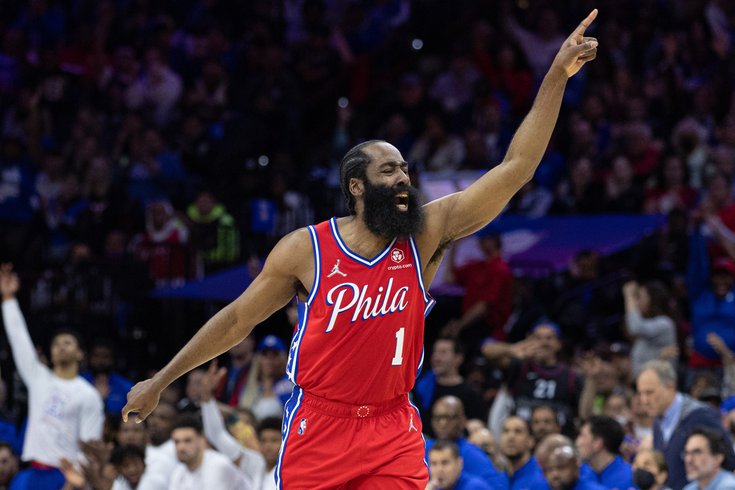 The Sixers have been prominently attached to some big names in the marketplace ahead of free agency, but perhaps it's not clear to you what options they have or how much space they have to work with. The good news is that there are people who work for NBA teams who are probably as confused as you are.

To make it a little easier on you ahead of the start of free agency, here's a quick guide to keep in mind.

Who is definitely on the books?

In order of how much money they are owed next season, these players are (barring trades) on Philadelphia's cap sheet next season at these numbers.

That adds up to a grand total of $104,322,905. The current projection for next season is a $155.7 million cap apron, a number whose importance we'll explain in a second. You might notice there's a prominent name missing from that sheet.

James Harden's decision on his option determines what the Sixers are able to do and when. The two paths in front of them are as follows (assuming he returns, and all reliable intel has suggested he's no threat to outright leave).

Path A: James Harden opts into his contract before the deadline (today, June 29) passes. Harden is then on the books for next season at the number for his player option, $47,366,760. This puts the Sixers at a total of $151,689,665 allocated to 13 players on their roster, roughly $4 million below the cap apron. Based on what we know up to this point, this is the likelier path, but it's the one that complicates what everyone thinks they want to do.

Path B: James Harden opts out of his contract before the same deadline, and signs a new contract with the Sixers at a to-be-determined cap figure. This is not inherently better or worse for the Sixers in the short or long-term, as it depends wholly on what sort of deal the two sides would come to an agreement on after this decision.

This path has the potential (but not guaranteed) benefit of providing the Sixers with short-term cap flexibility that would open up money/cap tools for them to use on other free agents. For example, if Harden were to sign a three-year deal at a rate of $40 million per year, that would dent his cap hit by $7,366,760 compared to what he would make by simply opting in. In that theoretical scenario, the Sixers would have a total team sheet of $144,322,905 for their roster of 13 players heading into free agency. That would provide them with enough room to sign a player to the full, non-taxpayer mid-level exception, though they would likely not have the space to sign anyone else in this scenario, save for the completion of a trade that lowers their salary elsewhere on the roster.

The tools at their disposal, and the limitations of each one

Here are the terms you have to know if you haven't memorized them by now.

Minimum contract: Exactly what it sounds like, the lowest number you can pay a player, though there are a number of variables here. While there is a salary scale for minimum contracts dependent on years of experience (scaling from zero to 10-plus years), any one-year, minimum contract for players in at least their third season is partially reimbursed by the league. A player on such a deal will count on the cap sheet for the equivalent of the veteran minimum for a second-year player (currently estimated at around $1.8 million).

I still don't get it, number man

Okay, so let's tie this all together using the paths described above. I'm going to use rough numbers, rather than the specific sheet you see up top, to avoid hurting both your brains and mine. And because these numbers are still estimates for the time being, anyway.

Path A (Harden opts-in, no trades): Without trading anyone, the Sixers have roughly $4 million separating them from the $155.7 million cap apron. If they were inclined to simply add to this group, the tools at their disposal are the taxpayer mid-level exception ($6.4 million) and minimum contracts ($1.8 million). The advantage to staying on this path is that it provides Philadelphia with the most flexibility for the rest of the season. They are still beholden to league rules on salary-matching for trades moving forward but are able to go over the cap apron to sign additional minimum contracts, execute midseason trades, etc.

Path B (Harden opts out, no trades): Again, while granting that this is theoretical, a new Harden contract starting at $40 million annually leaves them with a shade under $11.4 million in cap space. This would allow them to use the non-taxpayer mid-level exception on a player (or players plural) of their choosing, but the use of the full mid-level on a single player would leave them with roughly $1.08 million in cap room under a $155.7 million apron. The Sixers would be hard-capped for the rest of the 2022-23 season, meaning that in addition to salary-matching rules for future trades, any subsequent transactions (trades, signings) would need to keep the Sixers underneath that apron threshold.

Path C (bring on the trades): In either Harden scenario, it feels likely that the Sixers are going to rearrange more of the roster before the dust settles. Daryl Morey is not one to rest on his laurels, and there has been plenty of smoke about what they'd like to accomplish (read: reunite more of the 2018 Rockets).

Philadelphia's options on the trade market will significantly influence which exception(s) they use. There is a scenario where Harden opts-in and the Sixers are able to use the non-taxpayer mid-level exception but it would require the Sixers to shed roughly $6.3 million in salary just to clear that number, to say nothing of any space they would then need to add additional rostered players on minimum contracts. It's difficult for Philadelphia to create the room for the NTMLE, use it, and keep 15 players on the roster if they, for example, send two or three of their smaller salary players out in exchange for no incoming salary.

The exception to that rule is if Philadelphia finds a suitor for Tobias Harris that sends back multiple players who add up to a smaller total than Harris' $37.6 million. We know the Sixers have explored Harris' value in the marketplace (in addition to other players, e.g. Matisse Thybulle), and a scenario where they attempt to use the non-taxpayer mid-level after Harden opts in makes the most sense if Harris' contract has been split into multiple smaller contracts, creating cap room while adding depth (depth on paper, anyway).

What they ultimately do will be a tell of what they thought was most valuable from a season-long perspective. If Morey and co. believe they can get a guy who materially changes their contention chances next spring/summer, the NTMLE will be in play. If balancing the books to make that happen becomes too complicated, or if they simply don't think the upside is worth locking themselves in for the rest of the year, they'll shop in TMLE territory.

To put it lightly, this is by far the hardest scenario to project, because it depends on each individual part incoming and outgoing. We can cross this bridge when the Sixers get there.

My advice: Don't worry about the cap sheet and just hope your team gets good players.