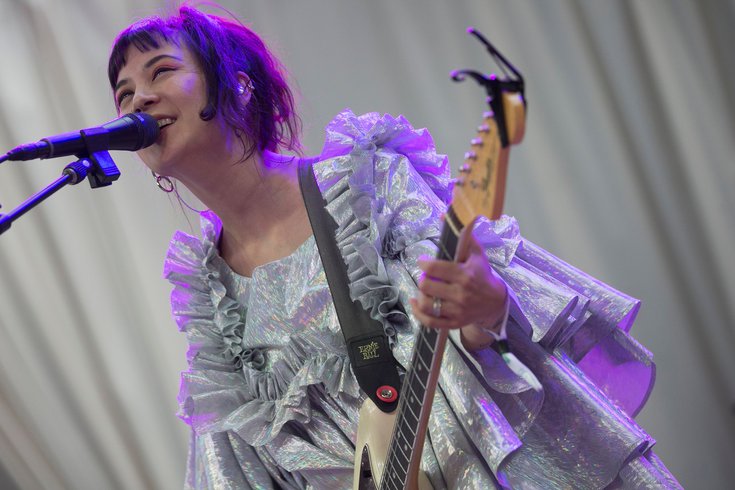 Japanese Breakfast, the experimental pop band spearheaded by Michelle Zauner, was featured on an episode of comedian Tim Heidecker's podcast, "Office Hours." She talked about her Grammy nomination for Best New Artist, her New York Times' best-selling memoir and its feature adaptation, and some upcoming performances.

Michelle Zauner — the woman behind experimental pop band Japanese Breakfast — is gearing up to have another busy year. Her 2021 memoir, "Crying in H Mart" landed on the New York Times Bestsellers List and has remained there for 25 weeks. Japanese Breakfast's third studio album, "Jubilee," garnered widespread critical and listener acclaim, including a Grammy Award nomination for Best New Artist and Best Alternative Music Album.

Zauner was also the latest guest to appear on Tim Heidecker's podcast, "Office Hours." The Allentown native and Temple University graduate sat down with Zauner to see what's next for Japanese Breakfast.

"I love your new record, by the way," Heidecker said. "How about you? Are you happy with it?" Though Zauner recorded "Jubilee" nearly two years ago, its June 2021 release was met with widespread good reviews, and the record was featured on several end-of-year lists for best albums of 2021.

And although Zauner hasn't "banked" any new music since then, she is currently working on the screenplay for the film adaptation of "Crying in H Mart," which will feature a Japanese Breakfast soundtrack. The book, which expanded on Zauner's 2018 essay in The New Yorker of the same name, is about her childhood, the beginnings of her career, and largely based on her grief and reaction to her mother's death from terminal cancer.

It will feature much of her life in Seoul, South Korea and Oregon, where she lived until attending Bryn Mawr College. Zauner lived in Philadelphia until the beginning of 2020, when she moved to New York.

Heidecker asked about Zauner's first Grammy nominations, in two categories. Though the Grammy Awards will be televised, they were postponed by The Recording Academy due to concerns about the COVID-19 pandemic.

"We were looking up all of the Best New Artists of every year and guessing who won that year, which was fun," said Zauner. "It's good to know if and when I lose the Grammy nomination that I'm in very good company." Other nominees in the Best New Artist category this year include Olivia Rodrigo, Saweetie, FINNEAS, Glass Animals, The Kid LAROI, and more.

"I feel like I've been ripping off Wilco my entire career," said Zauner, referencing a recent performance at Austin City Limits, where she helped salute the alternative rock band as they were inducted into the 7th Annual Hall of Fame.

Roseanne Cash, Jason Isbell, Margo Price, Sheila E., and Terry Allen were also featured in the performance of "California Stars," which is available below.

When asked about how her creativity and life has been changed by the unprecedented COVID-19 pandemic and the "dark times" we're in, Zauner expressed her confusion over what role art should play.

"I feel like this was the first couple of years, as such a purist for the arts, that I really questioned what our job was in all of this," Zauner said. "It felt very unimportant for the first time. But I try, in any kind of dark period of my life, to just focus on some kind of regimen. I got really into practicing the piano, which was something I didn't really do a whole lot [before], because it felt like if you show up everyday and practice this thing, you will get better. There's something really promising and comforting about that."

Japanese Breakfast will also take part in a Yoko Ono tribute album, "Ocean Child: Songs of Yoko Ono," which will be released on Feb. 18. Zauner will record "No One Sees Me Like You Do" for the album, with proceeds going to non-profit WhyHunger in honor of Ono. Other contributors include David Bryne, Death Cab for Cutie, and The Flaming Lips.

Zauner tells Heidecker that she's headed to Los Angeles from her home in New York to perform on "The Late Late Show with James Corden," after an original performance for Jan. 4 was rescheduled after both Zauner and Corden tested positive for COVID-19.

Fans of Japanese Breakfast can catch the rest of the interview below.