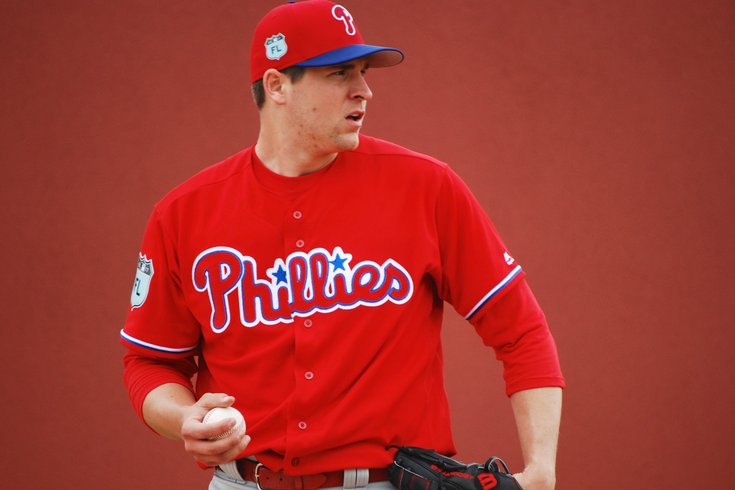 Jerad Eickhoff threw his penultimate start of the spring on Saturday in a minor league game in Clearwater. He will make his first regular season start a week from Wednesday in Cincinnati.

CLEARWATER, Fla. – It’s probably never a great idea to put too much stock in Spring Training stats for veterans, since a pitcher could be working on a pitch or throwing one in a count when they'd usually throw something else, and a hitter could be trying out a new batting stance or collecting hits off a non-roster pitcher you probably won’t ever hear from again.

Still, for the psyche alone, it’s never a bad thing to have success as the regular season nears. Jerad Eickhoff, coming off a breakout, first full season in the major leagues, is peaking as the exhibition season draws to a close.

After pitching brilliantly six days earlier against the Tampa Bay Rays, striking out nine while walking no one in six innings, Eickhoff stayed behind in Clearwater, Fla., when the Phillies hit the road for Fort Myers on Saturday. Eickhoff was once again in midseason form, taking a shutout into the seventh inning of a minor league spring game against the Toronto Blue Jays.

Eickhoff served up solo home runs to the first two hitters of the seventh inning but was otherwise both effective and efficient. The 26-year-old right-hander allowed two runs on seven hits in 6 2/3 innings, striking out five while once again walking zero in his penultimate start of the spring.

“I was executing a lot of pitches,” said Eickhoff, who pitched against Triple-A hitters on Saturday morning with many members of the Lehigh Valley IronPigs playing behind him. “(Catcher Ryan) Hanigan and I were on the same page. Really good work, and got a lot of work, so I was really happy with everything.”

Perhaps the most important number on Eickhoff’s pitching line was the number of pitches he threw: 97. With his first regular season start just 11 days away at Great American Ball Park in Cincinnati, Eickhoff has his arm stretched out and is ready for the rigors of the six-month regular season.

In the last six weeks, Eickhoff has made a point to focus on his changeup, a pitch that accounted for just 5.2 percent of the total pitches he threw in 2016. If he continues to utilize more in the regular season, Eickhoff will simply have another weapon in his improving arsenal.

“I threw some really good ones today,” he said. “This whole camp I’ve gotten some of the best reactions out of hitters that I’ve ever had off of it. So building off of that, it’s a step in the right direction.”

@ryanlawrence21 was right behind the plate today, his fastball had great movement and change up had dive, impressive outing

In his last three spring starts, including Saturday’s minor league game, Eickhoff has racked up 19 strikeouts while walking just one batter in 17 2/3 innings. He’ll pitch one more time this week in Clearwater (likely a scaled back start, perhaps four or five innings) before the Phillies break camp on Friday.

Eickhoff stayed behind in Clearwater on Saturday so the Phillies could find innings for Alec Asher and Adam Morgan, two roster hopefuls who were on tap to split the bulk of the work in Fort Myers against the Boston Red Sox.