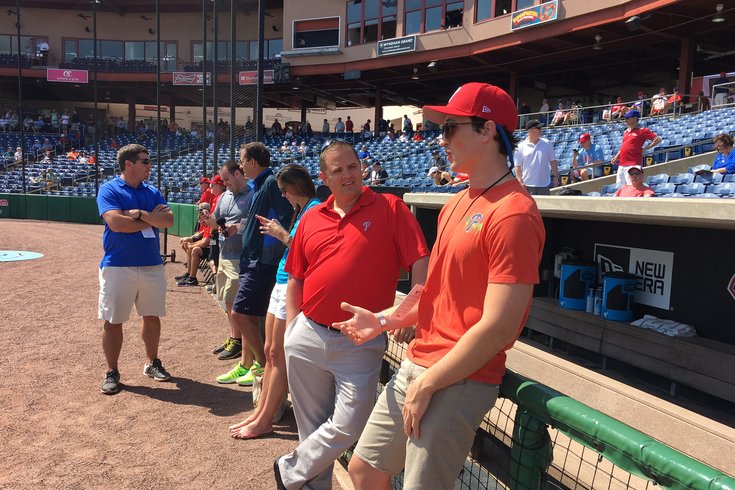 Miles Teller, who has starred in such films as "Bleed For This," "War Dogs," and the Oscar-nominated "Whiplash," will throw out the first pitch before the Phillies exhibition game on Thursday. He checked into Clearwater on Wednesday.

CLEARWATER, Fla. – A decade ago, before starring in Hollywood blockbusters and independent films bound for Oscar glory alike, Miles Teller was a Phillies fan living in New York City.

Teller, who just turned 30 last month, was in college at NYU during what was arguably the greatest era of Phillies baseball. Born in Downingtown, Teller was old enough to remember the wild, National League pennant-winning 1993 team but he couldn't miss his opportunity to get to the Phillies' first postseason game in 14 years when the Phillies played host to the Colorado Rockies in the NLDS in the fall of 2007.

MORE ON THE PHILLIES: Could Aaron Altherr's hot bat force Mackanin to get more creative with Phillies lineup? | Roster battles heating up as end of Phillies camp nears | Odubel Herrera returns to Phillies from WBC with goals in mind for 2017 season | From Japan to Clearwater, Moniak, Stobbe & Gowdy forge bond as premier Phillies prospects

"My dad got me tickets on StubHub," Teller said on Wednesday afternoon at Spectrum Field in Clearwater, Fla., where he'll throw out the ceremonial first pitch on Thursday. "Who was the pitcher who came in and gave up the grand slam?"

"I forgot about him," Teller said with a smile.

Teller had a near-photographic memory of the rest of the Phillies postseason runs from 2007-11. He missed out on the 2011 games at Citizens Bank Park (like everyone else, he expected the team to last a bit longer that October) but he was there a year earlier when Ryan Howard made the final out of the 2010 NLCS against the San Francisco Giants.

"I was at the game when (Shane) Victorino homered off C.C. (Sabathia)," he said. "And Brett Myers had two 10-pitch at-bats. It turned the game around."

It was a much easier commute from NYU to Philly than it is for him now on the other side of the country.

"I used to get the bus from Chinatown, New York to Chinatown, Philly," Teller said. "The Chinatown bus was like $15. Frickin’ nothing. But every once in a while the bus would catch on fire."

Teller took out some time from watching batting practice prior to Wednesday's Phillies-Yankees Grapefruit League game to take part in The Q&A.

Have the Phillies always been your No.1 team?

If you could play any Phillies person in history in a movie, who would it be?

Just because he was an inspiring guy, a team-leader type?

I just always love this hair and how tan he always was. And when he got called out on a third strike and laid his bat down and got into it with the ump, I don’t know, I just loved that. Dykstra would be fun to play, too. [laughs]. They’re actually making a movie about Dykstra I think.

What got you into acting, always your thing as a kid?

No, actually sports was my first passion. Sports and music, with all of us. I have two sisters and my mom had us started on the piano and then guitar, I started playing drums in some crappy rock bands in high school and stuff. I was always like a class clown. But I always wanted to go to Syracuse and do broadcast journalism. I really just wanted to be a sportscaster and be on Sportscenter.

I went to Northwestern thinking the same thing. Then got into the writing side.

Yeah, honestly it wouldn’t have been the right fit for me. Acting was something that came along for me. We had a young drama teacher in high school who was like 28. My buddy who I played baseball with, who I used to get a ride home with every day, he’d say, “I’m going to audition for this play and if you want to get a ride home maybe you should audition for it.” And I was like, “Yeah, sure.” It was actually Footloose and I played Willard. Which I ended up playing in a movie like eight years later.

Was that the movie with Julianne Hough?

What do you miss most about Philadelphia being on the West Coast now?

I just love the East Coast. The northeast is just such a great place for sports. You go to a bar and talking to a girl, she can rattle off two or three relief pitchers, let alone the position players. It’s just such a part of the culture. And I miss blue crabs. My dad used to always go to Dinardo’s and get a couple of jumbos. I miss Old Bay being on frickin’ everything. And then I grew up in Cape May, New Jersey for a long time. So I love the shore. Wawa.

There’s one right up the street from here.

I know it’s crazy. I remember the furthest one south, because we moved to Florida and we used to drive from Jersey to Florida, was in Virginia. Now they've got them in Tampa, Orlando.

So where did you go to high school, in Downingtown?

No, I actually went to high school about an hour and a half from here. Central Florida.

Family in Florida and Philly?

My dad, my bad’s brother, my uncle is down here now, and the rest of aunts and cousins and stuff are up in Malvern.

Did you say you played baseball in high school?

I did. I was a second baseman. When I was 12 dude, I was a stud. When I was 11 I was the only 11-year-old in Jersey hitting dingers. And then when I was 12, stud. But I didn’t hit a growth spurt again until in between junior and senior year of high school. But, yeah, second base. I had really good hands. Didn’t hit for pop but his for average.

Nervous to throw out the first pitch?

I mean… dude, I’m 30. You know, stuff starts cricking a little bit. But if I don’t hit his mitt, that’s pretty embarrassing. I might throw a split-fingered change.