For Jethro Tull’s Ian Anderson, disdain for the thespian life is no act

Classic-rocker coming to Musikfest talks why he’ll never be an actor, and the movie with Ted Danson that might have been 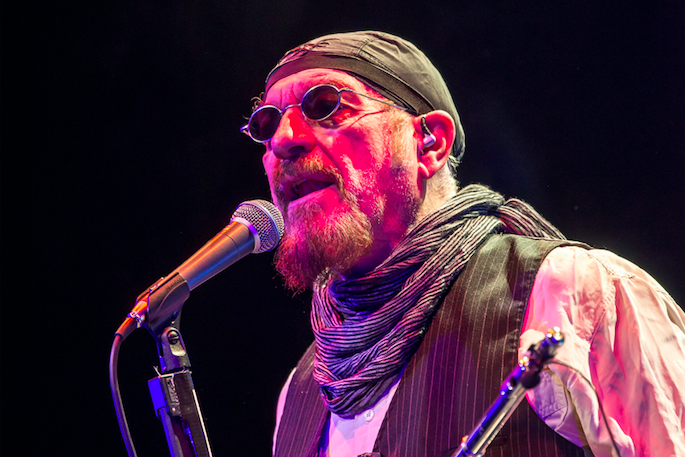 If you had the chance to travel back to the summer of 1964 and ask the male classic-rock-superstar-to-be of your choice who he wanted to be at that point in time, it’s a pretty safe bet most responses would include one or more of the following names: John Lennon. Paul McCartney. George Harrison. Ringo Starr.

But not the then-17-year-old Ian Anderson, who just a few years later would commence a storied career as the guiding light of the eclectic British rock band, Jethro Tull. Anderson, who turns 70 today, Aug. 10, was obviously watching his fantasies on an entirely different channel.

“I saw myself as James Bond. I saw myself as an actor who could play that kind of role,” recalled Anderson, who, on Sunday, kicks off the North American leg of his “Jethro Tull by Ian Anderson” tour on the final night of Bethlehem, Pa.’s annual Musikfest. The memory was conjured when, during a recent phone call, I asked Anderson why we’ve never seen him in an acting role, despite his half-century career as one of rock’s most theatrical performers.

“I realized, the horrible reality that to be an actor, you have to go to drama school, and then you have to take endless auditions and suffer rejection, and go out there and somehow have this amazing confidence,” he said.

“And then at the end of all of that, you’re going to spend hours and hours sitting in a trailer wearing makeup waiting for your call on-set—30 seconds or a couple of minutes’ worth of stuff--and you’ve spent the entire day doing very little. I don’t think I have the patience to do that.”

Anderson’s knowledge of the tedious reality of film and TV production is somewhat intimate: His son-in-law is “The Walking Dead” star, Andrew Lincoln, who plays Rick Grimes.

“He spends countless hours just sitting there waiting, going through his lines waiting for someone to say, ‘We’ll be ready for you in a minute, Mr. Lincoln.’”

As such, he continued, “The theater or TV or the movies just wouldn’t be fulfilling. And apart from everything else, I probably just wouldn’t have those skills, and it’s certainly way too late to start going off to the Royal Academy of Dramatic Arts.”

Not that he hasn’t been asked. Anderson identified two movie jobs that he has been offered: The role of a folk singer in a British film, and a part in a flick with Ted Danson(!).

“I was asked to play in a movie with [Danson] about the Loch Ness Monster,” he said. “They wanted me to play some crusty Scottish laird or something. I suggested maybe [Scottish comic] Billy Connolly should be their man.”

And then there was the time he was recruited to perform the Meat Loaf role in a stage production of “The Rocky Horror Picture Show.”

“I had to say, ‘Well, it’s very nice of you to ask me, but it’s just not my thing,” he said. “I couldn’t cope with the idea of turning up at the same theater night after night playing the same show to what would seem to be the same people. That’s just something that fills me with horror.

“I just want to do a gig, and leave town at the crack of dawn before anybody is awake. I just want to get out of town and move on to the next place.”

As you read this, “the next place” is Bethlehem. The show there, promised Anderson, will be a most fan-friendly program.

“It’s really very much the best of Jethro Tull—the kind of music we usually play at outdoor shows in the summer,” he explained. “It’s a little less esoteric than we might be playing if it were a nice comfy theater somewhere with more creature comforts and a more formal atmosphere.

“We keep it fairly much in the element of the ‘rock repertoire.’ We’ll be going deep into the songbook, but not necessarily with really obscure things that most people didn’t know.

“There are a lot of folks coming to see Jethro Tull for the first time. Every concert we do, there’s going to be some people who have never seen [a Tull] show before. So, you have to think of giving them some of the heavy hitters or they will be deprived.”