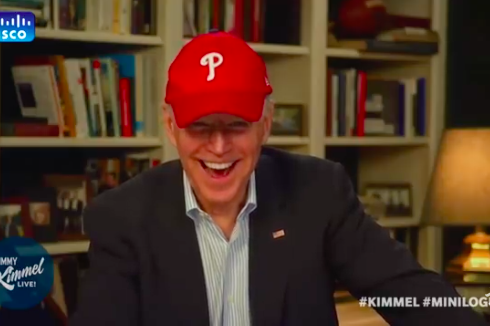 President-elect Joe Biden revealed in 2012 that his wife kept a Jimmy Rollins Philadelphia Phillies bobblehead on her nightstand.

Philadelphia Phillies great Jimmy Rollins has always had a great sense of humor and an infectious smile. It's one of the reasons he makes for a great bobblehead.

In all of the madness surrounding the outcome of the 2020 election, Rollins harkened back to a moment he shared with President-elect Joe Biden in 2012, when he was still Vice President Biden. The two were together at the White House for an event addressing violence against women in the United States.

At the start of the press conference, Biden revealed that his wife kept a bobblehead of Rollins on her nightstand, meaning he had to look at it every time he kissed her goodnight.

"He made it very clear that bobblehead JRoll was the only person he’d ever allow in the bedroom with his wife!" Rollins said on Instagram. "He had us all in tears."

Joe Biden had a Jimmy Rollins bobblehead in his bedroom. pic.twitter.com/vLHQFsXiCF

It's well-known that Dr. Jill Biden is a huge Phillies fan, which has gotten Biden in the team's corner over the years.

During an appearance on "Jimmy Kimmel Live!" earlier this year, Biden explained his love for the Phillies a little more bluntly.

When Kimmel conducted the interview in a New York Mets hat, Biden countered by putting on a Phillies hat.

"Well, I'll tell you what, it's the way to be able to sleep with my wife!" Biden said. "She's a Philly girl. If I wore something other than the Phillies, I'd be out of luck, man."