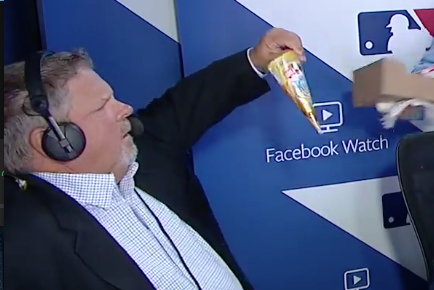 Former Phillies player and current Phillies broadcaster John Kruk was on hand to call the team's game against the Mets on Wednesday, a contest streamed on Facebook (which pretty much everyone hates so far).

Here is Krukky making the other announcers squirm while forcing some awkward laughter, a treatment usually reserved for Tom McCarthy.

I would make a Gape Kapler/coconut oil joke here, but I've been beaten to the punch. What I will say is that Kruk actually totally could have just come right out and said what he used to do during rain delays. The broadcast team pointed out that the FCC doesn't have jurisdiction over Facebook broadcasts.

MLB Network just jokingly pointed out that the FCC has no jurisdiction over Facebook streaming so an F-bomb could be dropped during the broadcast. pic.twitter.com/0qQ4GLg22m

Despite this, so far there have been no F-bombs or explicit descriptions of sexual acts.