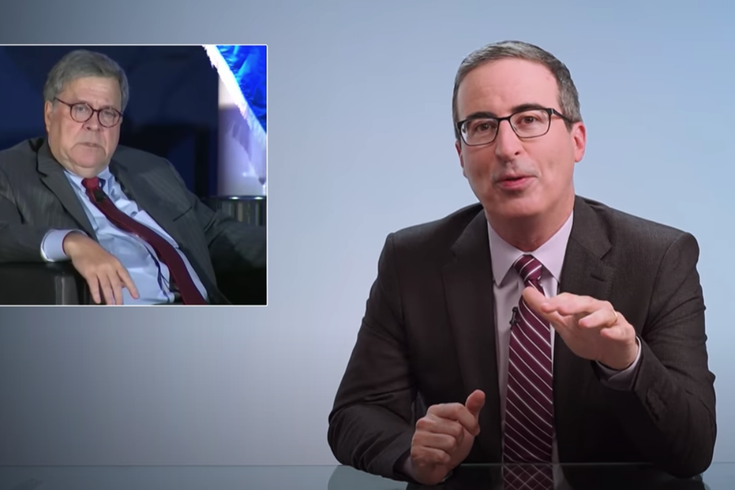 If President Donald Trump defeats Democratic presidential nominee Joe Biden in the election, late-night host John Oliver made the case that the most dangerous part of Trump's second term would be an emboldened U.S. Attorney General Bill Barr.

The "Last Week Tonight" comedian took aim at Barr during a segment of his HBO show on Sunday, slamming the attorney general for his law enforcement tactics and "relentless defense" of Trump.

Oliver dedicated his last episode before Election Day to making the case against the president's re-election – not a new stance for the host. He focused on two issues, Trump's handling of the COVID-19 pandemic and Barr.

Oliver took shots at Barr's comments about mail-in voting this election and his critique of public health measures during the ongoing COVID-19 pandemic. In September, Barr compared stay-at-home orders implemented at the onset of the public health crisis to slavery.

"I know that's ridiculous for, let's say, a hundred different reasons," Oliver says. "But do spare a thought there for his description of slavery as 'a different kind of restraint.' That phrase is doing a lot of heavy lifting. Much like slaves did when – and this is true – they were literal slaves."

Oliver outlined Barr's upbringing, education, and professional background to show how his past informs his current actions as attorney general. He highlighted the attorney general's time at Columbia University and an instance when he sided with law enforcement over protesters during anti-Vietnam War demonstrations; Barr's experience serving as former President George H.W. Bush's attorney general; and Barr's views on law and order.

The comedian also talked about unitary executive theory, a legal principle which Barr supports that interprets the Constitution as giving the president has complete and absolute power over the executive branch. Barr's support for this theory can be best seen on display in his criticism of former Special Counsel Robert Mueller's Russia investigation, as well as the former's defense of Trump in several legal cases, Oliver argues.

"Barr sees a country that needs to be whipped into shape and is doing everything he can to make sure that this president can whip freely," the host adds.

You can watch Oliver's entire segment on Barr here.

The perfect pairing of Trump and Barr should be explained to some of the president's supporters: Pro-Trump protesters were spotted outside Barr's home recently, calling on the attorney general to bring charges against Biden for unsubstantiated claims that the Democratic candidate had improper dealings in China and Russia related to his son Hunter.