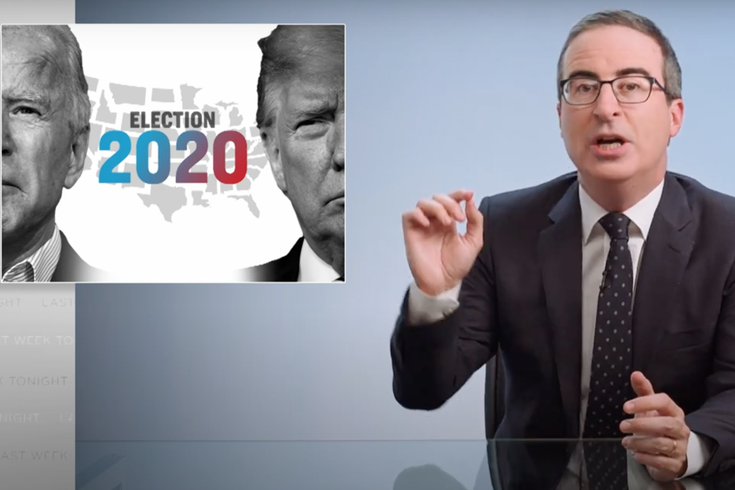 “Last Week Tonight” host John Oliver poked fun at the never-ending drama of the 2020 presidential election during his show Sunday night. Naturally, Philadelphia earned a significant spot in his monologue.

The city's election workers spent last week counting hundreds of thousands of mail-in ballots as the nation – and reporters – anxiously waited several battleground states, including Pennsylvania, to report their results. Philadelphia ultimately reported a batch of votes that clinched Pennsylvania, and the presidency, for Joe Biden.

Oliver first made fun of an interview between CNN anchor Don Lemon and Philadelphia City Commissioner Al Schmidt on Wednesday. His joke was aimed at the lack of patience from news outlets as results were not immediately ready.

During the interview, Lemon asked Schmidt if he knew when the vote-tallying process would conclude. Schmidt said he thought it was funny seeing the media telling everyone to wait for the results, given the unprecedented number of mail-in ballots submitted, only to become impatient once the polls were closed.

Nevertheless, Lemon still followed up to get a better sense of long how long the tabulation would take.

"He doesn’t f***ing know Lemon! Leave the man alone," Oliver said. "At that point, it would’ve been just as productive to ask him, ‘When will penguins learn how to fly?’ Or ‘when is Michael Keaton going to win an Oscar?’ Or ‘what does the rest of the Pringles guy’s body look like?’”

Oliver then turned his attention to former Trump lawyer Rudy Giuliani's efforts to stop the vote count in Philly. The comedian called Giuliani’s press conference in Philly last Wednesday "totally unhinged" for "throwing around wild accusations with absolutely no evidence."

"To come in and stand on a street corner in Philly saying 'We won Pennsylvania' is laugh out loud," Fetterman said in an interview with Fox News. "It’s bizarre. It’s like a bad 'House of Cards' episode."

The comedian also made light of the Trump campaign’s baseless accusations of voter fraud in Pennsylvania and other battleground states.

The campaign sued Pennsylvania last week to stop counting mail-in and provisional ballots and to provide poll watchers more access to the process. While a federal judge granted the campaign a small victory by allowing its monitors to move from 10 feet to 6 feet away, the vote-tallying process was not halted.

At one point, the judge asked the Trump campaign's lawyers whether they had observers inside the Pennsylvania Convention Center, where votes were being counted in Philadelphia. Trump had claimed his observers were denied access.

"There's a non-zero number of people in the room," the lawyer said.

Cracked Oliver, "The embarrassing flimsiness of these fraud claims starts to make sense when you see just how desperately the Trump camp was trying to drum them up."

Watch Oliver’s monologue on Trump’s efforts to delegitimize the election and the significance of Biden’s victory below.