John Oliver reminds us how close – yet far – the U.S. is from ratifying the Equal Rights Amendment

'Last Week Tonight' host noted 13 states have not ratified the ERA; only one more is needed to make it part of the U.S. Constitution 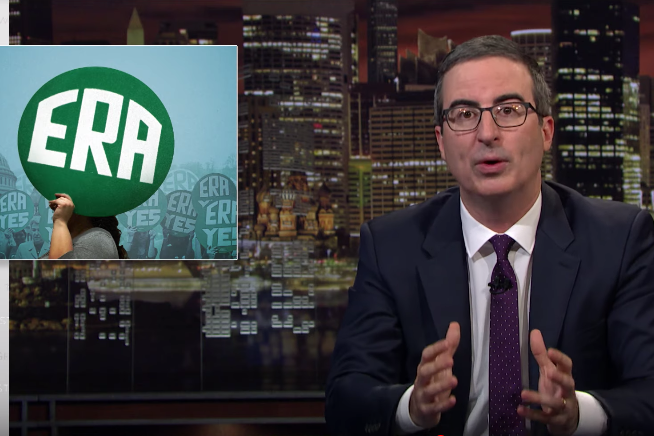 The host has this crazy, radical idea that the United States should finally ratify the Equal Rights Amendment, officially making it part of the Constitution – never mind that 80 percent of Americans think it already exists as law.

The idea behind the amendment dates back to 1923, and since the proposed ERA amendment passed in Congress in 1972, 37 states have ratified it. And, Oliver points out, the proposed 27th Amendment only needs one more state for ratification. The ERA received a lot of support but lost steam, thanks in part, Oliver said, to anti-ERA activist, Phyllis Schlafly, whom he described as a "pre-internet internet troll."

While Congress has passed gender equality laws, Oliver noted these laws can be overturned and a constitutional amendment, like the ERA, would be more stable. Oliver joked, "Constitutional amendments are safe from Donald Trump – unlike Melania's hopes and dreams and any American flag he gets close to."

Oliver speculated about which of the 13 states remaining could step up and be the last one needed to ratify the ERA. "Will it be Arizona? Or Georgia," he said. "Or could it be you, Oklahoma? You could be known for something other than tornadoes and musicals about how great morning is." He ended with Alabama, noting, "It definitely won't be you."