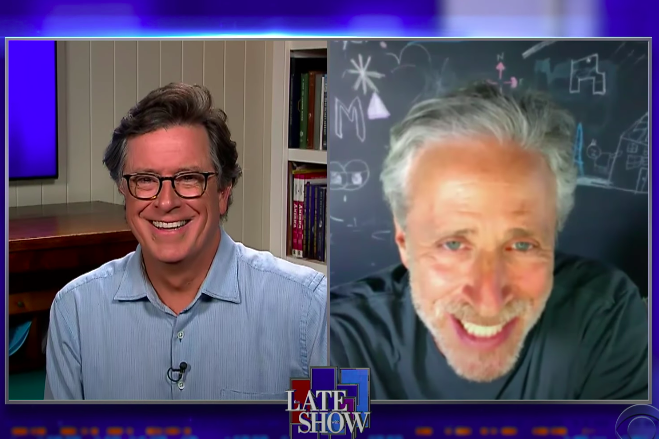 Jon Stewart joined Stephen Colbert on "The Late Show" Wednesday to promote his new film, "Irresistible." The comedian believes that Joe Biden may be the perfect candidate for president because of his experience with grief.

Jon Stewart may no longer host "The Daily Show," but the comedian still has a lot to say about politics — namely, presumptive Democratic presidential nominee Joe Biden.

Stewart joined Stephen Colbert on "The Late Show" on Wednesday to promote his new film, "Irresistible," and the conversation naturally dove deep into the upcoming presidential election. The comedian admitted he has come to love Biden even if the former vice president wasn't his first pick.

"Biden was not my guy. Wasn't even in my top four," Stewart said, adding he wasn't a fan of nominee's "Uncle Joe" character. “When I see Biden past the shtick, I see a guy who knows what loss is, who knows grief. And I think that kind of grief humbles you.”

Biden has experienced tragedy during his life. In 1972, the former Delaware senator's first wife and daughter were killed in a car crash. In 2015, Beau Biden, one of his two sons who had survived that, died of brain cancer.

"There’s a humility to the randomness of tragedy that brings about a caring that can’t be faked, can’t be contrived," Stewart said. "And what I think in this moment what this country needs is a leader of humility."

He added, "Maybe he is the man of the moment. Trump doesn't have that gear. He's still in the mindset that COVID was created to stop him from a second term."

On the pandemic, Stewart thinks the government could do better and he finds it worrisome that wearing a mask has become a partisan issue. "The mask is the new 'don't tread on me' thing. It's the symbol of tyranny," Stewart said.

"'I will not wear your COVID burka,'" Colbert said, jokingly.

"I just keep thinking – they wear those in operating rooms, right? They do that not because they're listening to NPR," Stewart said. " ... So the next time you get an operation, you just say to the doctor, 'You take that liberal bulls*** somewhere else. You come in here with no covering, you don't wash those hands, and you stick them in my open wound because I'm an American.'"

Watch the interview with Jon Stewart below.