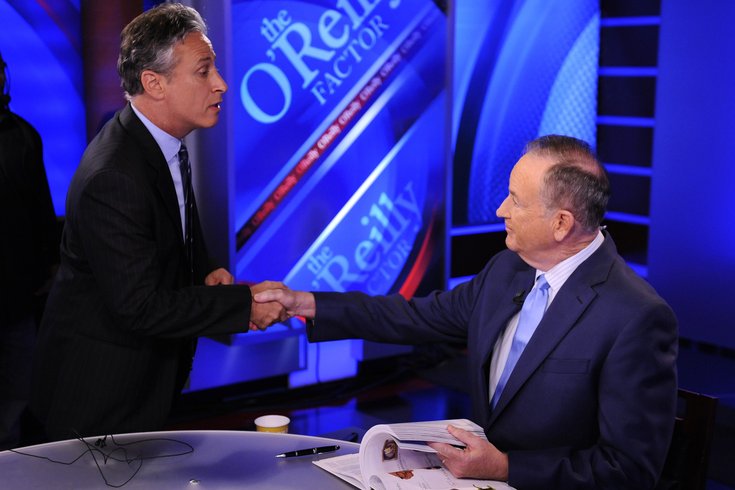 Jon Stewart before an appearance on 'The O'Reilly Factor' in 2010.

Read More
In wake of the news that Jon Stewart will be leaving Comedy Central's "The Daily Show" after 17 years as the show's host, many have not only been lamenting the eventual departure of everyone's favorite media watchdog but also reminiscing about his highlights and lowlights during his tenure.

Dan McQuade of PhillyMag put together a wonderful compilation of the times Stewart has addressed the city of Philadelphia during his comedy-news program, not including his infamous rant that skewered everything from cheesesteaks to the Phillie Phanatic.

But as loyal Stewart fans know, the comedian is known not only for exposing the hypocrisy and inconstancies in the news media on his own show, but also while appearing on the very programs he so often took shots at.

Here are some of the more memorable times Stewart took his razor sharp satire to the den of the bear he so often poked.

In an appearance that preceded the 2004 Presidential Election by only a month, Stewart came on to the debate show Crossfire to talk about his new book "America (The Book)." However little of the conversation discussed Stewart's publishing debut, as he took the opportunity to call the show "partisan hackery," claiming the show did not promote honest debate. He gets in to heated exchanges with the show's hosts Paul Begala and Tucker Carlson, and defends his own place in the spectrum of news, claiming his role is as a comedian.

CNN canceled Crossfire shortly after Stewart's appearance, and the network's president at the time Jonathan Klein admitted he agreed with the overall premise of the argument Stewart made on the show.

Shortly before Larry King's departure at CNN (and before Piers Morgan's unsuccessful attempt at replacing the longtime anchor), King had Stewart on as a guest. Stewart used King's departure as a springboard to criticize what he believed was CNN's wasteful use of all of its journalistic resources, as well as the network firing Rick Sanchez over comments he made about Stewart.

While many often characterize Stewart as left-leaning, he frequently has been  just as critical of not only Democrats but the news media that allegedly favors them. During an interview with Rachel Maddow, he is critical of MSNBC's use of the term "tea-baggers" in reference to the Tea Party.

Stewart's disdain for Fox News should be apparent to even casual viewers of "The Daily Show," as he goes after what he often alleges is a political propaganda machine disguised as a news organization. In an appearance on the network's Sunday news program, Stewart goes toe to toe with anchor Chris Wallace over not only Fox's journalistic integrity but also defends himself over Wallace's claims that he has a political agenda on his show.

Following his appearance, Stewart went after the network for selectively editing his interview as it appeared on other Fox shows.

Jon Stewart and Bill O'Reilly have a long history together, appearing on each other's shows multiple times. Their appearances are usually scheduled under the guise of what one of the two is promoting, but almost always becomes a debate on the prominent political issue of the day. In Stewart's most recent appearance on "The Factor," the two debate who's to blame for political log-jamming during the Obama Administration.

If you want to see Stewart and O'reilly go at it on neutral turf, check out their debate on the campus of George Washington University. And if you'd like some hopeful rumors, you can delve in to the developing conspiracy that Stewart is the heir apparent to Brian Williams.