Journeying through the Marie Kondo method, a first hand account 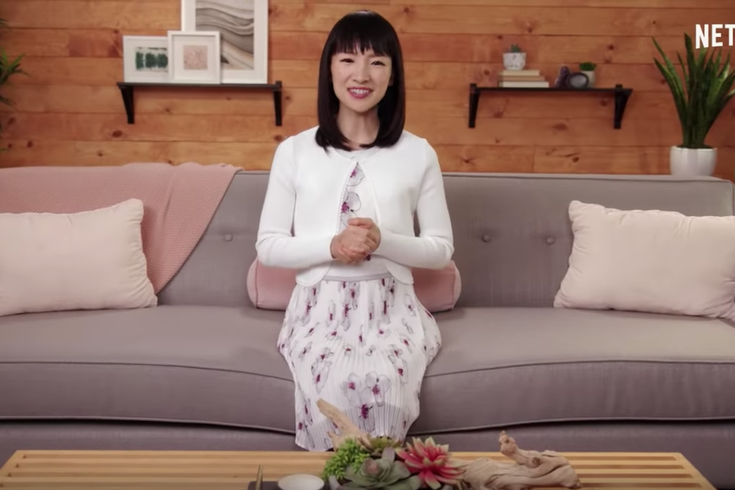 Marie Kondo's "Tidying Up" is available on Netflix.

Marie Kondo’s Netflix show, “Tidying Up,” has transformed the way people look at their stuff and has started a cultural revolution in ridding the world of things that don’t spark joy.

Kondo has a simple method that she uses to teach others to how to organize. It can be broken down in order by category. The method starts first with your clothes, then books, then papers, then komono (miscellaneous items), and finally sentimental items. As you begin, you take all of your clothes out of every drawer and closet and put them on a pile on your bed. Going through each item one by one, you ask yourself, "Does this spark joy?" If you find it does not, you 'thank' the item and donate it.

People are finding themselves struck by the usefulness in this idea, myself included. My bedroom for years has always been this ‘safe haven’ where I hoard a million little things and hold on to them for dear life.

But the odd thing that took me a while to realize was that by holding on to things I was creating a shelter that’s impossible to thrive in. I’ve always deemed my creativity as reasoning behind my clutter. ‘It’s ok. I need clutter to be creative.’ But it wasn’t helping, in fact, it was completely hindering my creativity.

There’s psychology behind this.  Dr. Joseph Ferrari found a categorical relation between clutter and indecision, noting how possessing too much stuff can interfere with a "positive quality of life." In another study he found a significant correlation between clutter and procrastination. The more likely someone is to procrastinate, the more likely they are to possess too much clutter. In the same study, clutter was shown to negatively impact a person's "identity."

I was already aware of the need I had to gut half the things in my room. I came home from Christmas vacation on the last day of the year with the motivation to re-do my room, but what heightened this newfound drive was Kondo's show.

While I initially watched it to find simple organizing hacks, what I found was something much deeper. Within a few minutes, I found myself getting emotional as Kondo kneeled on the ground to 'thank' the house and get to know the space. It wasn't just about being organized, it was about respect, and that thought surprised me. I've heard the notion before that you disrespect your space by leaving it in chaos, but I never truly understood what that meant until I saw Kondo on the floor greeting a stranger's house in that way.

As I began to sift through my items, I noticed something I wasn't expecting. When I would ask myself the question, “Does this spark joy,” as I held items of clothing that were collecting dust, I was surprised to realize that not only did it not ‘spark joy,’ but I sometimes didn’t even like it. So, why the hell was I holding on to it? I had never thought to stop, pause, and actually think about the things that filled the void that lived inside my room, which I was now beginning to see so clearly.

The revolutionary idea behind Kondo’s method isn’t necessarily the method itself (which is great), but how it stops us from looking at decluttering as that ‘thing’ that needs to be taken care of and reframes it to be about you (or you and your family) and what makes you happy. What was once a chore actually becomes self-care.

You can hear a million experts tell you why decluttering is so good for your health and how you can do it, but what Kondo has tapped into isn’t just the idea that decluttering is good for you, it’s that you deserve it. You deserve to have space, to feel energetic, and most importantly to have joy.

Even if we already know this subconsciously, her method makes it easier for us to see how we are in relation to our things and allows us to take back our power and not let the mess control us, so that we, in turn, may feel joy.

The show has received some criticism for highlighting a still very real problem in America that women feel the weight of organizing and keeping up with the household. There's a clear expectation in a number of the episodes that the weight of cleaning falls on the woman in the family with little help from the partner. Kondo received a lot of backlash from bibliophiles for noting that a person should only keep about 30 books, but the organizing guru later commented that it was taken out of context - if it sparks joy, she wants you to keep it.

Knowing myself I would have easily done the bare minimum if it had not been for Kondo's tips on how to choose what to keep and how to get rid of items. By learning to say 'thank you' to the things that once brought me joy, I was able to let go of things I didn't even know I needed to let go. While this approach to decluttering may be trendy, there's a voice of reason behind it that I hope sticks around - and surely with six garbage bags of 'stuff' to give away, I certainly see the light.

"Tidying Up with Marie Kondo" is currently available to stream on Netflix.