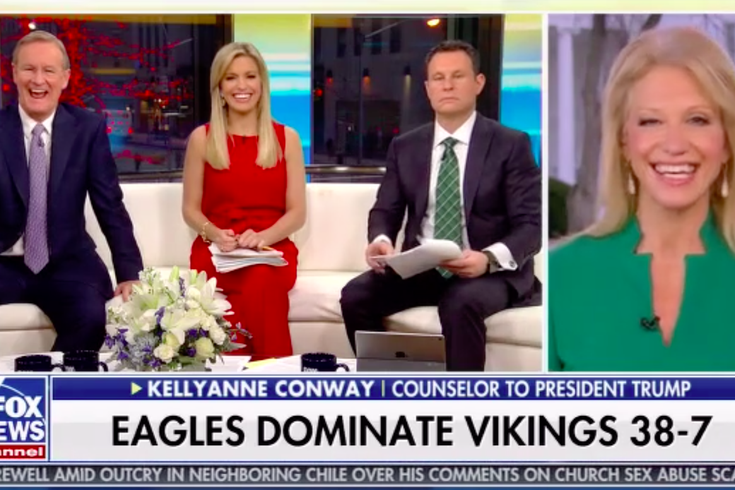 Kellyanne Conway, counselor to President Donald Trump, appears on "Fox & Friends" a day after the Philadelphia Eagles defeated the Minnesota Vikings 38-7 in the NFC Championship Game.

The fastest way to dampen the glory and sense of unity that Eagles fever is spreading across the Delaware Valley is to inject politics into the equation. Thank God for Kellyanne Conway.

"I used to go watch them at Veterans Stadium," Conway said. "We would also go to different events at Franklin Field, so they're oldies but goodies to me. We were season ticket holders for 15 years."

That's nice, nothing wrong with that. But then Conway found a way to work her criticism of the Patriots into an analogy for the 2016 presidential election.

"We were so happy to have the Patriots here last year when they won, but we want to have the Eagles here this coming year," Conway said. "And I'll just say that the underdog here is the Eagles and you know me, I love an underdog. The Patriots are like that woman whose name I don't mention on TV anymore. People always count out the Eagles, but I'm really happy for the team and I'll tell you why. I'm happy for Nick Foles. I'm happy for the team. It was a huge team effort, but also, they're constantly counted out, [it's] constantly said, 'you can't win.' It sounds familiar to me."

There you have it. In Super Bowl LII, the Patriots are Hillary Clinton and the Eagles are Donald Trump. Their pass-Russian ability says it all.

Here's the Eagles' logo in Donald Trump form. Don't blame me, I didn't do it. pic.twitter.com/DrT1NdZZ9l