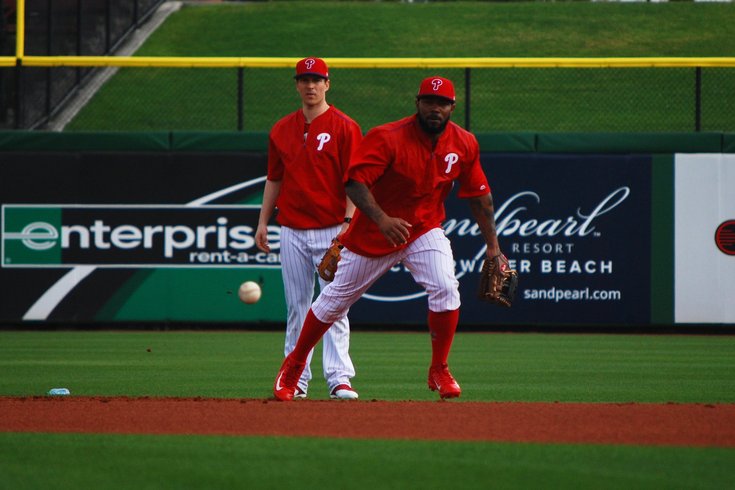 Howie Kendrick took reps in the infield during a voluntary workout on Tuesday, but expects to see regular action in left field in 2017 with the Phillies.

After shagging fly balls during the first day of official workouts in Clearwater, Fla., Howie Kendrick jogged in from left field. Although workouts were voluntary for position players (they technically don’t have to report to camp until Thursday), Kendrick’s morning wasn’t quite finished.

He made a beeline for his equipment bag, grabbed a new glove, and jogged out to second base, a position he played regularly for nearly nine straight years with the Los Angeles Angels and Dodgers before last season. After some work there, he moved over to third base and took reps there, too.

So is Kendrick, acquired by the Phillies from the Dodgers in early November to play left field, in line for more of a hybrid role in 2017? Probably not.

Kendrick said he took reps in the infield on Tuesday on his own – he wasn’t asked by anyone to keep his infield glove broken in.

“I just want to keep things fresh,” said the 33-year-old Kendrick, an All-Star second baseman with the Angels in 2011.

Kendrick is one of the many veterans on one-year contracts general manager Matt Klentak acquired this winter to improve the major league team (and in the case of Kendrick and Michael Saunders, the major league’s worst offense) while not blocking the path of the prospects waiting in the wings at Triple-A. Kendrick is in line to be the Phillies regular left fielder and he’s likely to hit somewhere in the first five spots of Pete Mackanin’s lineup.

A career .289 hitter (with a .749 OPS) in 11 major league seasons, Kendrick signed a two-year, $20 million deal with the Dodgers prior to last season. But the 2016 season wasn’t his favorite in the big leagues, as the presence of Chase Utley moved him out of his comfort spot at second base and into left field … which wasn’t a real problem until be began losing regular playing time there, too.

Kendrick was in the starting lineup for just three of the Dodgers’ 11 postseason games in October. He asked his agent to find him a better spot for 2017 (which basically meant requesting a trade).

In need of proven veterans to supplement their lineup, the Phillies sent Darin Ruf and Darnell Sweeney to L.A. in exchange for Kendrick.

“I don’t blame anyone,” Kendrick said of his situation with the Dodgers, who he first landed with via trade in December of 2014.

Kendrick just wanted to be with a team where he didn’t have to worry about whether or not he’d be in the lineup when he showed up to the ballpark every day. He’ll have that in Philadelphia, where he’ll be the regular left fielder – and at least ready and able to play in the infield if a situation arises.

“You never know,” Kendrick said. “Last year I didn’t expect to end up in left field.”

The first rule of spring training: always be prepared.