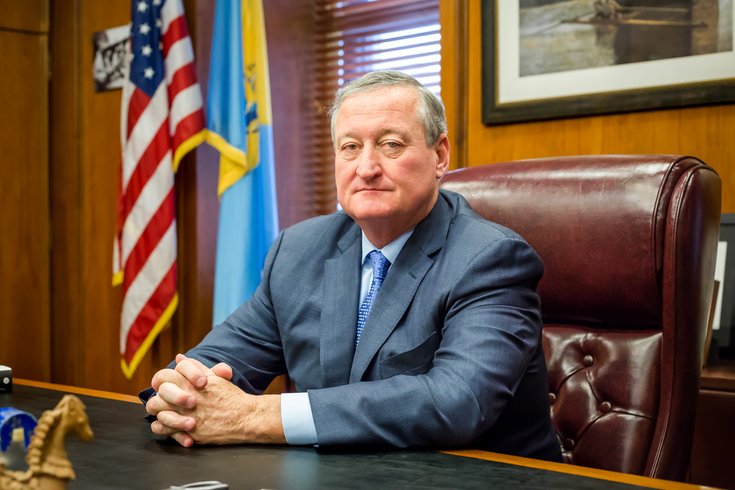 Philadelphia Mayor Jim Kenney poses for a photo in his office at City Hall on Jan. 12, 2017.

During a speech at City Hall Wednesday, Mayor Jim Kenney spoke out against the White House’s decision to remove the temporary protected status of Haitians in the U.S. in 2019.

The White House’s decision will force nearly 59,000 Haitian immigrants to either achieve legal status or leave the U.S. in the next 18 months, though their home country is still severely damaged by the 7.0-magnitude earthquake from more than seven years ago, as well as more damage from 2016’s Hurricane Matthew.

Kenney’s remarks come just shortly after a federal judge ruled in favor of the city retaining funding despite the president’s order against sanctuary cities.

During his speech, Kenney said he was “beside myself with sadness” because of Trump’s immigration policies, which he described as “simply un-American.”

“Our president is a bully,” Kenney said. “Our president is a punk, and he just doesn’t get it. I don’t know where he was raised, but his family didn’t do a good job raising that guy, I’ll tell you the truth.” NBC10 featured clips of his remarks.

Temporary protected status (TPS) grants temporary immigration for designated countries with citizens in need of refuge. Other countries currently with TPS include Syria, Sudan, South Sudan, Nicaragua, and Honduras, among others. Sudanese and Nicaraguans are slated to lose TPS in 2018.

“Could you imagine if they ended TPS for the Irish when we came here in the 1840s? Sent us all back to starve in our home country?” Kenney asked at City Hall.

“This country used to be a country of compassion and empathy and it is now a country of anger and divisiveness and Donald Trump is the reason why we’ve gotten where we are.”