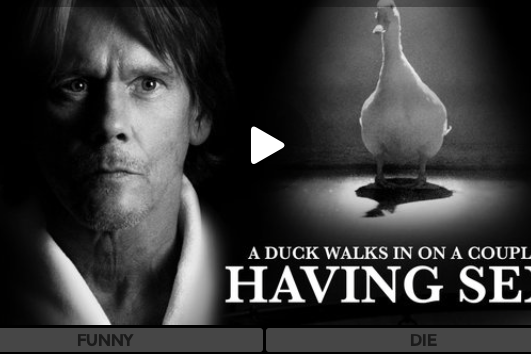 Kevin Bacon's "A Duck Walks in on a Couple Having Sex."

The late great American novelist Bernard Malamud once told the Paris Review that when 60 years old becomes your age, you look at the number with both eyes.

Kevin Bacon is staring down 60, but he's seemingly dead set on opening everyone else's eyes –  in amused horror.

The Philadelphia native and omnipresent actor recently released a "Funny or Die" short called, ahem, "A Duck Walks in on a Couple Having Sex."

We've sort of come to expect things like this from Bacon, who jumped off the deep end in our eyes with this freaky commercial he shot in spandex. His hit Amazon show "I Love Dick" also mines the weird world of sexual oddity and comedic lust.

With "A Duck Walks in on a Couple Having Sex," Bacon has truly outdone himself. The "Funny or Die" short functions as a "making of" in which we go behind the scenes of Bacon's directorial genius.

In the masterpiece below — probably NSFW, sans context — Bacon enlists the help of Justin Long, Lauren Cohan of "The Walking Dead" and wife Kyra Sedgwick. It is funny and you might die. (Note: the video contains sexually suggestive material).