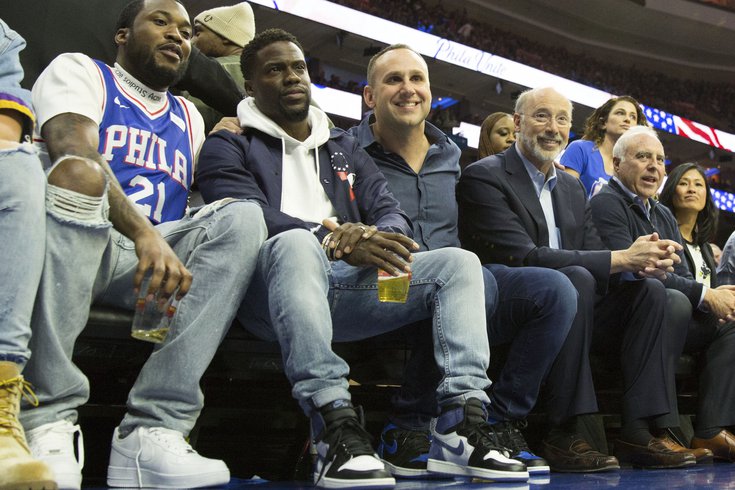 Meek Mill (from left to right) and actor Kevin Hart and Philadelphia 76ers limited partner Michael Rubin are pictured above with Pennsylvania Gov. Tom Wolf and Philadelphia Eagles owner Jeffrey Lurie during a Sixers game at the Wells Fargo Center. Meek Mill, Hart and Rubin are making a $15 million donation to support schools and disadvantaged students in the Philadelphia area.

The combined donation is the largest that any of the three men have made during their years of giving back to the Philadelphia communities where they grew up.

Details about the planned donation were limited on Wednesday afternoon, but the funds are expected to assist thousands of underserved Philadelphia families during the 2022-23 academic year. A spokesperson said the funds will go to private and parochial schools across the Philadelphia region to cover tuition costs enabling lower-income students to enroll. The donation does not benefit the School District of Philadelphia.

Meek Mill, who spent most of his upbringing in North Philadelphia, joined forces with Rubin in 2020 to create a $2 million scholarship fund to assist students during the coronavirus pandemic.

Hart, another North Philly native, donated $250,000 to the School District of Philadelphia in 2020 for technology upgrades and previously has given $50,000 scholarships to local high school students in need. In 2018, Hart provided $600,000 in college scholarship funds to eight Philadelphia students.

All three men have been involved in various other initiatives over the years, from gift giveaways to meal donations and events in partnership with the 76ers.

The donation comes a day after School District of Philadelphia Superintendent Dr. William Hite delivered sobering testimony about the funding challenges and achievement gaps at public schools in the city. Hite participated in a larger civil trial over allegations that Pennsylvania has failed to provide equitable and adequate school funding, a case that may have significant ramifications for the future of school funding in the state.

"Philadelphia is the poorest big city in the country," Hite said. "We have larger numbers of young people who don't have access to early childhood services and who aren't on grade level, those experiencing trauma, homelessness, are new to the country, have special needs, and those who need additional resources."

Hite, who plans to step down in August, has led the school district since 2012, a time when state aid for schools was slashed and Philadelphia lost about $250 million in funding. Hite has helped stabilize the district's finances during his tenure, but only by making sacrifices in staffing, extracurricular activities, repairs and the closure of 24 schools.

The school district has received $1 billion in federal COVID-19 relief funding, but Hite said annual expenses still outpace annual revenue. The district has an annual operating budget of about $3 billion.