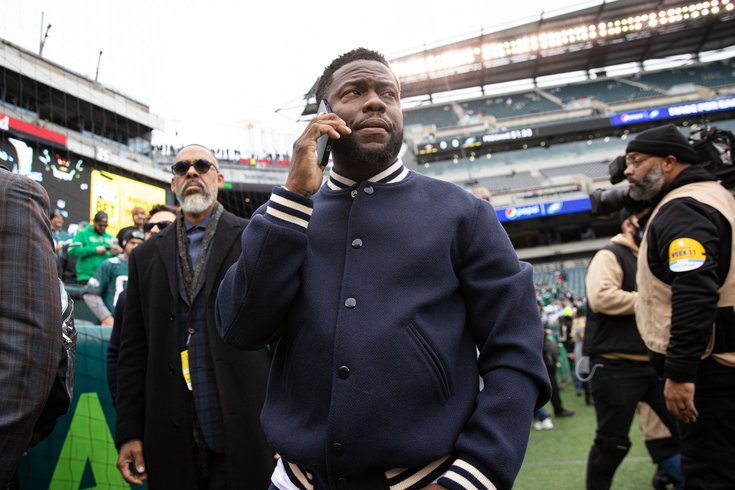 Kevin Hart appeared in the latest episode of ABC's "Shark Tank" where he evaluated business proposals by entrepreneurs and talked about his own success as founder of HartBeat Productions and Laugh Out Loud. Above is Hart photographed at Lincoln Financial Field in November 2021.

The newest episode of ABC's hit reality show "Shark Tank" aired on Friday, Jan. 7, with guest and comedian Kevin Hart on the panel of business leaders. The Philadelphia native is the CEO and founder of HartBeat, a production company that produces and invests in media content around the world, including Hart's major projects.

The episode begins with Hart's profile on the show, which includes details about his family and upbringing in Philadelphia, where he was primarily raised by his mother.

He goes into detail about the beginning of his comedy career, including his first performance at The Laff House in Port Richmond, and a 2007 performance at Montreal's "Just For Laughs" comedy festival that helped elevate him into the mainstream stand-up comedy space.

"I credit my mom for giving me the understanding of hard work and dedication," Hart said. "What you put into something is what you get out of it."

As part of his guest spot on "Shark Tank," Hart sparred with fellow panelist Kevin O'Leary, who remarked that Hart was a "rookie" in the shark tank. Hart responded by saying that the "beauty in business is knowledge."

Early in 2021, HartBeat scored an exclusive deal with Netflix to produce major film projects, including "Fatherhood" and "True Story," which star Hart and credit him as an executive producer.

"I started HartBeat Productions because I didn't want to be the star that was just work-for-hire," Hart said. "Starting a production company meant that I could actually be a part of the creative, and that's when the business-mind kind of kicked into overdrive."

Hart notes that he has 10 number one films, which have earned over $4.2 billion at the box office since the start of his career. He is also one of the highest paid comedians in the world.

"So many people feel like you have a cap of opportunity in life. I don't think of it that way," Hart said. "Life presents you with so many doors, you just got the choice to turn the knob and open them."

The Netflix deal was part of a larger set of expansions announced throughout 2021 as the company grows, including the establishing of HartBeat Ventures, a venture capitalist agency that seeks to invest in companies that showcase real strides in increasing financial inclusion.

Hart also owns Laugh Out Loud, a company he founded in 2017 that produces audio and video comedy content across multiple platforms, including a 24/7 streaming channel available through digital platforms like Tubi, Peacock, and Pluto.

"Where I come from, little kids that look like me are not expected to make it," Hart said. "My story does a lot more for those kids than people may think. To show that the dream is real... As HartBeat Ventures grows, you'll see a real initiative in closing that big financial gap between my culture and mainstream America."

The full episode is currently available to stream on Hulu or on ABC's website with a TV provider. Below is a clip from the episode in which Hart and Mark Cuban discuss a counter offer given by the owner of Black Sands, a book publisher that specializes in comics for and about the Black community.