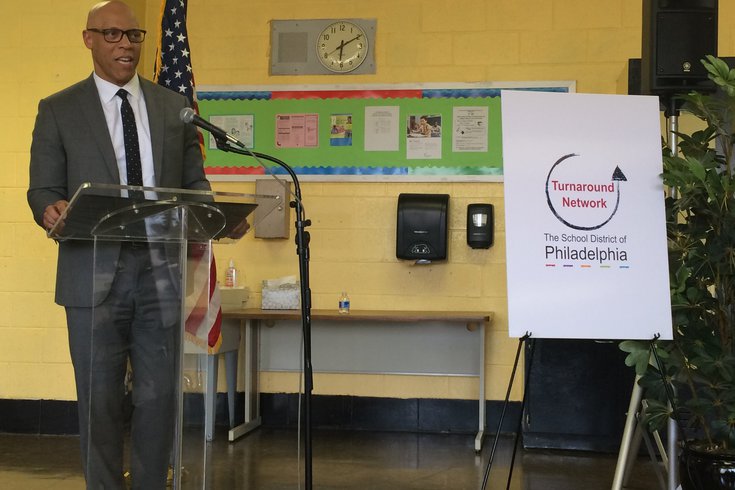 William Hite, shown above in 2016, says the opportunity to serve as the superintendent of the School District of Philadelphia has been 'a tremendous honor and privilege.'

William Hite will step down as the superintendent of the School District of Philadelphia when his contract runs out next August.

Hite, 60, who took the helm of the district in June 2012, called the opportunity "a tremendous honor and privilege" when he announced the news Monday night.

"As I continue to serve the students, families and staff of the School District of Philadelphia throughout this next year, I do so with deep pride and humility," Hite said. "We have come a long way since 2012 but there is still much more work to do. This school year will be a challenging one as we focus on keeping our schools safely open for in-person learning and helping all of our young people to heal and grow. I remain 100% committed to leading this important work in the year ahead."

The Board of Education said it will start a community input process and public search to identify a new superintendent by this spring. More information on the transition is expected from school district officials in the coming days.

"We are grateful that he will continue to lead the district this year, keeping school buildings safely open for our students and helping us as we begin the search process for his replacement," Wilkerson said.

Hite joined the School District of Philadelphia at a turbulent time.

Due to fiscal and academic issues, the district had been under state control since 2001. It was being overseen by a chief recovery officer who sought to close more than 60 city schools and divide the rest into cohorts that would be operated by nonprofit institutions or groups of educators, Chalkbeat reported.

The School Reform Commission, which had replaced the school board, favored privatization and the creation of charter schools.

But over the past decade, Hite has been credited with bringing some much-needed stability to the school district. Its finances improved to the point that the School Reform Commission disbanded and control was resumed by a local board. However, the school district has yet to eliminate its structural deficit, meaning that annual expenses are still exceeding annual revenue.

"[Hite's] leadership generated several years of steady academic progress and laid a strong foundation for the work ahead," Mayor Jim Kenney said. "In returning the district to local control, our goal has always been to ensure that every student, in every neighborhood school, can reach their full potential with the foundation of a quality K-12 education, and we have made meaningful progress toward that goal thanks to Dr. Hite."

During Hite's tenure, graduation rates have increased and the number of high-performing schools has doubled, according to the school district. The number of charter schools in the city has increased to the point where these institutions are now educating a third of the district's students.

This year was the first time in 30 years that the school district and the teachers union reached a contract agreement before the previous one expired.

But Hite's departure comes as the district continues to grapple with the impact of COVID-19 pandemic on education.

Students spent the last several months of the 2019-20 school year and almost the entire following academic year participating in all-remote learning. The district tried several times to reopen schools, but in-person learning did not resume until later in the year when some students returned in hybrid phases.

All students have resumed full-time, in-person instruction this year, but many hurdles still remain. Among those issues include the frequency at which students are tested for COVID-19, the vaccination rates of eligible students and staff, and a shortage in bus drivers, classroom aides, food workers and other essential employees.

Hite's tenure also has been marked by concerns regarding safety in school buildings. Several school buildings have been repeatedly forced to close due to asbestos issues that made classrooms unsafe for students and teachers.

By leaving after 10 years, Hite's pension with the Pennsylvania Public School Employees' Retirement System will vest. He currently receives a $334,644 annual salary.

A former teacher and principal, Hite previously served as superintendent of Prince George's County Public Schools in Maryland, just outside of Washington.