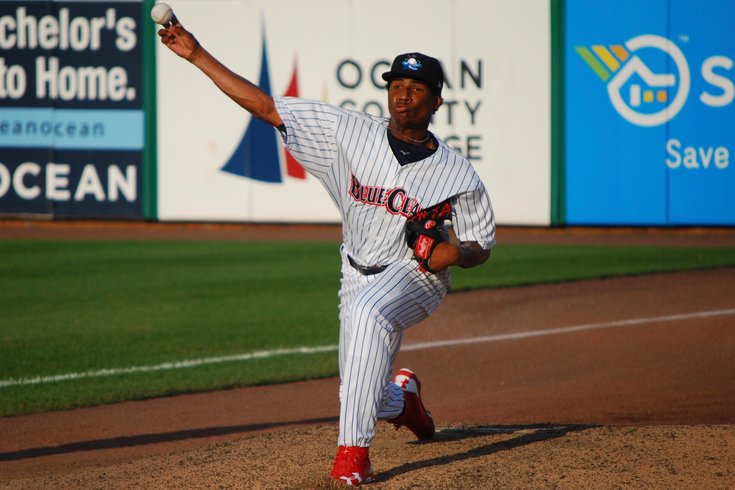 Sixto Sanchez, the Phillies top pitching prospect and the owner of a triple-digit fastball, has a 46-to-4 strikeout-to-walk ratio in nine starts at Low-A Lakewood.

LAKEWOOD, N.J. – It was a pristine night in Lakewood, N.J., one that couldn’t be ruined by anything with the No.1 overall pick in the 2016 draft in center field and one of minor league baseball’s most exciting young arms on the mound.

But about three hours before first pitch at FirstEnergy Park, Greg Giombarrese, the director of communications for the Lakewood BlueClaws, got a sheepish look on his face as he began to apologize. When he paused before delivering the news, you began to fear the worst.

Nope, Sixto was just fine. The problem, Giombarrese explained, was a glitch in the ballpark’s technology that wouldn’t allow the radar gun reading to be displayed on the outfield video board for all to see on Thursday night.

“But we’ll have a gun right outside (the pressbox),” he explained.

When Lakewood catcher Edgar Cabral’s mitt began to pop about 90 minutes later, with Sanchez warming up in the bullpen prior to first pitch, you understood the apology. The baseball arrived in the glove with such force, you almost needed to know, as you perched from just a few feet away, how fast was that??

The Greensboro Grasshoppers would find out soon enough. Too fast too often, and too overpowering for almost any hitter in the South Atlantic League.

But you don't have to keep your eyes on the radar gun or your feet in the batter’s box for long to understand what makes Sixto Sanchez special.

“Well, he throws 102 (miles-per-hour), so,” BlueClaws center fielder Mickey Moniak said with a laugh before the game. “So that’s a huge plus. But, yeah, he throws 102 and he can command it.”

And that’s the other thing special about Sanchez, who took the mound Thursday with his 19th birthday exactly one month away: he has uncanny command, too.

"It's surprising for a guy that throws that hard," Cabral said. "Usually guys that throw that hard don’t have much command that he has." 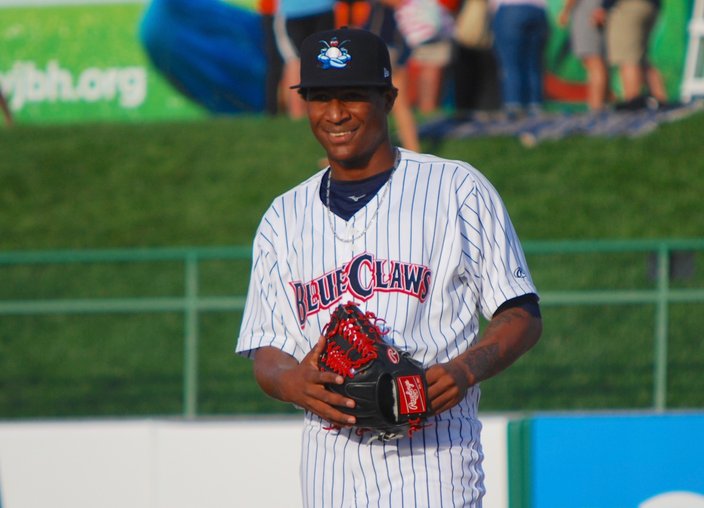 Sixto Sanchez has gone from relatively unknown Phils' prospect to teenage phenom in the span of the last 11 months.

Since turning heads last summer in the Gulf Coast League, his first taste of baseball outside of the Dominican Republic, Sanchez has complemented his triple-digit fastball with a stinginess for giving away free passes to hitters.

After striking out seven and walking one in five innings on Thursday, when Lakewood beat Greensboro 6-4, Sanchez ran his ridiculous strikeout-to-walk rate to 46-to-4 through his first nine starts of 2017. Through the first three months of the season, only six starters throughout the minor leagues have accumulated at least 45 strikeouts with five or fewer walks.

And only one has 45 or more strikeouts with fewer than five walks: fireballing Lakewood right-hander Sixto Sanchez.

“I just concentrate on first-pitch strikes, that’s important to me,” Sanchez, who at 6-foot, 185 pounds, is only slightly bigger than one of his idols, fellow Dominican Pedro Martinez, said through a translator Thursday night.

“When I get up in the count,” he continued, “then I can be aggressive.”

This is pretty much what happened in his second inning of work on Thursday night. Sanchez attacked the strike zone early and then, one by one, overpowered Grasshoppers hitters. He began the 1-2-3, three-strikeout frame by finishing off Greensboro designated hitter Dalton Wheat with a 99-MPH heater.

“It’s just God-given, I think,” Phillies player development director Joe Jordan said after watching that second inning from behind home plate at FirstEnergy Park. “His ability to follow the glove with that big of a fastball, it’s not normal. It’s a good start (to his career), with that fastball command. We have some work to do with developing the other ones, but it’s a pretty good start.”

The “work,” is in getting Sanchez’s secondary pitches, a changeup and a curveball, in line with his fastball. He had some success with them on Thursday, though, throwing enough of his off-speed pitches for strikes to keep hitters off-balanced.

One of his curveballs did clip the helmet of an opposing batter, but the batter had to be thinking, That’s completely OK, Sixto, I’ll take a 79-pitch off the edge of by bill and take first base over having to wear a 101-MPH fastball.

“His curveball, … he couldn’t quite snap it as good,” said Cabral. “Usually he’s better than he was today. If he has that command of his curveball and his fastball, you’re not going to hit him.”

Sanchez’s hit batsman was an anomaly, too: he has hit just four batters in 125 innings since beginning his pro career in the Dominican Summer League in 2015. Sanchez came into Thursday night with a filthy 0.925 WHIP in 30 games in the last three summers.

Sixto Sanchez threw 97-MPH FB on an 0-2 pitch to collect 7th K of night to end 5th. He has 46/4 K/BB ratio this season. Here he is pregame: pic.twitter.com/sfndSJWgoS

“Not only does he have a strong arm, but his I.Q. on the mound is well beyond his years,” said Lakewood pitching coach Brian Sweeney. “It doesn’t seem like he’s an 18-year-old about to turn 19. He knows what he wants to do he has a plan when he goes on the mound. He uses his fastball as his main weapon because he can. And then he goes to his secondaries when needed.”

Sanchez has plenty of time to hone a workable curveball and a changeup that currently sits between 86-91 MPH, a nice separation from his electric fastball. Even if he’s a fast mover through the Phillies system – which would fit right in since his patented pitch is fast and he works fast while out on the mound – Sanchez is at least two to three years away from the big leagues.

Just consider the growth he’s made in the last three years.

As a 16-year-old, Sanchez was trying to establish himself as a shortstop prospect in the Dominican Republic. He didn’t make the career-changing commitment to pitching until the fall of 2014, coincidentally the same time the Phillies made their own franchise-altering decision to begin their current rebuild.

Sanchez happened to come along on a tryout the Phillies had for another player in the Dominican, a catcher. But it was Sanchez who made an impression and he was signed for $35,000 – double what Hector Neris once signed for but a small figure compared to the original signing bonuses Freddy Galvis ($90,000) and Cesar Hernandez ($49,000) once received.

Most of the Phillies’ brass didn’t realize just how good of an investment that was until less than a year ago, when he kept piling up one dominant start after another in the Gulf Coast League, when he allowed three earned runs in 11 games and struck out 44 of the 194 batters he would face, while featuring a tantalizing fastball.

Sanchez was only 17 when he began dominating hitters in the Gulf Coast League last year. Now he’s unquestionably the best pitching prospect in the Phillies system and quite possibly the most talented prospect, period, in a flush farm.

“I mean we have a lot of good arms,” said Jordan, who sees talented pitchers blossoming regular in the Phils’ lower levels in A-ball, including among Sanchez’s teammates in Lakewood. “But to throw the ball where you want to as much as he does with his fastball, it’s a little different. … He’s (only 18). He’s got a big fastball and he can use it. He’s got a lot of work to do with his other two pitches. The more he throws, the better they’ll get. But they’re well behind the fastball. But it’s exciting. He’s a special kid.”

The Dominican kid with the great name (there has been only one ‘Sixto’ in MLB history) and the better arm showed off his best stuff late in his start on Thursday.

After serving up a two-out double, Sanchez was visited on the mound by Sweeney. A minute later he was back in the dugout.

Sanchez followed up an 89-MPH changeup with a rising 97-MPH fastball that left Greensboro cleanup hitter Colby Lusignan – six years Sixto’s senior – chasing with a weak swing. But you didn’t need a radar gun to know what Sanchez had done.

And he never looks at it, anyway, even when it is in working shape at Lakewood’s 17-year-old ballpark.

“I just look at the chart after the game,” Sanchez said. “I know how hard I throw.” 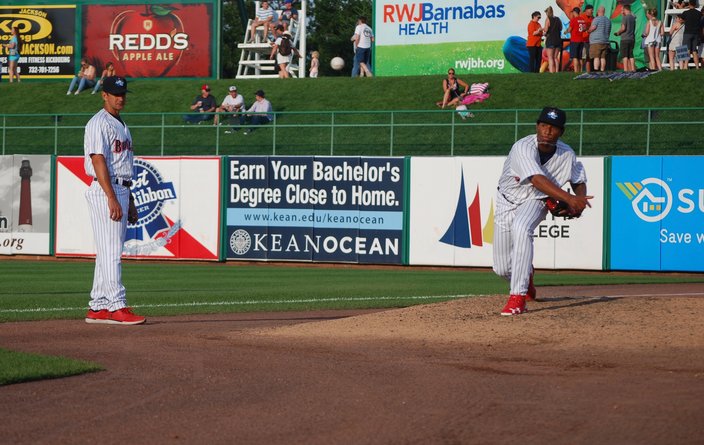 Sixto Sanchez warms up in the bullpen at FirstEnergy Park in Lakewood, N.J., under the watchful eye of BlueClaws pitching coach Brian Sweeney.