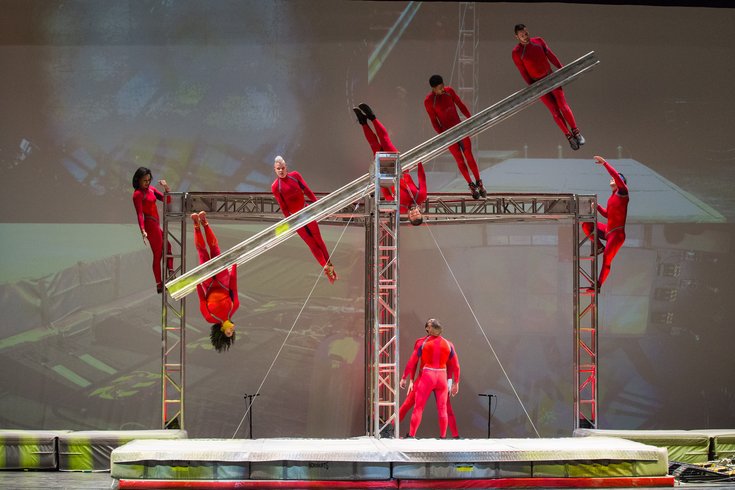 The laws of physics will be put to the test at "SEA (Singular Extreme Actions)," during PIFA 2018.

The Philadelphia International Festival of the Arts (PIFA) returns to Philly in 2018. The biennial festival begins Thursday, May 31.

We may have to wait a few months to experience the 50-plus performances from artists around the globe and the epic street fair on Broad Street, but we can start to get excited for what's to come.

The Kimmel Center has announced the PIFA 2018 lineup, although tickets aren't yet available. Sales start Tuesday, Jan. 30, at 10 a.m.

Some of the newly-announced performances included:

• The U.S. premiere of "Tape Riot," a hybrid performance art tour from Berlin-based performance art collective Asphalt Piloten (boasting an international team that includes a choreographer from Switzerland and composer from Italy)

• The highly anticipated return of French performance troupe Transe Express, with a new world-premiere work commissioned by the Kimmel Center to debut in Philadelphia: "Cristal Palace"

• "A 24-Decade History of Popular Music," an epic 24-hour performance art/concert with more than 24 musicians and 100 local artists, including burlesque performers, a choir, a marching band and knitters

• "SEA (Singular Extreme Actions)," a Philadelphia premiere event from the mind of MacArthur Genius Award-winner Elizabeth Streb, puts the laws of physics to the test through acrobatics and daredevil stunt work

Check out all the performances that have been announced here.

The street fair, a 6-block party that will transform the Avenue of the Arts, will take place on Saturday, June 9, the day before the festival ends.