In the month that has passed since NBA superstar Kobe Bryant died in a tragic helicopter crash, the global impact of the Lower Merion native's life has amplified the immense grief and pride felt across the Philadelphia area.

Sculptor Greg Marra, moved by the worldwide reach of Bryant's influence, has a vision for a statue that would etch his legacy as a local product in bronze.

"I sculpt excellence. I sculpt humanity," Marra, who is classically trained, and currently homeless, told PhillyVoice. "Kobe was all about excellence. He created this Mamba personality, this alter ego, to show that as a human being he could be excellent."

Marra is perhaps best-known for a statue he made of Chris Kyle, the decorated Navy SEAL sniper who was killed by a troubled veteran at a gun range in Texas. Kyle's military service and life were depicted by Bradley Cooper in the Academy Award-nominated film "American Sniper" in 2015, which was based on Kyle's autobiography.

In the weeks after Kyle's death in 2013, while Marra was living in Florida, the sculptor partnered with American Patriots in Art to build a 6-foot-3 likeness of Kyle that was bronzed in Texas and delivered as a gift to Kyle's grieving wife. 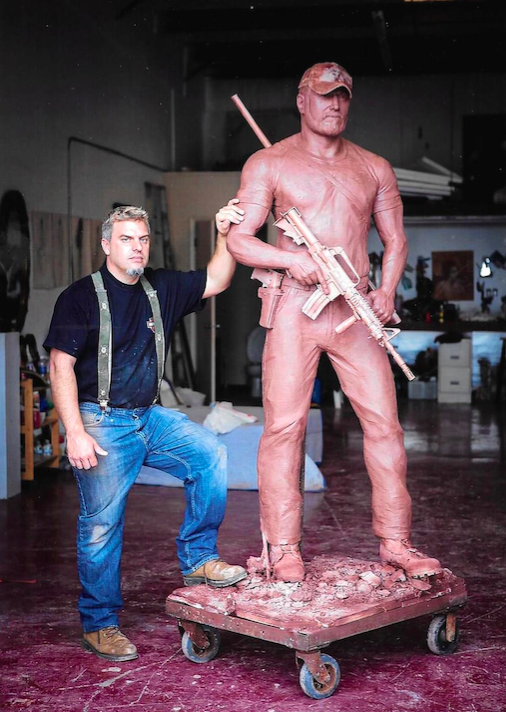 Sculptor Greg Marra is pictured with his statue of fallen Navy SEAL sniper Chris Kyle. The statue was later bronzed in Texas and delivered to Kyle's wife.

Other notable sculptures of Marra's, pictured below, include a tribute to Navy SEAL Adam Brown (in Hot Springs, Arkansas) and massive lion heads used in a presentation of Mozart’s “The Magic Flute” opera in Vienna, Austria. 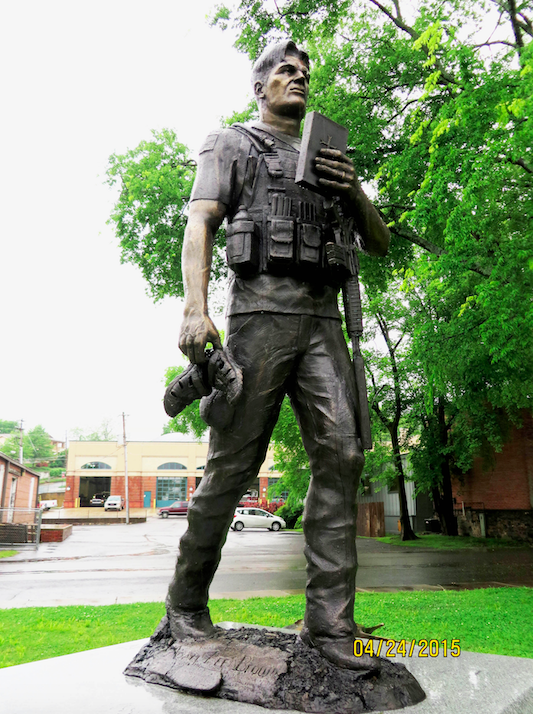 Marra built a statue of NAVY Seal Adam Brown for his hometown of Hot Springs, Arkansas. 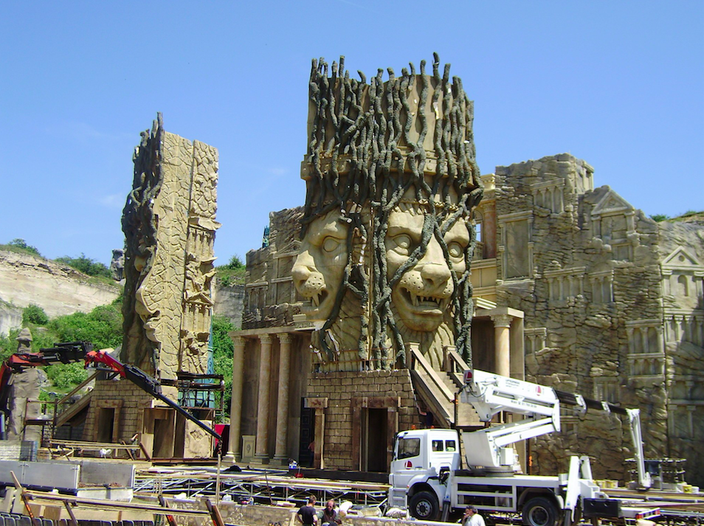 In Lower Merion, Marra envisions a statue of Bryant outstretched in a shooting motion, only there is no basketball in his hand. Trailing Bryant would be his 13-year-old daughter, Gianna, who was also killed in the Jan. 26 crash in Southern California. One of Gianna's hands would be in her father's grasp. The other would carry a basketball, symbolizing Kobe's role as an inspiration to younger generations.

The artist has been in contact with members of the Lower Merion Board of Commissioners, hoping to build support and secure a spot for his art in Bryant's hometown.

Two commissioners, Michael McKeon and Anthony Stevenson, have embraced the project and plan to take it up with the rest of the board and the community.

"It's a positive, unifying factor that inspires people to try to be the best they can," McKeon told PhillyVoice. "The township would have to find a location, get some funding approved and figure out a way to get things moving. But that kind of stuff really pays for itself, even though there's a cost. Kids see that. They grow up and they have more inspiration and they do bigger things with their lives. That's a win for the community."

The Lower Merion School District previously worked with Bryant on the school's gymnasium that bares his name. In this case, the township would theoretically take the lead on identifying a public park, recreation center or public basketball court for Marra's project. Several undisclosed locations in Ardmore, where Bryant spent considerable time growing up, have been mentioned as possibilities for the potential statue.

"You see someone who became an international icon who was playing on the same basketball court, or walking on the same sidewalk that you are, and I think it sends a positive message to the community," McKeon said. "So far, I haven't gotten any negative feedback from the community."

A project of this kind could be uncharted territory for Lower Merion, which currently doesn't have any statues on public property. Majority approval from the board is typically needed to move forward with township initiatives, but McKeon acknowledged a special process may also be required for a Bryant statue. That could begin with a formal resolution and approval of funding.

"We would try to find a location, make sure there's community approval, and it's important to us that the Bryant family is on board," McKeon said. "We've seen lots of statues get taken down around the country. We don't want to put a statue where people don't want it. It's a detailed process that involves different voices."

Whether the Lower Merion community would embrace a Bryant statue remains to be seen.

Since his death, the overwhelming focus has been on Bryant's positive contributions to the world. But there also has been some pushback against the hagiography of a man who was charged in a highly publicized sexual assault case in 2003. Bryant settled the matter with the victim out of court.

It's also unclear whether Bryant's family would want a statue of him in Lower Merion. Prior to his death, the Los Angeles Lakers already had signaled plans to erect a statue of Bryant outside the Staples Center as soon as 2021.

Bryant himself, in 2006, gave an interview to his hometown newspaper in Ardmore, where he suggested he was uncomfortable with the idea of a statue at Lower Merion High School.

"I'd feel like a dork … are you serious?" Bryant told Main Line Suburban Life at the time. "When I was in high school, it was about having fun, it was never about Kobe Bryant the basketball player, so when I come home that's the way it should be. That's very important for me, it means a lot to me."

Would Bryant's opinion on this subject have changed since then? Four years later, in 2010, Lower Merion High School dedicated the Kobe Bryant Gymnasium with his enthusiasm and participation.

After Bryant's retirement from the NBA, the expansion of his public profile as a film producer, writer and motivational figure seemed to suggest a shift in his attitude surrounding his legacy. It's possible to read the 2006 interview remarks as part humility and part longing, at the time, to preserve that area of his life untouched by his stardom.

Marra has acknowledged that the blessing of Bryant's family would be necessary for a statue to become a reality in Lower Merion.

Trained at the New York Academy of Figurative Art, Marra's commission-only work has earned him large sums of money in the past. The divorced father of three, now sober for three years, has found himself again relying on his talent as an artist to chart his next move. That's all he has, to hear him tell it.

"When you have a bad thought, you just say, 'Next,'" Marra said. "And you move on to the next great thing. It's almost like a magical word." 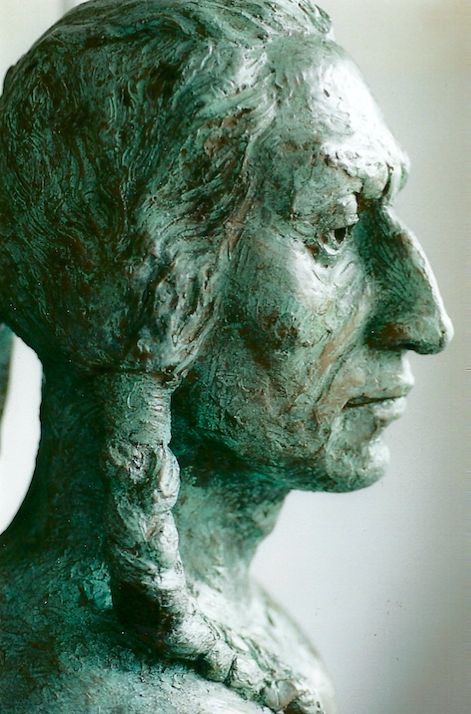 A Delaware native American chief held in a private collection in Doylestown. 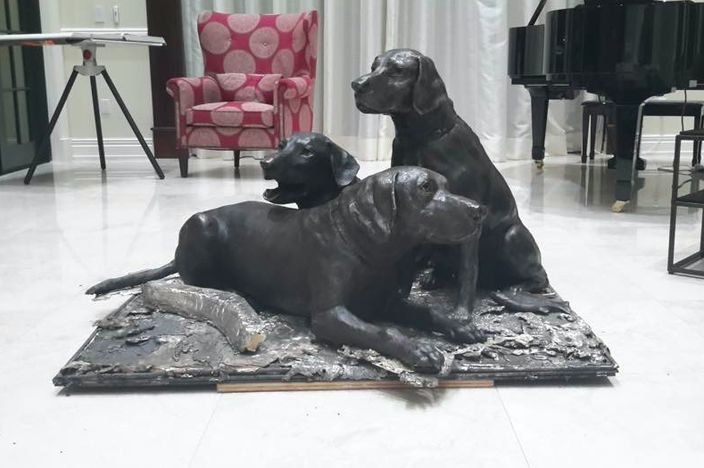 A sculpture of three dogs, later installed at a public park in Miami.

Marra's ambitious thinking could come across as far-fetched, but his confidence as a sculptor is backed by an impressive track record and glowing recommendations. In his quest for self-improvement, he's found a relentlessness to survive that's reminiscent of Bryant's tenacious approach to life.

"When you're totally in gratitude for any situation you're in, you can manifest whatever you want," said Marra, who previously lived in Sarasota, Florida. Now in Pennsylvania, where he lived for a period early in the last decade, he's looking for a permanent home and a studio.

At a newly created Facebook page, Marra has conceptualized his business as NEXTsculpt. Each commission he receives will help fund the next project to memorialize a significant person in a place of importance.

"What NEXTsculpt wants to do is to generate revenue to build more statues, to create an American renaissance."

For the Bryant project, Marra hopes to work with Lower Merion to find township funding sources and outside investors. Simultaneously, Marra plans turn to crowdfunding to help pool together an initial investment of $50,000, which would be used to purchase materials and secure a workspace for the Bryant project.

The full cost, if the artwork is commissioned, will partly depend on where it gets erected, Marra said. With full funding, he projects the entire sculpture would take between nine and 13 months to complete.