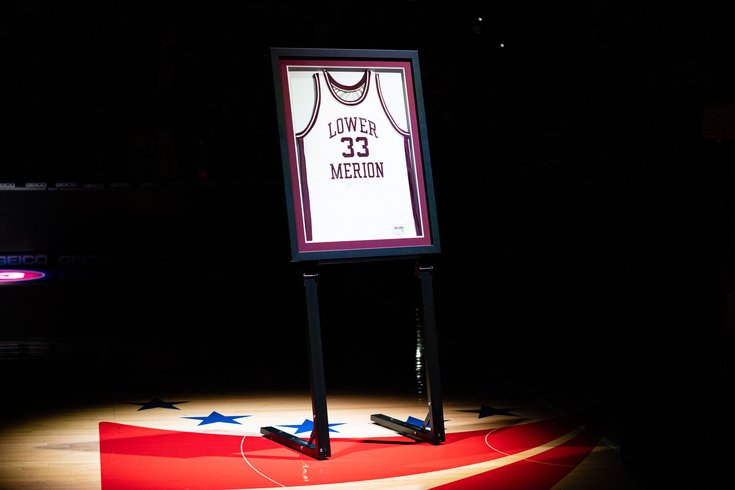 A replica of the jersey that Kobe Bryant wore for Lower Merion High School's basketball team was on display again during Saturday's memorial ceremony for the NBA star killed in a helicopter crash on Jan 26, 2020. The jersey was stolen three years ago from the school. Above is Bryant's Lower Merion jersey on display during the Sixers game on Tuesday, Jan 28, 2020.

Kobe Bryant’s iconic No. 33 high school jersey, which had been missing for three years, finally returned home to Lower Merion High School ahead of the school’s formal tribute to its late alumnus.

Bryant’s jersey and other memorabilia were stolen from a display case at Lower Merion High School in February 2017. The other missing items included the 1996 PIAA Boys Basketball State Championship trophy, a net from that championship game and five pairs of Bryant's signed Nike sneakers.

Lower Merion police began an investigation in to the theft and released surveillance photos of two suspects, but no arrests ever have been made.

Bryant's replica high school jersey eventually made its way to a merchandise collector and Bryant fan in China named Liu Zhe, who had purchased the jersey for $2,000 to add to his collection of Bryant memorabilia. Fearing that the jersey might have been stolen, the collector reached out to the school about returning the jersey about a year ago.

The process of returning Bryant’s high school jersey had been in the works before the 41-year-old was killed in a helicopter crash last week in Calabasas, California.

On Saturday, prior to the Lower Merion basketball team's first home game since Bryant's death, the school held a ceremony where the jersey was displayed and unveiled by Bryant’s cousin, his high school basketball coach Gregg Downer, and one of his former high school teammates, according to the Associated Press.

The school also held a 33-second moment of silence to honor Bryant.

“Good timing,” Downer said to the AP about the jersey’s arrival. “That was kind of an iconic moment when the spotlight went on that jersey. It was just tremendous. It was major irony, almost, how we’ve been waiting for that jersey for a long time. For a long time we didn’t know where it was. To have it back, it’s a fitting ending to a tough week.”

Bryant was a basketball star from 1992-1996 at the Main Line high school. The five-time NBA champion led Lower Merion to the Pennsylvania state championship in his senior year.

"Mr. Bryant's connection to Lower Merion High School, where he played basketball prior to joining the NBA, has raised the profile of the high school and our district throughout the world," school officials said in a statement last Sunday.

Students at Lower Merion have created a makeshift memorial outside the high school's gym, which is named for Bryant.

The Philadelphia 76ers paid tribute to Bryant this past Tuesday night, and they made sure to highlight Bryant’s connection to the City of Brotherly Love.