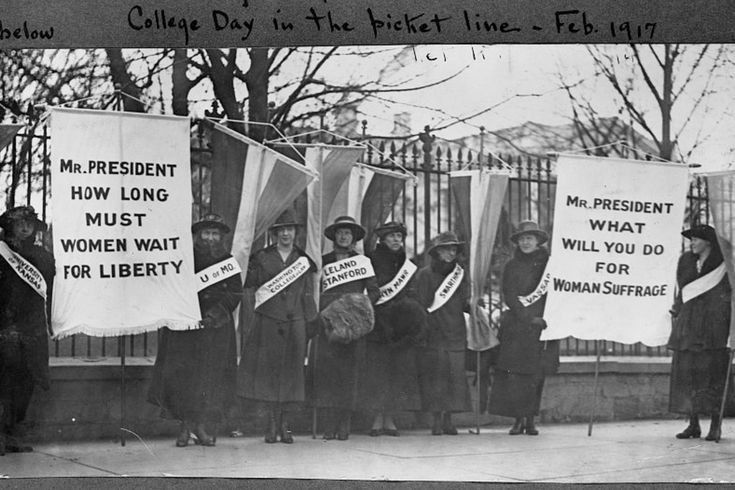 Philadelphia is temporarily changing its nickname to the 'City of Sisterly Love' for the 100th anniversary of the 19th amendment. Women in the U.S. were granted the right to vote on Aug. 18, 1920. Above, women with the National Woman's Party picket outside the White House to get President Woodrow Wilson's attention in February1917.

In honor of the 100th anniversary of the 19th amendment, Philadelphia's nickname is being updated pay respect to its "sisters" who championed the right for women to vote.

Philadelphia City Council adopted a resolution on Thursday that changes the city's moniker from the "City of Brotherly Love" to the "City of Sisterly Love." The new nickname will be use until the end of 2020.

The resolution was introduced by freshman Councilwoman Katherine Gilmore-Richardson in a joint effort with Visit Philadelphia. The city's tourism site plans to celebrate the women's right to vote anniversary throughout the year.

For an amendment to be added to the Constitution, it needs to be ratified by three-fourths of the states. On Aug. 18, 1920 Tennessee became the 36th and final state needed when one Republican legislator, Harry T. Burn, voted for the amendment, breaking a tie in the state House.

Prior to ratification, Pennsylvania women played parts in the women's suffrage movement. Angelina and Sarah Grimke were among the earliest public supporters of women's voting rights in 1838 – 10 years prior to the Seneca Falls Convention that would launch the campaign nationally.

Pennsylvania women never stopped fighting for their rights to vote despite the roadblocks suffragettes hit along the way. After Carrie Burnham, the first woman lawyer in Philadelphia, was denied the right to vote in 1871, she took her case to the Pennsylvania Supreme Court. She eventually lost and the state constitution was then amended to specifically exclude women.

Just a few years before the amendment was approved in Congress, a women's voting referendum passed the state legislature in 1913 but it did not receive enough statewide support in the 1915 election.