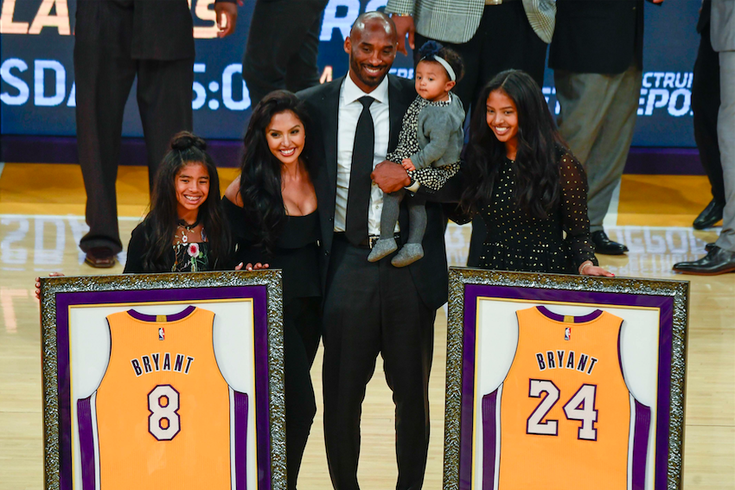 Vanessa Bryant, wife of Lower Merion-native Kobe Bryant, is suing the helicopter company operating the deadly Jan. 2, 2020, flight that killed the NBA great, the couple's daughter, Gianna, and seven others in Southern California.

While thousands gathered for a memorial in Los Angeles  for Kobe Bryant and daughter Gianna on Monday, attorneys for Vanessa Bryant filed a wrongful death lawsuit against the helicopter company that operated the aircraft in last month's deadly crash in California.

The 27-count complaint was filed in Los Angeles County Superior Court against Island Express Helicopters and Island Express Holding Corp. The suit claims that pilot Ara Zobayan, who was among the nine people killed in the crash, was "negligent" and "failed to use ordinary care in piloting the subject aircraft," according to the Los Angeles Times.

The Jan. 26 crash in Calabasas sent shockwaves around the world when news broke that Bryant, who grew up in Lower Merion, and 13-year-old Gianna, were among the victims of the early morning crash. Foggy conditions that day had prompted the Los Angeles Police Department to ground its helicopter fleet, but the private aircraft carrying Bryant departed as scheduled.

In the lawsuit, Bryant's attorneys contend Island Express flew the helicopter despite visual flight rules that require flights to be aborted if weather conditions do not meet those criteria. The suit also claims the pilot was flying 180 mph in a steep decline in the moments leading up to the crash, TMZ reported.

Zabayan reportedly was disciplined in 2015 for violating the visual flight rule minimums.

Damages sought in the lawsuit were not specified, but the complaint seeks damages for "pre-impact" terror for emotional trauma prior to the crash. It also seeks punitive damages, damages for the loss to the family, and damages for burial and funeral expenses.