Biden, Sanders and other Dems vie for labor support in Philly 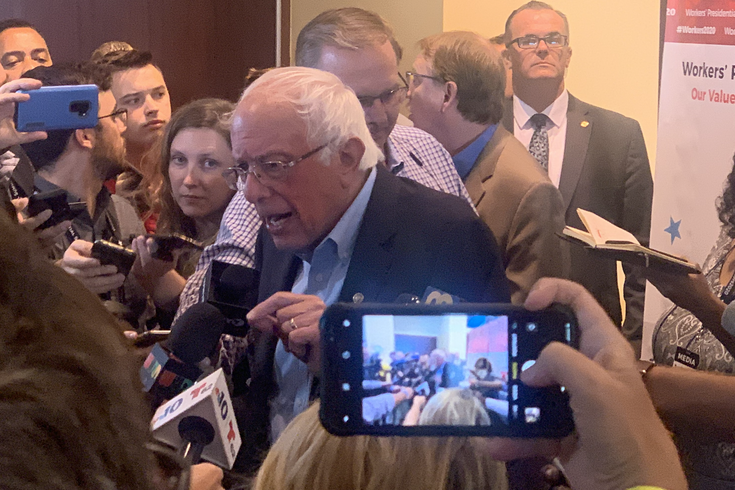 Bernie Sanders in a press scrum at the AFL-CIO Workers' Presidential Summit.

Pennsylvania played a major role in Donald Trump's victory in 2016, and the state figures again to play a prominent role in the outcome of the 2020 presidential election.

But first, Democrats have to pick a presidential candidate, with the state's primary set for April 28.

The Philadelphia Council AFL-CIO and the Philadelphia Building Trades Union on Tuesday held its first-ever Workers' Presidential Summit. Seven of the Democratic presidential candidates addressed union rank-and-file at the Pennsylvania Convention Center in Center City to put forward their plans to defeat Trump and lay out their vision for American labor and workers rights.

The AFL-CIO said it had invited all of the active Democratic candidates, and seven took them up on it: Vice President Joseph Biden, Sen. Bernie Sanders of Vermont, Mayor Bill de Blasio of New York, entrepreneur Andrew Yang, philanthropist Tom Steyer and Sen. Amy Klobuchar of Minnesota. The candidates all vowed to increase the power of labor unions and workers, with most vowing to take on union busting by corporations and to use government for pro-labor ends.

But they differed, often considerably, on how to get it done. They had notably different ideas on health care, with Sanders arguing for Medicare For All, while Biden, Klobuchar and others expressed support for a public option. Biden, in particular, argued that he didn't want to jeopardize health care that has been successfully bargained for by unions.

Retired 6ABC newsman Vernon Odom was the moderator, asking mostly the same questions to the candidates, who also took some questions from the audience and gave opening and closing statements.

Biden, widely considered the frontrunner in the Democratic race, appeared first. He touted his credentials of standing with unions throughout his political career, even in his home state of Delaware, which he said hasn't always been so pro-union.

"Wall Street didn't build America. Ordinary middle-class Americans built America. Labor built the middle class in America, that's why it exists," the former vice president said. He went on to praise labor as "the only folks that keep the barbarians on the other side of the gate."

Union members at #Workers2020 are asking questions about our unions and hearing from candidates on what they plan to do for workers. @PhillyAFLCIO pic.twitter.com/x2A6xnk19Q

Like several other candidates, Biden vowed to rescind the president's tax cut for the top tenth of the one percent, and vowed to appoint "pro-labor people" on the National Labor Relations Board. He also said he would fine companies that violate labor law – and make the CEOs pay fines for such violations.

"All I ask you to do is look me over. If you think that what I've said to you is accurate, if I've kept my commitment to you … without a strong union movement, this country will atrophy," Biden said.

The vice president's proposals were met with subdued praise and apartial standing ovation.

Next up was business entrepreneur Andrew Yang, whose main proposal is to give every American adult $1,000 a month in order to, he said, "give Americans a dividend from shared technological progress." He said he was modeling the plan after the Alaska Permanent Fund, which redistributes money from Alaska's oil revenues to its residents.

Yang spoke of his efforts to help unionize MMA fighters, and his opposition to right-to-work laws. And like several candidates on stage, he mentioned that Amazon paid no federal income taxes last year.

The candidate did acknowledge that many are going to be skeptical of his signature universal basic income proposal.

"Many of you think that this is impossible, that the Asian man is talking magic," he said.

One such skeptic of Yang's UBI plan was the next candidate on stage, Mayor Bill de Blasio of New York City.

"I think working people want work – they don't want a check sent to their home," the mayor said, while stating of Yang, "good man, wrong solution."

De Blasio listed his main labor agenda as a "worker's bill of rights," opposition to Trump's re-negotiation of NAFTA, and automation. He proposed levying a "robot tax" on companies that replace human jobs with automation.

Following the mayor was the candidate who clearly had the most support in the room, Sen. Bernie Sanders of Vermont.

The senator entered the room to "Bernie" chants as the audience cheered more loudly than for any other candidates.

The senator touted his 100 percent voting record with the AFL-CIO, who has "been on picket lines more times than I can remember." He proposed, as he has before, a tax on Wall Street speculation, a $15 minimum wage, tuition-free public schools and cancellation of all student debt.

Then, the senator launched an attack on Trump. 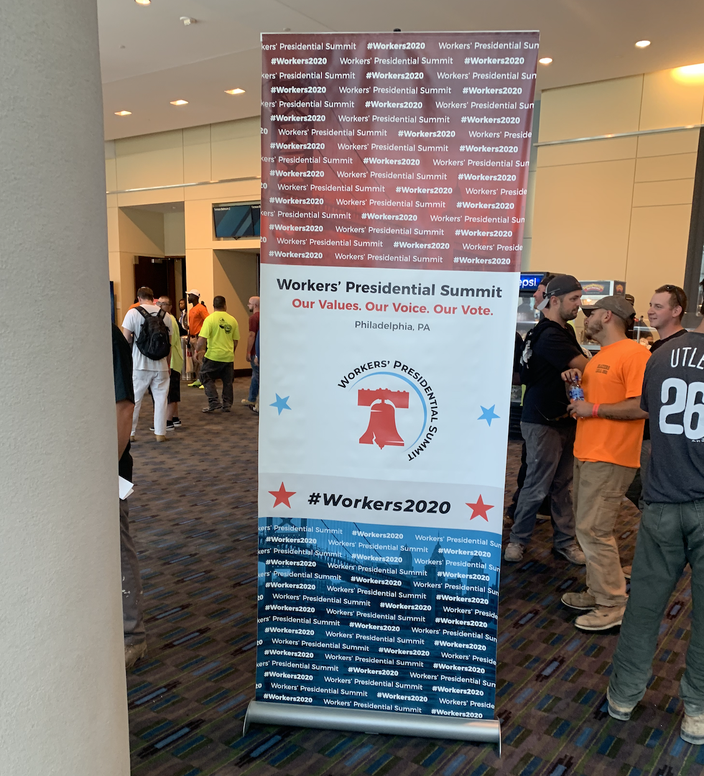 At that, a heckler in the back of the room called Sanders names, but was drowned out by "Bernie" chants.

He also, without mentioning his name, took some shots at his front-running rival Biden.

After a break, during which the crowd notably thinned out, the sixth candidate was Tom Steyer, the billionaire businessman-turned-philanthropist who first eschewed a presidential campaign in favor of a movement arguing for the impeachment of Donald Trump, but ultimately changed his mind.

Steyer called Trump "a fraud and a failure as a businessman," and indicated that he believes that failure as continued as president.

Finally, Klobuchar took the stage, touting her support of labor as a senator and of union construction projects. She also, in a nod to Eagles fans, noted that her father covered the Minnesota Vikings as a reporter, that she "remembers that playoff game," and that her home state of Minnesota hosted the Eagles' victory in Super Bowl LII.

A Midwesterner, Klobuchar vowed to avoid a repeat of the 2016 election when Democrats lost states in the Midwest.

During the forum, a new national poll was released of the Democratic presidential race. Conducted by NBC and the Wall Street Journal, the poll listed Biden in first place with 31 percent of the vote, followed by Massachusetts Sen. Elizabeth Warren with 25 percent and Sanders with 14 percent. Yang came in with 4 percent, Klobuchar 2 percent, and Steyer and de Blasio around 1 percent each.

Warren skipped Tuesday's event in Philadelphia, after appearing at a big rally in New York City on Monday night. Three other candidates – Rep. Tim Ryan of Ohio, author Marianne Williamson and former Pennsylvania congressman Joe Sestak – had been mentioned in media reports this week as participating in the forum, but ultimately did not appear.

Back in July, a different Democratic cattle call took place in the same auditorium, at the Netroots Nation conference. Secretary Julian Castro also skipped the labor event. Warren, Castro, Washington Gov. Jay Inslee and New York Sen. Kirsten Gillibrand all attended Netroot. Inslee and Gillibrand have since dropped out of the race.

"This is just the beginning," Eiding said in closing remarks, asking those present to keep the discussion going in their union halls, workplaces and families.

Some unions – and individual members – will now have a decision to make about who to back in the primary.

"It was great to hear all of the candidates talk about pretty much the same issues. We want to get their opinion before we make our decision on who to back," said Tom Romantini, of CWA Local 13000, based in Philadelphia. "Our biggest concern is making sure health care isn't affecting what we bargained, and also we want to want the standard of living for everybody, not just the people here."

He added that Biden and Sanders were both "impressive in their own way."

Barbara Cooper of West Chester, a member of AFSCME, said "I like what I heard," and added that Biden was her top choice.

"They all have really good ideas, if we could just combine them all up into one, we'd have a really great candidate."