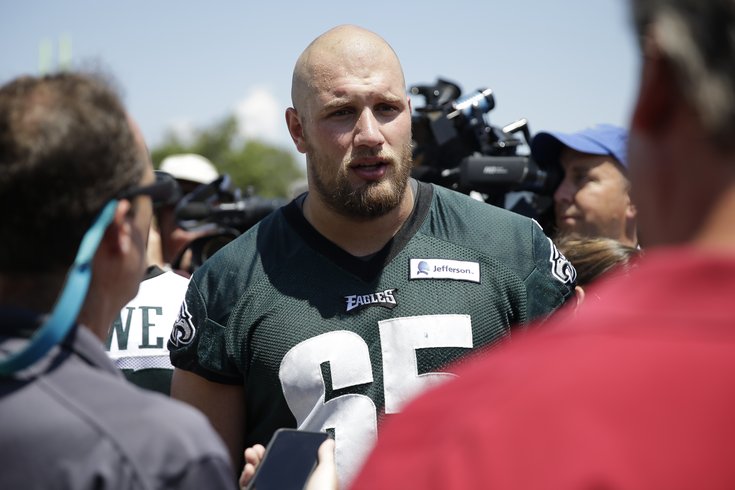 When the Philadelphia Eagles drafted Lane Johnson, they did so with the intention of him being the "RTOTP/LTOTF" (right tackle of the present / left tackle of the future).

"We had Jason Peters here," explained Chip Kelly a couple weeks ago, "so we wanted someone that could be a right tackle that could eventually move to left tackle. He had experience because he played right tackle I think his junior year before he moved over to left tackle. So he had some experience. I think that versatility is something we were really impressed with and obviously his athleticism at that position is something you're always looking for.

"So he really only had about 11 games with him as a left tackle but we felt with his athletic ability and his ability to jump, how explosive he was, his ability to run, that he was going to develop into a really good tackle. But the versatility was really a key part in that, too."

This Sunday in Dallas, if Jason Peters cannot play because of back spasms he suffered Week 7 in Carolina, we'll see a sneak preview of the Eagles' future at left tackle, as Johnson will slide over in Peters' place.

Johnson later said that he has worked exclusively all week at left tackle, and confirmed he will make the move over to the blind side if Peters can't go.

Against Carolina, after Peters went down, Johnson stayed at RT, Matt Tobin moved from RG to LT, and Dennis Kelly came in to play RG. In this case, if Johnson does indeed move over to LT, Dennis Kelly will simply fill in at RT. The Eagles' offensive line will look like this:

Part of the reason for Johnson's transition to LT instead of moving Tobin over from RG like they've been doing was because the Eagles wanted to maintain continuity along the interior of their line.

"They want to solidify the middle three," said Tobin. "Because me going from right guard to left tackle mixes the whole line up, while if us three just stay there, then the outside guys switch it up."

Left guard Allen Barbre echoed those sentiments. "I feel like maybe leaving the middle three there and letting Tobin be comfortable at RG, and Lane is a good athlete and he can move back over to the other side, I think that kind of allows everybody to have a little more comfort for certain people," said Barbre.

Newly acquired Tanner Hawkinson would be the new "fill in anywhere" guy off the bench, the same way that Barbre, Tobin, and Dennis Kelly have played similar roles in the past. "My first two years I played both guard and tackle, right and left side," said Hawkinson. "Over those years I've gotten more comfortable at those position, but I feel comfortable at all four of those."

Johnson should see a steady diet of Cowboys DE Greg Hardy at LT. While the Cowboys move Hardy around quite a bit, he mostly plays DE on the LT's side. When asked about the adjustment he'll have to make in switching sides, Johnson said, "It's just really getting your stance down, and your footwork... using your opposite leg, it just takes time to get muscle memory, I guess."

You know what happens when you draft one offensive lineman in three years? You have to start three "jacks of all trades, masters of none" if one of your stalwarts gets hurt.