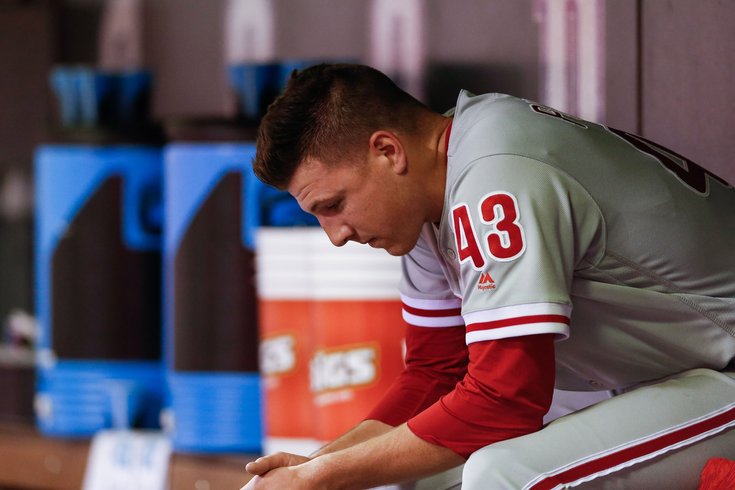 Nick Pivetta has been sent down to triple-A Lehigh Valley.

It was six weeks ago that the Phillies were contenders. Leading the Braves by a game in the NL East on August 11, Philadelphia was 14 games above .500, had a Cy Young front-runner as their ace and were exceeding expectations all across the big leagues.

Since that day, the Phillies have gone 13-29 and are below .500 at 78-80. Last weekend they were eliminated from playoff competition and and Phils have gone winless for seven games.

It has been a meteoric fall from grace and a collapse that has reached a rock bottom with Philadelphia outscored by the Rockies 34-4 in their recent three-game series sweep.

The attention has already shifted to 2019 but many are still coming to grips with what just happened. The Phillies completely fell apart. Sure, the Phillies were playing better than the sum of their unproven and youthful parts. But showdowns against the Red Sox and other top MLB teams during their eventful summer did show they had potential to succeed.

With 2018 reaching an ugly conclusion, where do they go from here?

"It’s been miserable for just about everybody up and down the organization," Phillies GM Matt Klentak told reporters, via NBC Sports Philadelphia and Phillies beat writer Jim Salisbury. “Significant changes are necessary. But I think we all need to fight the narrative that it’s a simple fix. There’s a lot of things we can do and we’re going to address a lot of things.”

The full gambit of possible transactions seem on the table for what could be an entertaining offseason for the Phillies, from making subtle moves, to trading away some underachieving players to making a run at the top free agents, players like Bryce Harper and Manny Machado.

One thing that won't be happening will be the replacement of unconventional manager Gabe Kapler next season.

“Expectations were fairly modest,” Kapler said of the hiring of the first time manager. “When we hired Kap, we knew that he is progressive. In my judgment, this was a good year to be progressive and try new things because expectations were modest and we had a lot of young players and a new manager. Some of the things we’ve tried have not worked, some of the things that he’s done and that we’ve done as an organization have worked really well. I think this was a good year for us to experiment, try new things, grow forward and we made progress."

Very rarely does a team make the jump, particularly in major league baseball, from losing 96 games as Philly did in 2017 to making the playoffs, like they seemed poised to do up until the end of August. According to the Phillies' GM, the growing pains from a tough 2018 are necessary for the team's hopeful ascension to real contention in the near future.

"We didn’t make enough progress to make the playoffs and there was a time in midsummer when it looked like maybe we were and then we didn’t," Kapler said. "But I think in order to take this organization where it needs to go we had to have a year like this, where we pushed the envelope.”