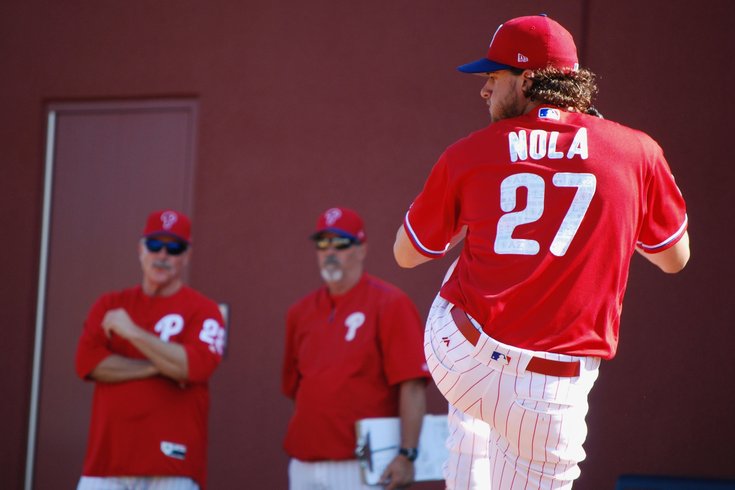 Aaron Nola had an MRI on his ailing back on Thursday, but the results were encouraging. He could begin a brief minor league rehab assignment this week.

Aaron Nola had hoped Friday would mark his return to a major-league mound for the first time since April 20.

Instead, Friday marked Nola’s first day since having to have his midsection run through an MRI machine. Thankfully for the 23-year-old pitcher and the Phillies, the results were encouraging and his return could come before long.

Nola, placed on the DL with a lower back strain on April 24, will throw a side bullpen session this weekend with the hopes of going on a short minor league rehab assignment next week.

“It’s certainly good news,” general manager Matt Klentak said prior to Friday’s game against the Washington Nationals. “(The MRI) really revealed nothing cornering at all, which is what we’d hoped. It precautionary MRI and it came back clean. He will continue to work through it.”

Nola had hoped to miss just one start while on the disabled list, but still felt some discomfort when he threw a bullpen session earlier this week in Chicago. Rookie Nick Pivetta is set to start in Nola’s place against Washington.

The Phillies added another pitcher to the active roster on Friday when they recalled right-hander Jake Thompson from Triple-A Lehigh Valley, optioning utility man to Ty Kelly to Allentown to open a spot. Thompson’s stay could be brief (like fellow starter Ben Lively’s similar call-up last month) as he’s basically on the roster to give Pete Mackanin’s overworked and struggling bullpen an extra arm for a period.

Speaking of that 'pen...

The Phils’ relief corps has given up a major league-high 21 home runs this season, four more home runs than the four teams tied for the second most. Five of those home runs came on the team’s just-completed road trip, and if you feel like it had to be more than five, you’re not alone.

Still, the Phils maintain faith in the arms in their bullpen.

“It's a nice mix of veterans and young players, guys with different arm slots, different pitch types – we like the way the bullpen is constructed,” Klentak said. “We're giving up too many home runs. I think that's true of our pitching staff in general, not just the bullpen. And that's something we expect will regress more towards normalcy at some point.

“One of the things that's tough about pitching in the bullpen and that makes good relievers impressive is that the performance of a bullpen is emotional. If a starting pitcher gives up four runs in six innings and you lose 4-3, you don't think much of it. When the starting pitcher gives up three runs and then you give up the fourth run in the ninth and lose on a walk-off, that stings more. It's the same score, same outcome, but it's emotional. And that's what's happened recently. We've had some emotional leads that we've lost late in the game. But I still have a lot of confidence in this group. I think we're still seeking roles.”

As Klentak said, the Phils were fortunate to have the Jeanmar Gomez emerge as the team’s unlikely closer a week into the 2016 season, which, in turn, provided stability and defined roles for the rest of the ‘pen. It hasn’t worked out anywhere near as easily five weeks into the 2017 season.

“That’s the challenge right now,” Mackanin said. “We've got good enough pitchers; whether I use a combination of (Hector) Neris, (Joaquin) Benoit, even (Pat) Neshek or (Edubray) Ramos, we'll try to figure it out. … Believe me, I don't want to flop anymore. I want to count on an equation I can go by, like last year.”

Currently, Mackanin said he’d like to continue to give Neris an opportunity in the ninth inning.

“Against Miami (on the last homestand) he threw one inning in seven pitches – that's what I'd like to see,” Mackanin said. “Challenging hitters in the strike zone. Using your stuff, using that split to get people out. That's what I'm leaning towards; that's what my thoughts are. Getting him into some kind of role that builds confidence.

“But at the same time, I don't want to put the onus on anybody who's not a bonafide former closer. You've got to be careful with that, because if name one guy the closer, what happens if he fails? Then what? At some point, you have to do what you think is right for the team. It's a chore.”