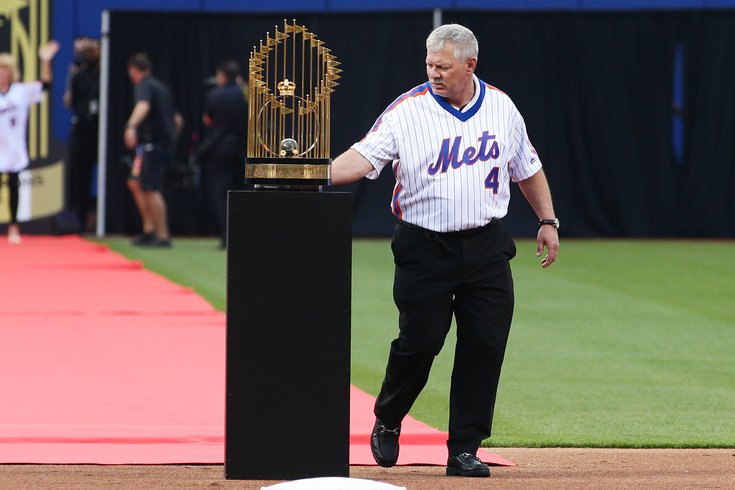 Lenny Dykstra will reportedly fight Chris Morgan, also known as the Bagel Boss Guy, in Atlantic City in September. Dykstra, a former outfielder for the New York Mets and Philadelphia Phillies is seen above during ceremony honoring the Mets 1986 World Series Championship team in 2016.

The latest development in one of 2019's most online stories has taken a wild left turn: Former Phillies outfielder Lenny Dykstra reportedly signed a deal over the weekend to fight Bagel Boss Guy next month in Atlantic City.

Yes, this is actually (reportedly) happening.

Bagel Boss Guy is Chris Morgan, a Long Island man who went viral in July for a big, dumb meltdown at a bagel shop. In the video, Morgan cursed at and threatened people in the bagel shop, before he was taken down by a larger man. In case you didn't know about this already, we know: It couldn't possibly be stupider. But it's what we've got.

For a fleeting moment, it seemed Morgan's fight would be refereed by reality TV personality and general meltdown king Bam Margera, but Margera is instead returning to rehab.

How Dykstra became part of this ordeal is unclear. The last we heard of Dykstra, he was pleading guilty to a petty disorderly persons offense after threatening a New Jersey Uber driver. But alas, TMZ reports Monday that Dykstra inked the deal and is "very confident he's gonna beat the hell outta" Morgan.

As PhillyVoice's Michael Tanenbaum noted last month, whether this fight will actually materialize is dubious. Feldman once promoted a fight between George Zimmerman and rapper DMX, but it never happened.

If it does eventually go down, it will probably be a spectacle of stupidity, right at home in Atlantic City.