A lesson in fake news: The faux call for removal of the 'Rocky' statue

The "Rocky" statue near the Philadelphia Museum of Art.

For the past week, Philadelphia has been captivated by the debate over the statue of former Mayor Frank Rizzo outside the Municipal Services Building across from City Hall.

Calls for the statue's removal because of Rizzo's controversial past, particularly in the black community, have come and gone in waves for years. But those calls have recently intensified with the backing of prominent activists and city officials after the violence in Charlottesville and the removal of Confederate statues across the country.

Whether you believe Rizzo should be toppled or remain standing, something we can all take away from the controversy is a little lesson in media literacy.

This is a story of how fake news comes to be, specifically on social media.

As the potential removal of the Rizzo statue became a bigger story, conservatives created a popular meme to mock the issue. It has different variations, but the meme shows a picture of the statue of Rocky Balboa outside the Art Museum and calls for its removal because the fictional character beat up "a black guy... Twice." 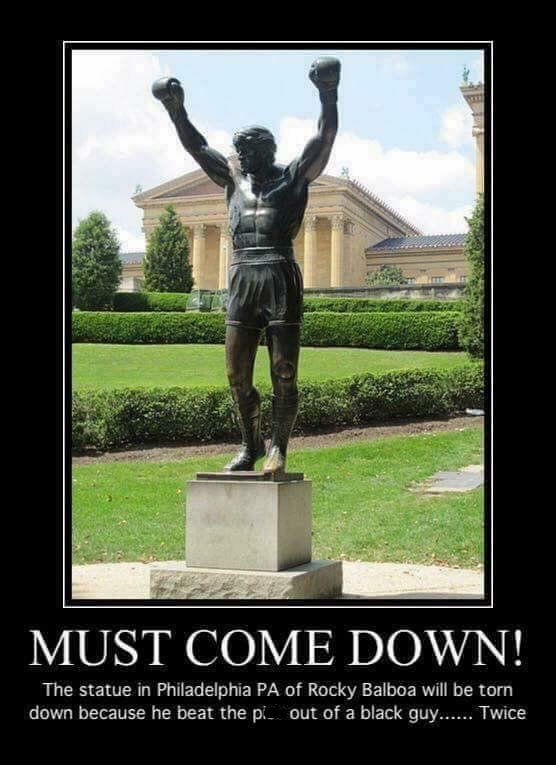 The meme, and its variations, became popular on Facebook, with those sharing it suggesting that if the Rizzo statue comes down, the Rocky statue should be next, implying that liberals are pushing too far for other symbols of perceived racism to be removed. 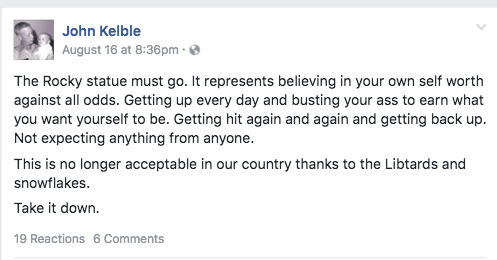 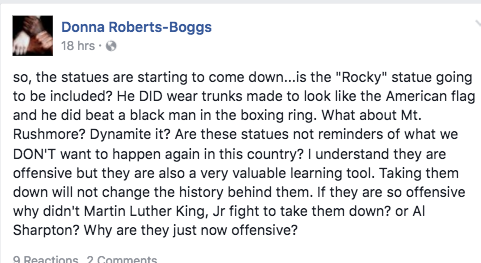 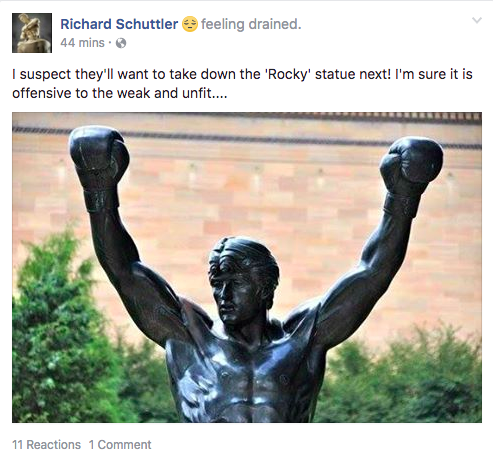 This is notorious racist Rocky Balboa, known for beating up Apollo and Mr T and making friends with Russians. I demand his statue be removed pic.twitter.com/BT0eUsd5nr

Soon, the sarcasm amongst those sharing it became slightly harder to detect, as users began playing it straight with their posts, at first with seemingly genuine calls for the Rocky statue to be toppled. This trend culminated with one user creating a satirical CBS news article about protesters actually calling for the statue to come down because it was offensive to Russians (Rocky fights a Russian boxer in another one of the franchise films). 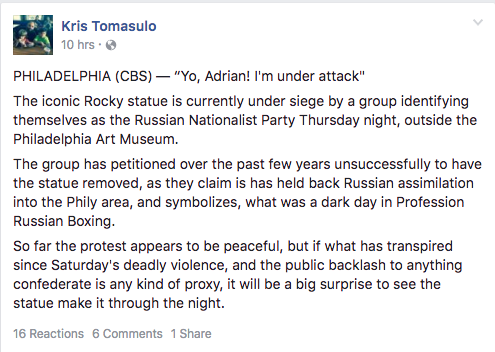 As the joke and meme proliferated on Facebook and Twitter, it was only a matter of time before some took it literally. Case in point:

They were talking about the Rocky statue? It gets more ridiculous all the time.

I don't know if this is legit. I really hope not @JackPosobiec @rockystatue @phillypolice pic.twitter.com/zIfdfcAAEm

It even fooled an apparent liberal, who interpreted the meme in a wildly different way: 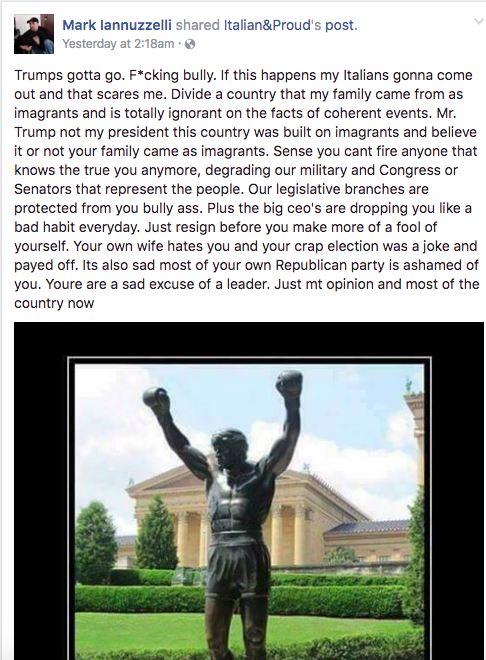 It's a small sample size, and most realized it was a joke. But that, my friends, is how fake news comes to be. It doesn't always require a barrage of fake reports, or help from Russian agents. Like a dried-out field in the heat of summer, social media needs but a small spark before a fire spreads and someone gets burned.

The takeaway: Don't believe everything you read on the internet. Especially memes.