They only want you to think that's fake blood 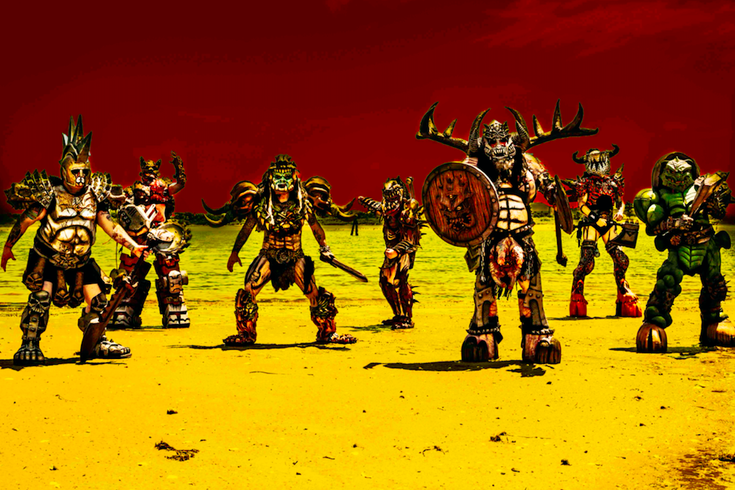 The Richmond, Virginia-based band has been performing for metal heads since 1984.

If you’re one of the brazen braving a GWAR concert, you probably know what you’re in for.

Get close enough to the stage, and prepare to be doused in torrents of fake blood, guts and semen.

Yes, this – while rocking out to heavy metal brought to you by the band known for their grotesque masks, costumes, bloodied makeup depicting open sores and wounds and general carnage. After all, these are barbaric, interplanetary warlords who have come to take over Earth and destroy everyone and everything in their path.

I’ve had an interest in this band since an old friend told me about her experience circa 2005, and I couldn’t believe my ears. Their over-the-top violent, sexual and scatological humor has maintained a loyal following for 33 years.

With songs and albums like “Womb With a View,” “This Toilet Earth” and “Carnival of Chaos,” I had to know more.

Pustulus Maximus (Brent Purgason), lead guitarist of GWAR, recently spoke with me in anticipation of a Sunday show at The Trocadero in Chinatown. While there has been a rotating roster of rockers in the band over the years, he currently shares the stage with Balsac the Jaws of Death (rhythm guitar, vocals), Jizmak Da Gusha (drums), Sawborg Destructo (vocals), Beefcake the Mighty (bass), Bonesnapper (vocals), Blothar (vocals) and Sleazy P. Martini (vocals).

Rumored to be the meanest of the shock rockers, Pustulus said the reason for that is his “very realistic outlook on life.”

“There’s nothing to look forward to but death, and everybody else just gets in my way,” he said.

I had to laugh.

“We have to defend ourselves violently against people who try to come on stage. [President] Donald Trump tried to get on stage with us at Warped Tour and we had to dispatch him very quickly.”

It seems, at concerts, GWAR’s most diehard fans love getting sprayed in the face with fake blood. When I asked Pustulus about what is used to make this concoction, he scoffed at my doubt.

“It might appear to be fake, but that’s because we do a very good job of making it look that way so nobody arrests us,” he said.

“We had to murder a whole lot of people just to get enough blood to get on this tour. The entire island of Haiti was killed, but thankfully, the fake news doesn’t report on stuff like that, so we were able to get away with – literally – murder.

"Don’t go to the police, but I’ve spent a lot of time back stage making sure there’s enough semen. We all do. We have a big circle jerk into a 50-gallon drum to make sure that we have enough fluids to spray on the crowd. And that’s why a GWAR show is unlike any other. Other bands, they just play music for you, but GWAR, we sacrifice our own bodily fluids so you can enjoy yourselves at our show.”

Another part of GWAR’s shtick is “disemboweling,” decapitating and mutilating dolls and mock-ups of celebrities, politicians and other public figures on stage. I asked Pustulus who was his favorite target and who might be next.

“I never get tired of disemboweling politicians because they just deserve it. You know, I kind of find joy in killing in general.”

Finally, I was curious to learn what I might find should I take a peek inside GWAR’s tour bus.

“Lots of kilos of cocaine, illegal drugs, weapons, things like that,” he said.

Expect the band to play many of their old hits, as well as some stuff off their new album, “The Blood of the Gods," on Sunday, Oct. 29, at The Trocadero Theatre.