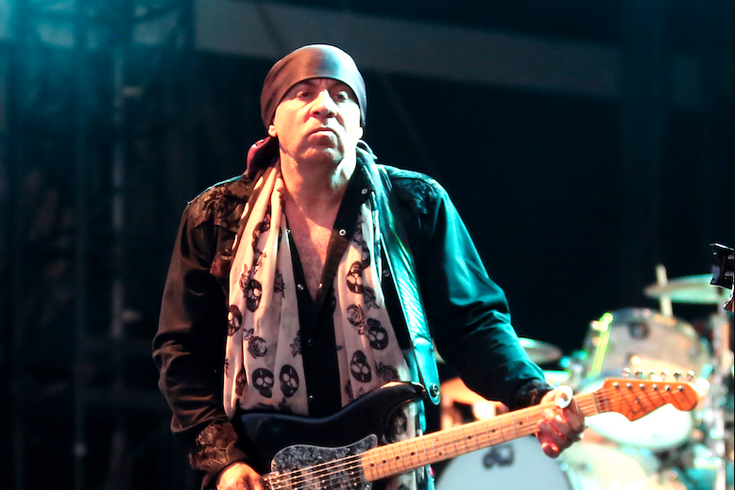 Little Steven Van Zandt has done (and been) a lot of things over the last 18 years. He’s acted as Silvio Dante in HBO’s “The Sopranos” and Frank "The Fixer" Tagliano in Netflix’s “Lilyhammer.” He’s curated his Sirius XM radio channel, “Underground Garage,” with the very best of new and vintage garage rock from around the globe. He produced a theatrical musical, “The Rascals: Once Upon a Dream,” with his boyhood heroes for Broadway and beyond. And of course, Van Zandt has acted as guitarist, band leader and consigliere to his old pal, Bruce Springsteen and the E Street Band on a handful of recordings and tours.

“I’m a helluva guy. What can I say?,” he said with a laugh when asked about his busy schedule and his deep connection to fans.

“I’m a working class celebrity. It’s a job that I do which is nothing more special than any other job anyone else does. I even go to an office.”

What Van Zandt hasn’t done in nearly 20 years is write and produce solo albums or tour on his own, something he did with vigor and politicized passion from 1982 (“Men Without Women”) to 1999 (“Born Again Savage”). Now, Little Steven would like to remedy that, first with the release of his new album, “Soulfire,” and its accompanying tour that brings him to Philly’s Electric Factory on Sunday.

“Philly, c’mon, that was like a second home to us,” said Van Zandt, reminiscing about early Jersey Shore days with both The Boss and Southside Johnny & the Asbury Jukes.

Van Zandt so missed the horn-heavy, R&B-branded rock of the Jukes – an act whose albums he produced and composed – that he included several of their songs such as “I Don’t Want to Go Home,” on “Soulfire.”

“That’s what I wanted to do with this album – to do me. I usually write songs with some larger theme. This time, I became my own theme. That’s why I covered some of my old songs. It’s the best way to re-introduce myself to me, as well as an audience...Plus, I wrote a few new songs along the way for who is ever interested.”

Ask Van Zandt why he stopped making such super-charged rock n’ roll as he did in the 1980s and 90s, and he stated that there was no excuse besides suddenly getting busy with other work.

“Especially acting and producing, the whole craft,” he said.

“That craft, gifted to me first by David Chase [the writer-producer of “The Sopranos”] gave way to other crafts like writing the soundtrack to 'Lilyhammer' and directing the last episode. Then Bruce [Springsteen] decided to put the band together again and tour, so there’s that. Before you know it, 20 years go by. Seriously.”

After calling rock, roll and soul something of an endangered species, Van Zandt said that with his newest album that he wanted to make sure that “the stuff that motivated us – or at least me – in the first place, stays alive. That means James Brown, the blues, street corner doo wop, what Chuck Berry started talking about in his teenage operas, then, Bob Dylan took further with his socially impacted political fare. All of it is fair game.”

And Van Zandt does not intend to stop sounding off solo now that “Soulfire” has hit the streets.

“There’s gonna be more music too,” he said. “A lot of it. I actually felt guilty that I had these songs inside me, and that I put my – you know, soul – my music aside for so long so. No more though.”