Plus, former first-round CB Adoree' Jackson will visit the Eagles next week 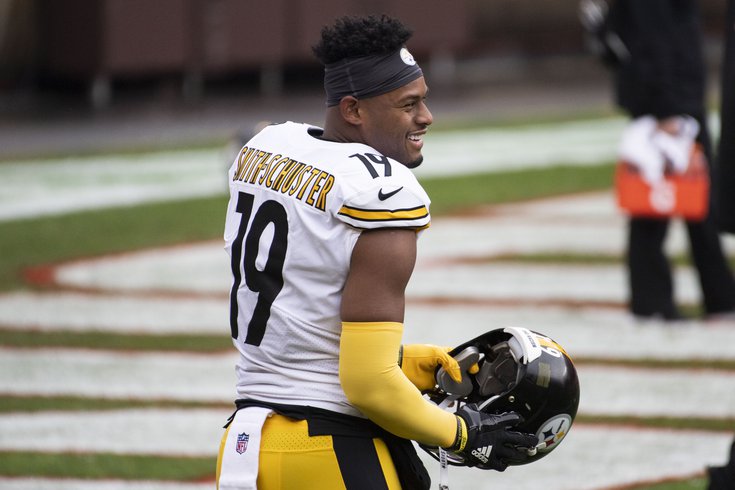 UPDATE: [4:54 p.m.] — It appears free agent cornerback Adoree' Jackson will indeed meet with the Eagles early next week, a day after he's scheduled to meet with the New York Giants. The visit was first reported by Josina Anderson, but now we have dates for his visits.

UPDATE [3:15 p.m.] — According to Josina Anderson, the Eagles could be bringing in free agent cornerback Adoree' Jackson for a visit, but not before he meets with their division rivals to the north. Here's the latest:

I'm told that former #Titans CB Adoree Jackson is currently discussing visiting with the #Giants on Sunday, and potentially the #Eagles after that, per source. Jackson, like a good son, is trying to work around his mom's birthday. We'll see if that timeline gets pushed some.

Jackson, 25, was a first-round pick for the Titans in 2017 and started 41 games in four seasons in Tennessee, recording two interceptions and 33 passes defended. He also missed nearly all of the 2020 season with a knee injury before being released last week. Stay tuned...

UPDATE [1:55 p.m.] — Almost as soon as I hit publish on the last update, it appears Adam Schefter got an angry call from the Eagles about the information contained in his previous post about the Eagles being "secret suitors" for Juju Smith-Schuster because he then sent out this tweet:

In this case, JuJu Smith-Schuster’s agent called the Eagles to gauge their interest; those were the discussions. The Eagles did not wind up courting him. JuJu back to Pittsburgh, which was what he wanted. https://t.co/IWTvGIfzxs

At this point, I don't even know what to make of all this back and forth other than the Eagles appear to have had a chance to land the young receiver but didn't really engage, likely because of the cost and their general lack of cap space. Stay tuned, because there could be another update any minute that Howie Roseman actually rode bikes with Smith-Schuster last week when the weather was nice, followed but a further update that they actually just took part in the same Peloton class.

UPDATE [1:42 p.m.] — News came down on Friday that free agent wideout JuJu Smith-Schuster was resigning with the Steelers on a one-year deal. And while that move took a potential wideout target off the board for the Eagles, it wasn't necessarily what you'd consider a Philly-centric rumor.

JuJu Smith-Schuster also turned down more money on a multi-year deal from the Eagles than he took to return to the Steelers, per source. The Eagles’ were a secret suitor. But Smith-Schuster loved Pittsburgh and its fans too much to leave. https://t.co/X8gitZYxwd

That... is certainly something, especially considering the Eagles don't necessarily have a ton of money to spend in free agency.

Perhaps they were willing to commit to a big WR signing to guarantee success to a certain degree, after some recent misses at the position in the draft. It's also worth wondering if that would've taken them out of the running for a wideout in the upcoming draft, and if they would've instead focused on a QB (or, with Deshaun Watson rumors swirling, some other position of need).

Or, perhaps this is all just talk. It really depends where the leak is coming from — Smith-Schuster's agent, perhaps trying to show Pittsburgh fans how special they are to the WR, or someone within the Eagles (read: Howie Roseman) trying to placate Eagles fans who are hungry for any sort of consequential move.

Hey, look, we're trying to get some big-name players!

Maybe they are. Maybe they aren't. But if they are, wouldn't this be better kept to yourself? A guy turning down more money to play for another team isn't exactly the best look.

Free agency has been relatively slow-moving thus far, especially for the Eagles.

A large reason for that is the limited number of resources at general manager Howie Roseman's disposal, with his team having little in terms of salary cap space. The Eagles do, however, have 18 draft picks over the next two years, so perhaps there's a chance the Birds' biggest splash comes via the trade market, what with their (twice) reported interest in Texans QB Deshaun Watson.

But with the Eagles losing so many players this offseason, they're going to need to add via free agency, and on Thursday GM Howie Roseman and Nick Sirianni discussed precisely what they'll be looking for in this second wave of free agency, now that the initial frenzy has quieted down. Here's the full text of what they had to say...

ROSEMAN: In terms of the next couple days and next couple weeks, every day we're meeting about the players that are available, we're talking about the players who are available with our personnel staff, with our front office staff, with our coaching staff. We're looking to see what the fits will be. We're looking for guys that we think fit our scheme, that we think fit our culture, and we think have an opportunity to be here as we kind of build this thing back.

If there's an opportunity to improve our team, we're going to look at that. We're continuing to do that. I would say if the fit's right, we'll do it.

Now, we're not in the same position that we've been in years past with our cap situation, but we're hopeful that this is just a short period of time that we're like that, and we move on and going forward, that we'll have the flexibility back to be able to do that.

We are excited about the amount of draft picks we have, not only to draft players but also because they give you capital, to go out and be aggressive if you want to be, and give you options.

SIRIANNI: As far as what positions and what you need at each position, every position's obviously a little bit different of what you need, right? You're looking for the pieces. There's been great communication between Howie and his staff and the coaches and myself. Those have just been such good conversations of just painting the picture of what types of players fit the things that we're looking to do.

As far as talent-wise, that's the type of talent we're looking for. Again, it’s different at each and every position. Again, you're just trying to fill the roles that it takes to be successful at some of the plays that are staples in your offense.

First obviously talent is the main thing. [Jokingly] Like I have those four things, but you don't want me suiting up on Sunday. But talent is the first thing. The second thing is the character of the player.

Those four things, that is something we're looking for from each guy.

OK, that's a lot to take in, especially from the new coach. And, as we all know, actions speak louder than words. So far, there's been a lot of inaction on the Eagles side of things, but that could change at any moment.

When it does, we'll have you covered with all the latest news and rumors right here in our live free agency tracker.