The Birds also missed out on Kevin King, but Mackensie Alexander and Gareon Conley are still options 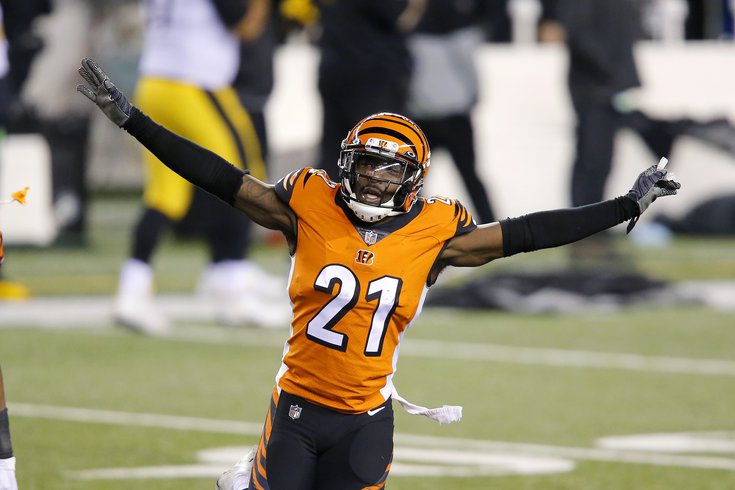 UPDATE [2:17 p.m.] — With the free agent cornerback market drying up (see below), the Eagles might've just been given a gift. According to Field Yates, the Steelers were trying to find a trade partner for CB Steven Nelson, but after being unable to do so they decide to just release him.

After being unable to find a trade involving him, the Steelers have released CB Steven Nelson.

Nelson, a six-year vet spent the last two seasons in Pittsburgh after being drafted by the Chiefs in the third round back in 2015 and has made 68 starts in his career. He's also been durable, as he has missed just two starts over his last three seasons and has recorded seven interceptions over that time.

He might not be the flashiest option, but signing another corner to play outside would allow Avonte Maddox to move back inside where he's been much better in his career. Stay tuned...

UPDATE [2:02 p.m.] — The Eagles are in the market for a backup quarterback — and recently had Joe Flacco in the building for a visit — but it appears one potential option for the Eagles, who we wrote about earlier this month, is no longer an option: Marcus Mariota. He's reportedly returning to the Raiders.

After being unable to find a trade involving him, the Steelers have released CB Steven Nelson.

There was a thought that Vagas might try to trade him or, more likely, release him to avoid what was expected to be over $11 million this season and that the Eagles or some other team might be able to sign him for a reduced rate if they did indeed release him.

Instead, they were able to bring him back for a much more reasonable price for a backup that could go up, should he wind up actually playing for the Raiders.

UPDATE [11:02 a.m.] — You can take free agent cornerback Kevin King off the board as an option for the Eagles, as he will return to the Packers on a one-year deal worth $6 million, according to multiple reports.

The Eagles will have to now turn their attention elsewhere, and there are still some options despite CBs suddenly getting snatched up like crazy. Two potential fits for the Birds remains Mackensie Alexander, who sounds like a character from Outlander, and Gareon Conley, who — you know what? — also sounds like an Outlander character.

Both players were mentioned by Mike Kaye in the post we discussed below, but it's not like they're last-minute desperation options for the Birds. In fact, Dave Zangaro of NBC Sports Philadelphia mentioned both back in February, long before free agency even began. Here's what he had to say then...

Alexander was a second-round pick out of Clemson back in 2016 and played under Gannon in Minnesota for the first two years of his career. Alexander played the 2020 season in Cincinnati on a one-year deal, playing in 13 games and starting 10. It was the most games he’s started in his career. At 5-10, Alexander is still best suited for the nickel, which is where he played over 80% of his snaps last season.

Conley (6-0, 190) has been a disappointment since he was drafted at No. 24 out of Ohio State back in the 2017 draft. After spending the first two-plus years with the Raiders, Conley was traded to the Texans during the 2019 season. He missed the entire 2020 season with injury. The Texans declined his fifth-year option so Conley will be an unrestricted free agent when the 2021 league year begins. If the Eagles get him for the right price he could be a low-risk, high-reward signing. We know he has some talent. While the Eagles can’t load up their roster with these players, it’s a way to bargain shop during an offseason where they don’t have cap space.  [nbcsports.com]

What will the Eagles do? We'll see, but at the rate things are moving, they better act fast. One of those guys could be signed before I even finish writing this sentence...

Some days, it's hard coming up with a fresh lede for our free agency tracker, especially this offseason when the Eagles — and the rumors typically attached to them throughout the process — have been more quiet than usual. But today was not supposed to be one of those days, because today was the day Adoree' Jackson was coming to visit the Eagles, possibly helping the Birds address one of their biggest needs in free agency.

There was actually something to talk about!

As it turns out, "was" is the key word there, as last evening Jackson signed a three-year, $39 million deal with the Giants, whom he was visiting a day before his scheduled meeting in Philly.

Adoree’ Jackson started off the right way for #Giants fans: By cancelling on the Eagles.

And now that he's off the board — after days of Eagles fans clamoring for Howie Roseman to land Jackson — the Philly faithful will probably turn on Jackson and decide he was never the right fit for the Birds, he was overrated, the Giants overpaid, and so on. It's the way free agency has always worked in this town, and it ain't changing now.

In the case of Jackson, however, they may have a point...

Adoree Jackson has 2 career interceptions and got his hands on 7 passes over the last two seasons in the 14 games he played and got paid in a soft market from a team that is desperate for corners. How does this make any sense?

Oh, god, now you've got me doing it too.

Either way, the Eagles will now have to turn their attention to the rest of the free agent cornerback market, and the options aren't all that overwhelming. That is probably fine for a team that isn't expected to be a contender in 2021 and might be better served saving whatever little cap room they do have for next offseason, when there should be no shortage of players available — and when Roseman will have considerably more cash at his disposal.

But if they do look to sign a free agent cornerback, whether that's for depth or as a potential starter to line up opposite Darius Slay, they should have some options. And, as NJ.com's Mike Kaye outlined in his story from Monday night, there are three very reasonable veteran options for the Eagles on the open market.

King, like Gareon Conley and Jackson, would be a high-upside addition. While he’s coming off a forgettable season with the Packers, King has the size (6-3, 200 lbs.) and playmaking ability (six career interceptions) to rebound in Gannon’s presumed zone-heavy scheme. King could be signed to a one-year “prove it” deal, and a bounce-back campaign could lead to a long-term tenure in Philly.  [nj.com]

The Eagles could certainly do worse, and if they don't address the position in free agency they could always use a high draft pick on a CB or simply add depth in the later rounds, as they have plenty of holes they could fill with that No. 6 pick.

No matter how it plays out, we'll have you covered with all the latest rumors and breaking news right here in our live free agency tracker...