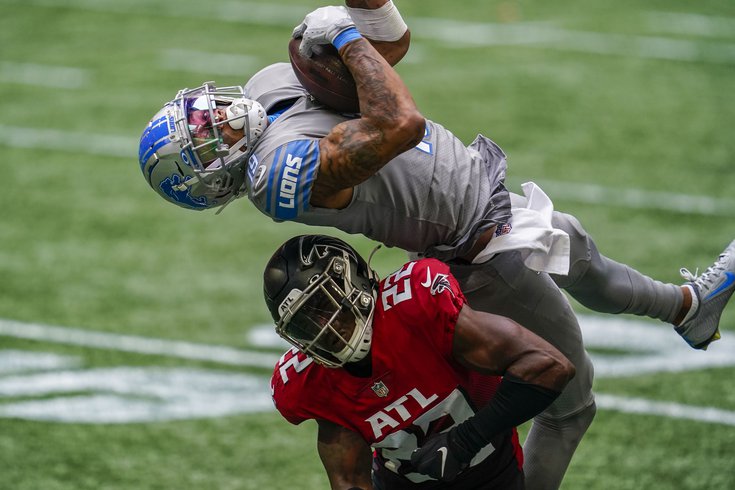 After each of the first four days of NFL free agency, we recapped all the gains and losses of the Dallas Cowboys, New York Giants, Washington Football Team, and of course, the Philadelphia Eagles.

After stalling a bit over the weekend, the action has picked back up. We'll review each team's most recent moves in the order of their finish last season.

• Signed WR Kenny Golladay: The Giants signed Golladay to a four-year deal worth $72 million, and $40 million guaranteed. That now ties him with the Chiefs' Tyreek Hill and the Browns' Odell Beckham Jr. as the sixth-highest paid wide receiver (based on AAV) in the NFL. Golladay is certainly a good starting receiver, but that is elite receiver type of money.

As you can see, Golladay is a consistent down the field playmaker, based on his career yards per catch average of 16.8. He also led the NFL in touchdown receptions in 2019, with 11. He missed 11 games in 2020 with hamstring and hip injuries, but should be fine going forward.

Golladay is a bigger receiver, at 6-foot-4, 214 pounds, and while he doesn't get a ton of separation, he is a contested catch machine. Some of the grabs in the following highlight reel display Golladay's impressive hands and body control.

There's no question that that Golladay will improve the Giants' offense. However, the above video isn't just a Kenny Golladay highlight reel. It's also a Matthew Stafford highlight reel. Most of those throws are not only outstanding, but they also require the willingness to "throw open" a covered receiver. Stafford could do that. Can Daniel Jones?

The Giants are set at the skill positions. When the Giants are in 11 personnel, it will be Golladay, Darius Slayton, and Sterling Shepard, with Evan Engram at TE and, of course, Saquon Barkley at RB. When they run two tight end sets, Kyle Rudolph will come in off the bench. It's a formidable group. The big question offensively with the Giants, however, as always, is whether their lack of a competent offensive line will ultimately doom them.

• Signed CB Adoree' Jackson: Jackson was scheduled to meet with the Eagles on Monday night, but that got canceled because the Giants paid him... holy crap... what?!?

More on Adoree Jackson’s deal with Giants, per sources:

Good Lord, that is a ridiculous overpay. A week ago, the Titans cut Jackson because they didn't want to pay him $10.2 million for one year on his fifth year option. The Giants will instead pay Jackson significantly more, and for a longer period of time. Had they simply thrown the Titans a seventh round pick before Tennessee cut him, the Giants could have had him on a less expensive deal with a shorter commitment. But also, expensive cornerback deals in free agency are extremely risky:

But it's also the long-term commitment that would scare me as much as the AAV of the contract if I were a Giants fan. After three good years to start his career in Tennessee, Jackson had a weird 2020 season, in which he missed the first 13 games with something of a mysterious knee injury. There were hints that the Titans were expecting him to return sooner.

When he did return for the final three regular season games, plus a playoff game against the Ravens, Jackson did not play as well as he had his first three seasons in the NFL. The Giants were evidently satisfied with Jackson's explanation for his 2020 season, and his medicals, because again, holy crap that is a big contract for a player with some potential red flags.

If there are no worries about Jackson's desire to play football, he is a talented athlete and a legitimate starting-quality cornerback. In his first three seasons, while he only picked off two passes, he got his hands on a lot of footballs, as he had 33 pass breakups in 43 games. Also, though not a big hitter by any stretch, he was also thought of as a solid run defender, as he racked up 167 tackles during that same span. As an added bonus, Jackson is a good punt returner who has averaged 8.8 yards per punt return in 53 career attempts.

Like with Golladay above, Jackson makes the Giants a more talented team, but that is a far bigger contract than anyone could have reasonably expected him to get.

• Signed LB Keanu Neal: Neal played safety his first five years in the NFL, but he will be moving to linebacker for the Cowboys. That makes sense. Neal has been a decent enough box safety over his career, but a liability in coverage against wide receivers. He signed a one-year deal worth $5 million.