The creator from Montgomery County by way of Liverpool, England hopes a niche creation could go global 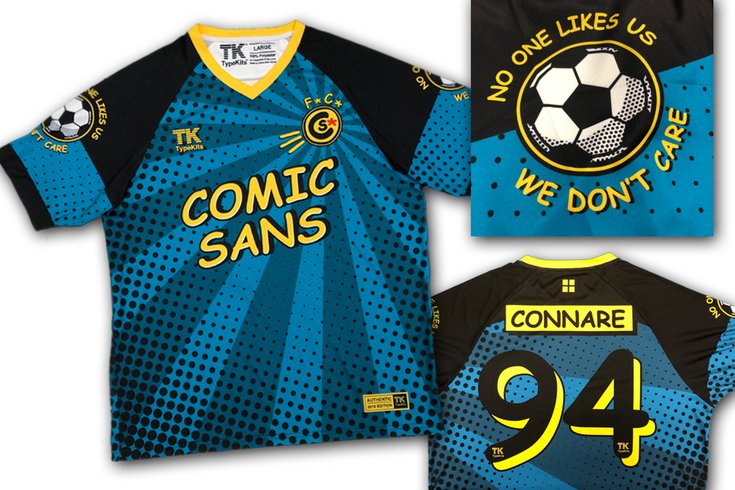 TypeKits' design for the 'Comic Sans' soccer jersey addresses the widespread public disdain for the typeface.

Just last week, that creative blend prompted him to launch TypeKits, which the 47-year-old Liverpool native who moved to the area in 2006 describes as “a mash up of football (soccer) jerseys inspired and influenced by famous typefaces, designers, and typographers.”

On first blush, soccer kits created in honor of typefaces like  Helvetica, Futura,  Optima, Johnson, Franklin Gothic and (of course) the widely-mocked Comic Sans seems like a rather niche pursuit.

If the Kickstarter campaign he launched from his Montgomery County offices last week hits the $16,000 goal by October 11, though, you could soon see an initial run of 800 of the unique creations out and about both locally and – Jenkinson hopes – internationally. From there, the market will decide how far the concept will go.

It hasn’t exactly been the smoothest of starts since taking the idea public.

For one thing, when he told a couple friends about it, they reminded him of his disdain for similarly minded thought exercises when Major League Soccer franchises are “reimagined as NFL teams” or “Game of Thrones (characters) play soccer.”

For another, he’s been sidetracked with the due diligence of confirming there aren’t any copyright concerns since fonts – but not typefaces – can be subject to them. As things stand, Jenkinson's project is live on Kickstarter pending trademark reviews which he hopes break his way.

“'What a pile of crap: you’re getting into the territory you hate,’” he recalled during a Monday morning phone interview of one friend’s reaction. “But, there’s nothing arbitrary here. I’m not just making up the design without some relevance to the history of each typeface. I love soccer, typefaces, and design, so I thought it might resonate.

“I’d always been playing around with the idea, and I have a bunch of half-finished designs sitting in a folder, ones that I don’t know what to do with at that moment in time. Every now and then, I go back and look at them with fresh eyes, since I work in a vacuum.”

Jenkinson, of Narberth's Limepickle Design Co., said those fresh eyes got the ball rolling one free April afternoon. Having long created designs for shirts and other apparel, he rattled off a list of projects with which he’s been involved.

Among them are award-winning designs for the “River Cup” through his Sons of Ben ties, and his work with Asbury Park F.C., the soccer team that “doesn’t actually play soccer.”

The path bringing soccer and typefaces together clicked when he thought about how he mashed-up the history of Helvetica with the design for Metallica’s “Master of Puppets” cover-art concept, complete with track listings.

“If I can get a proof of concept going – to show the market’s there – and at least get to full funding, I think this has got some legs here,” he said. “I think it might resonate.” 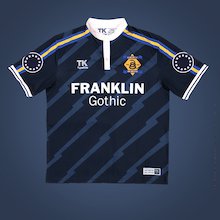 He’s already created 12 designs, a home and away kit for each of the six typefaces involved, and has spoken with vendors who could create them once they get the OK from him.

Should it take off, the grand vision is connecting with design, transportation (as one is inspired by the London Underground system) and art museums to see “if they would like TypeKits to make apparel for you.”

“I know the hipsters will like it,” he joked after mentioning how he’d ask companies like Urban Outfitters the same question. “The fun thing is trying to make it look good, and the crests to seem credible.”

'EVERY ONE OF THEM TELLS A STORY'

As it pertains to Comic Sans – a typeface that people often mock – he initially had four stars on the design, to represent the curse word starting with the letter “F.”

“Take the ‘U’ and the ‘K’ out, though, and it becomes F.C. Comic Sans,” he laughed. “I wrestled with the ‘Johnson’ font. I knew it was something I wanted to do. I lived in London for 12 years and every summer, it seemed like the tube drivers went on strike. On the sleeves, it’s the tube map. The idea was the ‘London Tube Strikers.’”

With another design – that for the typeface Optima – he knew he wanted it to reflect "optimism, something sunny," which is how the radial sunburst concept came to be, with creator Hermann Zapf’s name written in “dingbats typeface.” 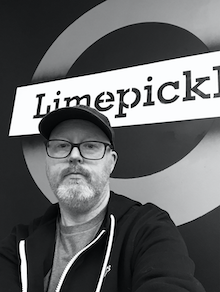 The design with the most local ties is Franklin Gothic. It includes a “Liberty or Death” badge reminiscent of the Philadelphia Union’s mantra, with numerous nods toward Benjamin Franklin – lightning bolts, a kite and a key – along with the Betsy Ross U.S. flag star formation and colors from Philadelphia’s civic flag.

Sure, those details might be a bit too insider-baseball for lay people, so Jenkinson included information about both the typeface and design for each style on the Kickstarter page. Consider it Typeface Soccer Jersey 101.

“I couldn’t just make up the design without some relevance to the typeface or history of typeface,” he said. “I’m building history into each of them. Every one of them tells a story.”

Should the Kickstarter goal be met, the first run will be 100 of each design, and 200 with the shirt/scarf “supporter’s pack” combo.

Those who pledge $45 or more will get a jersey and $65 or more will get the combo. There’s also packages for $1,500 and $3,000 or more, which he envisions as typographers or type foundries seeking 25 or 50 custom shirt-design services “to promote your own typefaces.”

So, what are Jenkinson's favorite typefaces? Helvetica “because it’s so functional and utilitarian” along with Gotham (even if it’s “kind of overused now”) and Frutiger.

For now, though, Jenkinson will wait and see if the demand is there, and if the trademark reviews allow him to proceed. If it is, and they do, he’ll be ready to meet those orders, and hope it blossoms from there.

“I’d like to see it grow, to appeal to bulk buyers,” he said of a project for which $1,669 had been pledged by 32 backers as of Monday afternoon. “This could have global reach.”