By Matt Mullin and Kyle Neubeck 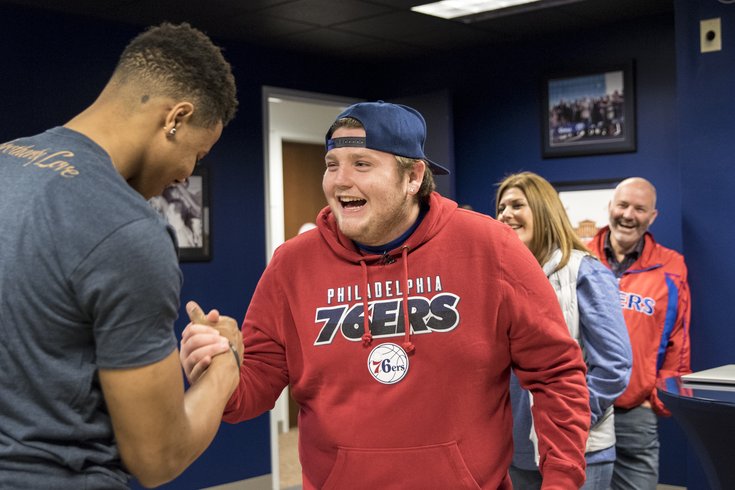 With his parents looking on, Mike Shelly, right, meets with Markelle Fultz prior to Monday night's game against the Jazz.

A TV timeout early in the second quarter of Saturday night's loss to the Golden State Warriors may actually have been the high point of the Sixers' season so far. Not only was the home team up 20 points on the reigning world champions, but everyone in attendance won a free Chick-Fil-A chicken biscuit thanks to 17-year-old Mike Shelly of Newtown Square.

The sellout crowd at the Wells Fargo Center, still riding high off the Sixers' fast start, erupted – in part because they were all getting free sandwiches, but more so because of the impressive performance they just witnessed from Shelly, who defied the odds by making the three-pointer and half-court shot on back-to-back attempts.

"Honestly, that all happened so fast," Shelly said prior to Monday night's 107-86 win over the Jazz. "I got brought down, and they tell me [I'm on during] the second TV timeout. Then right when it happened they push me on the court and are like, 'Go, go, go,' so I'm like, 'OK.' Then [in-arena host] Christian [Crosby] explains it real quick.

"So then I start shooting, and right when I got toward the three-pointer and I wasn't making them, I could feel it kind of quieted down. But after I hit the three-pointer, everyone was like, 'Oh my God, he's going to have a chance to make it.' Right when I took the half-court [shot], I was looking at it like, 'Oh, God. That might go in.' I honestly didn't expect it; I had to chuck it up real quick. And when it went in, it was the loudest I'd heard the place all night, for my half-court shot.

"Obviously, it was a once-in-a-lifetime opportunity to stand in front of the sold-out crowd at the Wells Fargo Center and everyone chanting for you. It was amazing."

Believe it or not, that's only the beginning of Shelly's incredible story, one that's seen him overcome much more difficult odds in recent years and somehow remain positive in the face of tragedy.

At age 14, just prior to his freshman year at Marple Newtown High School, Shelly was diagnosed with stage IV Burkitt lymphoma, "a high-grade B-cell non-Hodgkin's lymphoma. The rare and aggressive form of cancer causes the cells in a person's lymphatic system to abnormally reproduce."

Although what I've been through is a lot and it sucks, you just have to make the best out of it and take what you can from it. Be positive, and take it one day at a time.

But he beat it. And just over a year ago, Shelly was declared cancer-free.

It's that kind of perspective on life, one no kid should ever have forced upon him at such a young age, that kept Shelly so calm as the final seconds ticked off the clock on Saturday night. Beating the buzzer from half court was just a bonus.

"I didn't want to upset the fans," Shelly said with a laugh, after admitting that he's rewatched his performance at least 30 times since Saturday.

To him, just being out on the court was a victory.

"After what I've been through, stuff like [going out on the court at the Wells Fargo Center] is not a worry to me, it's more like a blessing," Shelly said. "I'd say that I'm not really stressed out to go hit a half-court shot; it's more like, I try to take it all in and go, 'Wow, this is awesome. I'm not stressed out about this. I'm going to enjoy it. I'm not going to take it for granted. This is really an honor.'

"Although what I've been through is a lot and it sucks, you just have to make the best out of it and take what you can from it. Be positive, and take it one day at a time."

But in August, that ability to remain upbeat in the face of adversity was tested.

Shelly, now cancer-free and heading into his senior year, tragically lost his only brother, Andrew, in an early-morning traffic accident. He was 20.

This season, Shelly and his father, Michael, have been attending Sixers games as a way to celebrate Andrew's love of the team.

"He'd be right by my side. He'd be loving it," Shelly said as his voice began to tremble slightly. "He was excited for the Sixers, but he'd be happy for me. He was my biggest supporter, so he'd be supporting me, definitely, through everything. He would want everyone to know that I'm his brother though. He'd let all you guys know, 'He's my brother! He's my brother!' So he'd definitely be very happy."

And when the Sixers were made aware of Shelly's backstory – his selection to participate in the Chick-Fil-A Basketball Challenge was happenstance – they decided to take action.

Around 4:15 p.m. on Monday, Sixers in-arena host Christian Crosby called Shelly to see if he'd be interested in ringing the ceremonial pre-game bell. His seats for Sixers-Jazz had also been upgraded to court-side.

All I was told...was that there were going to be a few surprises. I walked on the court and Ben Simmons told me I have a nice shot, so that was pretty cool.

"I was joking with my dad on the way here. I was like, 'The only people I've seen ring the bell were Ryan Howard and Allen Iverson – and now me,'" Shelly said with a laugh. "That's a pretty cool group to be affiliated with, those guys. That's a real honor."

But the true surprises came when he arrived in South Philly.

In addition to being given 76 Chick-Fil-A gift cards, Shelly was also presented with a customized jersey from first-overall pick Markelle Fultz.

Mike Shelly, who beat cancer last year and then wowed fans in Philly by hitting incredible half-court shot on Saturday, is heading on the trip of a lifetime courtesy of @sixers & @ChickfilA! Special thanks to @MarkelleF & @ChristianCrosby! pic.twitter.com/hvZKV7s1mJ

And when the Sixers fly to Atlanta in March to play the Hawks, Shelly will be there. On the team plane. Once there, he'll not only attend the game, but he'll also get an exclusive tour of the Chick-Fil-A Support Center (their headquarters).

"All I was told prior to coming here was that there were going to be a few surprises," Shelly said. "I walked on the court and Ben Simmons told me I have a nice shot, so that was pretty cool. Right now, it's incredible. What everyone's done and what everyone is doing for me right now – I mean, obviously they don't have to be doing any of this. And for their kindness, I can't thank them enough. It's awesome."

Immediately after hitting The Shot Heard 'Round The Delaware Valley on Saturday night, Shelly became a mini-celebrity, which he admitted was all he really hoped for when he found out he'd been picked to go on the court and try his luck.

"They all say that I'm famous and they don't want me to forget about them," Shelly said when asked how his friends reacted. "They say, 'Whenever you do any of this, make sure you say my name.' When I first told them I was going to take the shot at the Sixers game, the first thing we started talking about was what I was going to do to make myself look like a fool to get famous. Like, I'm going to have to wear [something weird], do something stupid – we weren't even talking about making the shot. At all. That was the last thing...

"After the game, I met up with them and they were all so excited. And we're sitting there watching TV and [the replay] just pops up on TV. And I was like, 'Wow.' It just blew up so fast."

More quickly, it seems, is how the Sixers reacted upon hearing about Shelly's backstory. After all, less than 48 hours after his big shot, the team was already ready to surprise Shelly with the bell, the court-side seats, the trip to Atlanta, the jersey, and the list goes on.

Chris Heck, the Sixers President of Business Operations, received an email from a friend on Sunday morning about Shelly and his past. He immediately wanted to make sure the organization did something special for this special fan.

"We had, throughout the day on Sunday, probably 40 to 45 people that were running around trying to do things so we could be ready for tonight," he told PhillyVoice. "And it couldn't have happened to a better kid, a better family."

Then, on Monday morning, Heck's team once again assembled to put the finishing touches on Shelly's big day.

As it turns out, that last part also lines up perfectly with how Shelly is approaching his newfound celebrity.

"People see me out there before they know my story, and they're like, 'Wow, that kid just hit a big shot. That's so cool,'" he said when about his favorite part of all this. "But after people and especially kids with pediatric cancer see [my story] – like, when I went through my whole treatment, it was really awesome to see kids who have gone through it do bigger things, or go on to play in the NFL like Eric Berry, who had cancer and now he plays in the NFL. Like, that was always a, 'Wow! This does get better; things do happen after cancer.' In the moment, it sucks. But if I was a kid in a hospital and saw that – another kid hitting a shot at the Sixers game – I'd be like, 'Wow, he's really enjoying himself.'

"That's the biggest thing, I'd say, would be to help anyone out with what I did."

See, it wasn't the free sandwiches or the improbable half-court shot or the 20-point lead over the Warriors that made this moment in Saturday night's game the real high point of the Sixers' season.

It was Shelly himself, and the idea that his performance could provide hope to even one child currently battling cancer.