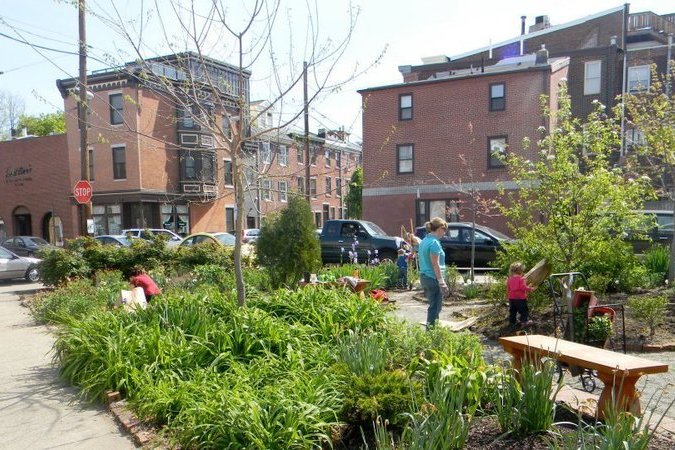 In this undated photo, residents of the city's Bella Vista neighborhood enjoy the once-popular Triangle Park. It has been several years since the park has been fenced off and residents are looking to bring back the park before the land can be developed on.

While it's been a few years since neighbors were able to enjoy Bella Vista's Triangle Park at Sixth and Christian streets, locals are hoping a petition can help bring back the once-beloved outdoor space before a developer builds on the property.

"People want a park there. They don't want development," said Joel Palmer, founder of Friends of Triangle Park and a founder of the Bella Vista Neighbors Association.

The triangular plot – once a gas station – has been fenced off and inaccessible to the public since 2012, Palmer said, but there was once a plan in place to turn that land over to the community.

But due to soil contamination from the gas station, Palmer said funding that had been set aside to purchase the property and keep it a community park is no longer available.

With a petition – which is available online here – Palmer said local residents hope to show legislators that the community wants to revive the once-popular park space.

"It was a nice little park. It was enjoyed by the neighbors, and it sort of sprouted a renaissance of that intersection," said Palmer.

In talking about the history of the park, Palmer said that after the gas station shut down in about 2009, the property's owner, Stuart Schlaffman, allowed neighbors to clean up and green up the area.

"The schools used to release butterflies on that lot," he said. "It's a nice thing to have."

But, Palmer said, now the owner has a developer interested in building on the property.

"They kicked us off and sent a couple guys in with weed wackers," said Palmer. "If you look at it today, there's graffiti there. Now, it's a sad little lot."

Palmer said there is still hope for a rebirth of Triangle Park, however.

In order to build the planned project – a five-story apartment complex with an attached restaurant – Palmer said the developer, Atkin Olshin Schade Architects, needs to visit with the community to discuss the project before they can take the building's plan before the city's Zoning Board of Adjustment to get the necessary variances.

There are several issues with the building as proposed, Palmer said. He noted the plan calls for a building that is taller than what is allowed zoning code. Buildings are on the site would be limited to a height of 38 feet, with an allowance for an eight-foot pilothouse on the roof. The proposal calls for a 67-foot-tall structure.

The developer's plan also calls for the construction of a structure that would occupy more of the property than is permissable, Palmer said. Zoning would allow building on about 70 percent of that lot, leaving 30 percent for green space, but the plan asks for 100 percent of the lot to be built upon.

And finally, the developer would need a zoning variance for a higher density at that lot, Palmer said. The developer likely could only build four apartments with a restaurant on the site. The proposed plan includes 12 apartments.

Yet, Palmer said, whatever the plan may be for that lot, he'd want the land returned to the city for use by the neighborhood in an area sorely lacking open green space.

"Philadelphia, globally, is a city that doesn't have enough parkland," Palmer said. "And, this is really the only open space in Queen Village."

Developers will discuss the plan for the proposed complex at the former Triangle Park site during a meeting of the Bella Vista Neighbors Association's zoning committee to be held at 7:30 p.m. Tuesday at 10th and Fitzwater streets.